Naekawa is the het ship between Makoto Naegi and Touko Fukawa from the Danganronpa fandom.

Makoto finds it difficult to talk to Toko, mostly because of her antisocial nature and the fact that Toko can be very accusative. Toko has expressed dislike for Makoto, saying she disapproves of him, but sometimes thinks of him as reliable. Makoto and Toko survive the Killing School Life together, and become members of the Future Foundation (although Toko is not an official member). In Ultra Despair Girls, it was shown that Toko warmed up to Makoto after the two left the academy.

Toko's bonus mode events are one of the few that are explicitly romantic.

In Ultimate Talent Development Plan during the summer sports festival, if the player chooses "I always want to pull the card on the right..." as Toko Fukawa, she will say that the best card was "Best Friend" but that she couldn't get something that doesn't "exist" but afterwards she'll ask Makoto to come along with her since he wasn't a perfect match but better than everyone else, he'll hesitate for a moment since he was doing scavenger hunt too, but in the end Toko forced Makoto to run with her to reach the goal.

The ship sailed as a result of their friendly interactions in their Free Time Events. Both surviving the killing game has also helped. Nevertheless, the ship itself has some rivals in common that overshadows the ship such as Naegiri, Togafuka, and Naegami. 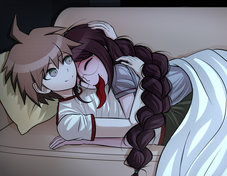