• Cry Into Chest
• The Lost Lenore

Naezono is the het ship between Makoto Naegi and Sayaka Maizono from the Danganronpa fandom.

Makoto and Sayaka went to the same middle school. In the short story "Makoto Naegi's Worst Day Ever," Makoto thinks about Sayaka to cheer himself up after a string of bad luck. He describes her as someone he knows very well, but who doesn't know him. However, unbeknownst to him, Sayaka developed a crush on him after she saw him save a crane from the school pond. She's been constantly looking at him in school since then, hoping for an opportunity to speak with him; but, due to her busy life, she never got a chance to until they both enrolled in Hope's Peak.

Not much is known about their life in Hope's Peak before the tragedy, but it's heavily implied they started a romantic relationship at some point. The photos of their school life tend to show them either close to each other or looking at each other. In her second Free Time Event, Sayaka admits to having romantic feelings for Makoto, while claiming she can't pursue them due to the killing game, thus suggesting she confessed the first time when there was no killing game to hold her back. Mukuro Ikusaba, who knew them before the memory loss, thinks they're on a date when they meet her in the school shop. During Danganronpa 3's Despair Arc, they appear close, but it's not made clear if they're just friends or something more.

Early in the killing game, Makoto gets knocked out by Mondo and wakes in his dorm. In the game, he runs into Sayaka upon leaving the room, while in Danganronpa: The Animation, Sayaka is in his room nursing him. In the following conversation, Makoto reveals he feels inferior to others due to his admittance to Hope's Peak being caused by blind luck rather than skill, but Sayaka reassures him he can be amazing even without an ultimate talent, with her smile and encouragement leading Makoto to become much more confident going forward. Sayaka then appoints herself as Makoto's assistant.

The next day, Sayaka suggests they get some weapons for self-defense in the event they're targeted by a killer. They find a decorative sword in the gym's entrance hall, which Makoto keeps. Sayaka is worried that they wouldn't be able to find a second weapon for her, but Makoto promises to protect her, and to make her feel safe without needing to have one. They then talk about Sayaka's dreams, and she reveals how scared she is of losing everything she worked so hard for years to build due to being trapped in Hope's Peak with no escape in sight. The conversation ends with Sayaka making them lunch.

Several days later, Monokuma gives the students videos showing their loved ones in danger, leading Sayaka to panic after believing the safety of her bandmates was jeopardized. Makoto comforts her by promising her to get her out of the school, no matter what. Touched by his undying optimism, Sayaka cries into his chest until she calms down. Their moment together is interrupted by Monokuma who comments that Makoto's "flagpole" is raising, causing him to become furious and attack Monokuma, blindly ignoring the possibility of being executed for breaking the rules. He misses, avoiding punishment, but the tender moment is ruined. This is one of only two times in the game when Makoto attempts to physically attack someone.

Desperate to protect her friends, Sayaka makes a plan to kill and frame Makoto in order to escape the school. As the rules of the class trials aren't revealed at this point, Sayaka assumes that the frame-up will be temporary, lasting only until she escapes, and Makoto will continue to live in the school. Even so, she's hesitates during a crucial moment, worried about betraying Makoto's trust and committing a murder, which leads to her plan failing and her being murdered in retaliation. As she's dying on the floor, she writes a message on the bathroom wall behind her with her blood to clear Makoto of suspicion.

During the class trial, Makoto initially refuses to believe Sayaka may have plotted a murder due to his complete trust in her, but when Kyoko provides evidence of her guilt, he's forced to accept. He's devastated, but instead of blaming Sayaka for breaking his trust, he blames Monokuma for driving her to such a desperate state, leading him to try to attack him again in anger. This time, Kyoko physically stops him and reminds him he won't avenge Sayaka if he's killed for breaking the school rules. When, later, Makoto doubts whether Sayaka's love for him was genuine, Kyoko reveals the reason Sayaka left her dying message as being her inner conflict over betraying Makoto. Makoto then promises to keep Sayaka in his heart forever, repeating Sayaka's favorite psychic joke to confused Kyoko.

In Danganronpa 2, Makoto leaves several mementos of Sayaka inside the Neo World Program; among the presents available in the Monomono Yashine, there is the sword replica Sayaka gave him, and a sword-fighting technique named after her. He also uses Sayaka's dying message as a code to the trial grounds. During his conversation with Hajime, Makoto describes Sayaka as someone close to him and reveals that the code was used to save him. Sayaka's significance to Makoto and the meaning behind the code are later used by Hajime to tell the real Makoto from an impostor.

In episode 10 of Future Arc, in his hallucination, Makoto is told he should be killed by the two people he was the closest to - Sayaka and Kyoko. Sayaka also reminds him of his promise to help her escape from Hope's Peak Academy, which he failed to keep.

In Super Danganronpa 2.5: Nagito Komaeda vs. the World Destroyer, in Nagito's illusionary world, Sayaka shows a clear attraction to Makoto. Makoto is also much more flirty with her. The two are later seen walking together, apparently as an official couple, much to Mukuro Ikusaba's jealousy.

In Danganronpa IF, Makoto starts recovering his memories from before the killing game early on. One of the first things he thinks about is his desire to protect Sayaka, before realizing he trusts and cares about all of his classmates as much as he cares about her. Sayaka plans to manipulate Makoto as she did in the game, but she drops her plan when Makoto gets sick, proceeding to nurse him through the night. Despite not going through with the plan, Sayaka still feels horribly guilty about considering it. When Makoto gets injured protecting Mukuro, Sayaka is the first one to scream, though her attempts to help him are stopped when Monokuma reveals Mukuro's connection to Fenrir. He also suggests Makoto and Mukuro were lovers to get under Sayaka's skin. Near the end, Sayaka resolves herself to confess her crime to Makoto.

In Danganronpa V3's Ultimate Talent Development Plan, Makoto and Sayaka have two events with one another. In their first event, they eat lunch together at Hope's Peak's cafeteria. They enjoy each other's company; Sayaka speculates that Makoto would like to do it again some time, and he admits that he does. They agree to eat together again in the future. In Sayaka's last event, she talks to Makoto at night about her upcoming concert, and he promises to continue cheering her on in the future, even after they've graduated.

Sayaka is one of the possible romantic options in the School Mode of Danganronpa. Among the events that net a good reaction, Makoto can ask her to sing for him or suggest making food together. In her ending, she's happy that she can finally be with him and says she always believed it would happen due to the promise Makoto made to her in the main game.

“Can I...can I believe what you said? That you'll help me get out? No matter what it takes...? Makoto... You're the only one I can trust. So please... No matter what happens, please always be there for me. I need you on my side...”
— Sayaka to Makoto in Chapter 1 of Danganronpa: Trigger Happy Havoc.

“Having you by my side really makes me feel a lot better. If you weren't here with me, I just don't know what I'd do. I'd be lost... I hate that we had to meet again under such awful conditions, but... I'm relieved you're with me.”
— Sayaka to Makoto in their first Free Time Event.

“Let's get out of here together, Makoto. No matter what... Please don't turn your back on me, okay? I want you to know something, Makoto. And I want you to know that I mean it- I can't fake my feelings... I'm... really glad you're here.”
— Sayaka to Makoto in their last Free Time Event.

This ship is quite base-breaking amongst the fandom. Some fans abandoned it after it was revealed that Sayaka was going to frame Makoto for killing Leon to get away with murder and escape. Naegiri being hinted to be canon going forward in the game also helped. However, there's still a portion of the fanbase that prefers this ship over Naegiri as they feel that Kyoko's feelings towards Makoto are always a little unclear. There are also fans who ship both Naegiri and this ship, often resulting in Naegirizono. 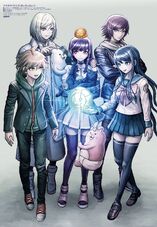