Nagito × Hope is the cargo ship between Nagito Komaeda and hope from the Danganronpa fandom.

Nagito has loved hope, and has an obsession with it, as mentioned many times and shown throughout the game, manga and anime. He states to Hajime that he is "in love" with hope, and seems to be willing to do anything, including giving his own life, the lives of others, and spread despair in order to achieve "absolute hope". Along with that, he admires his classmates for being "the symbols of hope"

In Super Danganronpa 2 Goodbye Despair, a lot of his actions revolve around his obsession with hope. In chapter 1, he shows his true colors by laughing maniacally, and explaining how amazed he is to watch "the symbols of hope fight against the despair of their friend's death". This causes him to be distrusted for his sudden breakdown, and he continues to have weird behavior revolving around hope. In the fifth chapter, he goes out of his way to attempt to kill himself and all of his classmates (except the traitor) after finding out that they're all remnants of despair.

During the Demon Hunting game, he collaborates with Monaca Towa, whom wanted to become a "second generation Junko Enoshima", believing that his actions were "a stepping stone for hope".

Nagito's obsession from hope comes from his luck cycle. After so many good, but also bad things happened to him, because of his luck Nagito began to develop a strong faith in hope, so that he could find some meaning in his life. In Danganronpa 3: The End of Hope's Peak Academy, his obsession with hope is also seen in some scenes. For example, after Nagito is under effect from Hiyoko's tampered stew, Nagito states that hope feels amazing, while blushing. Junko later even refers to Nagito as "the biggest hope fanboy" she's ever seen.

He continuously shows that he value hope over his own life, to the point it becomes a problem. This unhealthy obsession lead to people avoiding him or being scared of him.

“Please, don't forget... From the bottom of my heart...I am truly in love with the hope that sleeps inside you.”
— to Hajime Hinata.

“After all, we're both friends who yearn for hope!”
— to Hajime Hinata.

“...But that is precisely what makes his death worthy to serve as a stepping stone... for enhancing your radiance as the 'Symbols of hope'.”
— to Hajime Hinata.

“Hinata, you should be more confident. After all, you are simply pursuing the hope that you personally believe in.”
— to Hajime Hinata.

“Keep going, Hajime! Show me more of your hope! Is it strong enough to smash Hanamura's hope to pieces...?!”
— to Hajime Hinata.

“...I love each and every one of you as the symbols of hope... The ultimates!”
— to Teruteru Hanamura.

“There was always the possibility he was the one... the one I'm searching for... 'The absolute hope capable of overcoming any despair.”
— to Hajime Hinata.

“Rejoice! After all, you will serve as the glorious sacrifice that unites everyone with even greater hope!”
— to everyone in the first trial.

The ship can be taken as a joke, and is considered a meme. It happened with the idea of shipping one of the things Nagito loves. Some would see the great lengths he goes to and the risks he takes for the sake of hope to be "dedication". Others would say that his unhealthy obsession makes up who he is as a character. Considering how a large portion of his character and dialogue revolves around hope. A lot of the fandom's insider jokes and nicknames for Nagito also revolve around his obsession with hope.

Although Nagito x Hope is a popular cargo ship within the Danganronpa fandom, it still gets overshadowed by other Nagito ships, such as, Komahina and Kamukoma.

Nagito confesses his love for hope 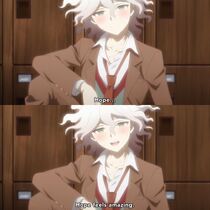 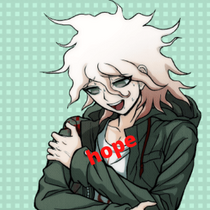 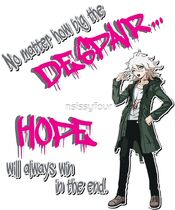