• Because You Were Nice to Me
• Opposites Attract

Nanamiki is the femslash ship between Chiaki Nanami and Mikan Tsumiki from the Danganronpa fandom.

Chiaki and Mikan are shown to be on very friendly terms with each other.

In Chapter 2, Chiaki is shown to be spending time with Mikan in the Mirai Hotel lobby. Mikan remarks how kind Chiaki was for teaching her how to play games, and even playing a round against her. Right after Mikan explains that she was happy to be able to play with a friend, which is one of the few instances where Mikan does not apologize for assuming that someone is her friend. After being thanked, Chiaki interjects by saying that Mikan doesn't need to thank her as she had fun too. Hajime Hinata's internal dialogue highlights this as he notes how this was the first time he had ever seen Mikan that happy, and that he should thank Chiaki for it.

In Chapter 3, Chiaki is shown to be clearly disappointed in Mikan after the latter gets infected by the Despair Disease and recalls her memories as Ultimate Despair. Because of their previous interaction and Chiaki's nature as an AI, this can be due to not being able to rehabilitate Mikan as she was supposed to, and feeling disappointed in herself. Though it can also be taken as Chiaki simply being upset about losing a friend she had made herself.

In the same chapter, during the trial, the localization has Chiaki remark the retelling of Mikan sleeping on Hajime as "too much info". In the original Japanese, she says "gochisōsama" in response, which can be taken as sarcasm, as it's a phrase used most often after eating/being treated to a meal, which roughly means "thank you for the meal".

The ship sailed as a result of Chiaki's kindness towards Mikan in the beginning of chapter two, along with the nurse's apparent happiness and comfort at being Chiaki's friend, despite her usual struggles with those very things. Fans also believe Chiaki would treat Mikan good, and help her with her past trauma. Most fan fictions with the two tend to depict a Non-Despair au, often featuring Komahina along with the pair as well. 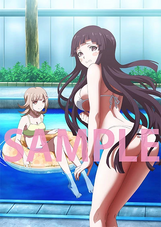 Nanatsumioda refers to the ship between the two and Ibuki Mioda