“If you attack Konoha, I will have to fight you… So save up your hatred and take it all on me, I'm the only one who can take it! It's the only thing I can do! I will shoulder your hatred and die with you! Because I'm your friend! ”
— Naruto to Sasuke

Naruto Uzumaki is a character from the Naruto series.

He is a ninja from Konohagakure who eventually becomes the seventh Hokage. He is also the host of the nine-tailed fox Kurama for most of the series and is known for being the savior of the village. Naruto is also one of the few members of the Uzumaki Clan until his son Boruto and his daughter Himawari was born.

SasuNaruSaku - the ship between Naruto, Sasuke and Sakura

While Hinata had a crush on Naruto since they were children, he did not pay as much attention to her. However, he became upset when her cousin Neji beat her up in battle and called her a failure. Naruto eventually defeated him in her stead. Hinata eventually confessed to Naruto in the middle of his battle with Pain which surprised him. She was almost killed which enraged Naruto to the point of nearly releasing the nine-tailed fox. However, she turned out to be fine.

Naruto and Hinata saw each other again on the battlefield in the Fourth Shinobi World War. Neji was killed and Naruto was distraught until Hinata reminded him that his death should not be in vain. He then held her hand as they distributed Kurama's Chakra. Two years later, Hanabi is kidnapped so Naruto and Hinata go to save her. Naruto confesses his feelings to her and they kiss after Toneri is defeated. He eventually marries Hinata and has two children with her.

Naruto had a crush on Sakura for a long time. However, she only had eyes for his rival Sasuke. Naruto refused to give up on her and was eventually placed on a team along with her and Sasuke. When Sasuke left the village, Naruto promised her to bring him back but kept failing in his attempts to do so. After over two years of training, Sakura noticed how much Naruto had grown and began to respect him.

After Sai pointed out Naruto's love for Sakura, she confessed her love to him and begged him to stop chasing Sasuke. However, Naruto could tell that she was not sincere and explained that he also wanted to bring Sasuke back because of their friendship. They would later fight together during the war and Sakura performed CPR on Naruto when he was nearly killed. Two years later, Sakura realized Naruto's love for Hinata and encouraged him to go after her and stop her wedding with Toneri.

Naruto and Sasuke had a rivalry since they were young. Sasuke was the most popular boy in the class and Naruto was jealous of him. This was further inflamed by the fact that Naruto had a crush on Sakura who had a crush on Sasuke. They were eventually placed on a team together along with Sakura. Naruto felt even more motivated to surpass him. However, they also slowly began to respect each other.

Sasuke eventually began to feel jealous of Naruto's abilities and left the village in order to train with Orochimaru. Naruto attempted to retrieve him but failed. Even when Sasuke was labeled as an enemy of the village, Naruto refused to give up on him. During the Fourth Shinobi World War, Sasuke finally decided to side with the village and fought alongside Naruto. However, after Kaguya was defeated, Sasuke decided to turn on the Kage so Naruto had to fight him again. He won the fight and Sasuke finally came to his senses.

Boruto is the son and first child of Naruto and Hinata. He has blonde hair and blue eyes like his father and has two of his nine-tailed fox whiskers as well. Boruto has the Jōgan in his right-eye which he awakened on the day he was to start at the academy when he saw Denki being possessed by a Negative Chakra, and has one kāma in his right hand. Boruto is a class clown like Naruto and does things to get attention since Naruto is always busy with Hokage duties. Unlike his father, Boruto has no desire to become Hokage and wants to be a strong ninja like Sasuke instead. He is a Genin on Team Konohamaru along with Mitsuki and Sarada Uchiha. Boruto's name pays tribute to Neji as his name means bolt and Neji's name means screw.

Himawari is the daughter and second child of Naruto and Hinata. She has dark blue hair like her mother and has whiskers from the nine-tailed fox and blue eyes like her father. Himawari has the Byakugan which she awakened after her brother Boruto tore her stuffed animal and she knocked her father Naruto unconscious my accident. Himawari shows a great amount of respect towards Hinata's deceased cousin Neji and often visits his grave with her.

Kawaki isn't biologically Hinata and Naruto's son, but he's taken in by Naruto who raises him as his own child, during which he develops a brotherly bond with Boruto and Himawari. He has grey eyes and bushy black hair, in which the sides are shaven and blond in color. He has a tattoo of the roman numeral IX ''9'' under his left eye and has one kāma in his left hand. He shows a deeply respect to this Uzumaki family, specially to Naruto, after letting him leave in their house, though he had some fights in the beginning with this family. However in the flashfoward it's unknown what place Kawaki sent Naruto in the flashfoward and what happened between him and Boruto that causes them to fight in the future. 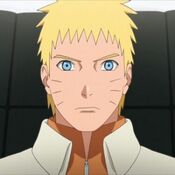