• Aborted Declaration of Love — Nate had plans to confess how he felt to Dani but had second-thoughts, until Dani told him to just say what he wanted to say.
• Battle Couple — They fight side-by-side as teammates on the New Mutants.
• Crush Blush — During their brief vacation in Madripoor both Nate and Dani blush when it is hinted by Amara that they like each other.
• Everyone Can See It — All their teammates knew there was a thing between them.
• God Couple — They have the potential to be this, with Dani being a Valkyrie of Hel and Nate being an Omega-Level and the Mutant Shaman.
• Headbutting Heroes — Started out like this with Dani often mocking Nate in order to hide her feelings.

NateDani is the het ship between Nathaniel "Nate" Grey and Danielle "Dani" Moonstar from the Marvel fandom.

Nate Grey and Dani Moonstar had been aware of each other for quite some time. Both being auxiliary members of the X-Men and its many split-off teams, However, as X-Man, Nate would generally choose to act solo as the Mutant Shaman watching over the 'tribe' of Earth. While, Dani as Mirage usually was a member of teams like the New Mutants and X-Force.

The two would first properly meet when the leader of the X-Men, Cyclops (Scott Summers), sent the New Mutants, being lead by Dani, on a rescue mission to save Nate who had been captured and tortured for months by Norman Osborne. When Dani's team had located Nate they found him in the clutches of Sugar Man, who was using Nate's powers to try and open a portal back to their native reality, Earth-295 (Age Of Apocalypse). Dani and her team were successful in rescuing Nate, and preventing him from ending up in S.H.I.E.L.D. custardy. Unfortunatly, Nate had suffered from severe nerve-damage, which reduced his god-like powers to a mere fraction of what they were. Concerned, Dani watched on in the medical ward. She knew all too well what it was like to lose your powers, as she completely lost her's after the M-Day event.

After some time Dani had asked her old therapist friend Gus Grim to aid in various issues with her team members. Dani included Nate in this, whom she indicated to Gus first, noting his recent trauma. Dani struggles to explain the nature of Nate's, Cable's and Cyclops' convoluted, inter-reality, inter-temporal father-son relationship.

Durring the events of Fear Itself Dani goes missing when she is sent to meet with Hela. When the New Mutants learn of their leader's disappearance they elect for a search and rescue. Nate is present for this decision, and while he is initially torn between looking for Dani and the immediate threat of the Juggernaut, he chooses to aid the team out of a sense of obligation. They literally go through hell before the manage to find Dani, in Helheim. While the team is defending Helheim Nate confides to Sunspot (Bobby Da Costa) that he felt that Dani wouldn't want him as part of the team due to his lack of powers. This indicating that Nate actually wants to be part of the team and cares about what Dani thinks of him. Ultimately Nate devises a plan, which Dani agrees with, and succeeds in saving Helheim.

When the entirety of the X-Men are torn in two, due to the Schism between Cyclops and Wolverine, Dani personally asks Nate to join her team. Nate agrees and they move in together in a sharehouse, 1128 Mission Street San Fancisco, as the teams new base of operations. As they are moving in their new landlord, Mrs. Livitz, mistakes Nate as Dani's boyfriend, to which Dani denies to be the case with an embarrassed grin on her face.

Over the next few missions Dani openly mocks Nate with playful jokes and jabs, to which Nate usealy just rolls his eyes. However, this comes to a head on Paradise Island, when the two end up having a full blown argument and Dani outright insults Nate. Nate calls Dani out for this and she immediately apologizes. Cypher (Doug Ramsey) who can read body language says, "She is, in fact, attracted to Nate, and is trying to disguise that fact by being overly harsh to him."

For the remainder of the mission on Paradise Island Nate and Dani become more complimentative and much more handsy with each other, paying close care to each other's wellbeing. The two are even forced to move as one when their hands become stuck together.

The team is in low spirits after Paradise Island, so Blink (Clarice Ferguson) teleports everyone to Madripoor for a short vacation. Durring a festival Magma (Amara Aquilla) teases Dani for liking Nate. Dani tries denying it, but she blushes fiercely when Nate walks past. Not being the greatest in social situations Nate walks off to drink by himself in an alley. Dani follows him and asks him to dance with her. Initially Nate tries to decline but Dani insists and he joins her. Dani tells Nate that he has not spoken much since Paradise Island. Nate reveals to Dani that he had planned on telling Dani how he felt about her, but after everything that had happened he was no long sure of the right thing to say. Dani responds by telling him to shut up and say it anyway. Then they both embrace in an intimate kiss.

Dani and Nate remain on the team together for several more missions. Over this period Nate becomes some what protective of Dani, rushing to her aid when ever he feels she is in danger. Durring a celebration held at the team's house Dani is approached by Cannonball (Sam Guthrie), who happens to be her ex. Sam tells Dani that he doesn't want things to be awkward between Nate, Dani and himself. Dani states that regardless of whatever is going on between her and Nate, that Sam will always be her friend. Nate and Dani are later seen holding each other as they mingle with thier guests.

Eventually the team members went their separate ways. Despite this, when Dani joined the superhero team the Defenders, Nate remained close to her. The pair finally officialy confirmed their relationship status, when the Defenders' significant others were called in. However, due to some confusion Cannonball was also called. This lead to Nate telling Sam straight up that he was with Dani. Sam stated that it was cool, and that he had his own thing going on now being an Avenger.

At some point before Nate becomes possessed by the Life Sead, Dani professes that she loves Nate.

When Nate becomes possessed by the Life Seed he singlehandedly defeats the majority of the X-Men, Dani was not present that this time. Seeming have killed 99% of the X-Men, the truth is that Nate transported everyone to a pocket-dimension, created by the Life Seed's influence, that outlawed love. Despite not being present at the battle against Nate a version of Dani appears within the Age Of X-Man dimesion, possibly as a subconscious act by Nate against the influence of the Life Seed. This Dani is instramentle in the final confrontation against Nate, and allowing him some semblance of control over the Life Seed. Dani reminds Nate that love and relationships are a part of us and make life worth living. When the X-Men returned to Earth-616 Cyclops asked Dani if she knew what Nate had done, Dani just replied she knew she would see everyone again someday.

At present Nate remains in the pocket-dimesion trying to control the Life Seed, while Dani is on the island of Krakoa once again leading the New Mutants.

NateDani is somewhat of a rarepair, with there seemingly only being a handful of fanworks out there. This may be due to the fact that both Nate and Dani could be considered as 'B-list' characters within the X-Men, and the Marvel fandom overall.

Of what fanworks there are they majoritively don't deviant to much from established earth-616 canon. Such is the case in the The Armless Cheyenne, a fan fiction written by technosagery. The story takes place in the period between New Mutants #50 and Fearless Defenders #1, while it focuses primarily on Dani Moonstar trying to work out what she is going to do after the events of Avengers vs X-Men. After Cyclops had been arrested and Sunspot and Cannonball had left the New Mutants to join the Avengers, Dani is struggling to find purpose. There are several moments through the fic where Nate Grey joins Dani in her bedroom to offer advice and try to help. At one point it is stated that Dani is attracted to the male members of the Summers' family (which includes Nate}. As Dani begins to regain her focus Nate joins her once again to offer some words of encouragement, but also to sneak a peak at Dani's new skin-tight costume. The story ends with Dani kicking Nate out of her room but then suggestively saying he can 'come back later'.

Nate and Dani also semi-frequently appear together in the satirical comic created by magickmaker, poking fun at more obsurd accurances in comics. Such as what would be the legal ramifications for sleeping with someone who had been artificially aged up, or ridiculous nature of Age of X-Man.

While fanworks for this pair is somewhat scarce, fan discussion of the relationship between Nate and Dani has been quite frequent on forums when it was considered 'relevant'. This relevant period was primarily between 2011-2013 (during the publication of New Mutants and Fearless Defenders) and 2019 (during the events of Age of X-Man). At these times there appeared to be a fairly even divide between fans both supporting and against Nate and Dani being together. 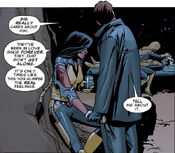 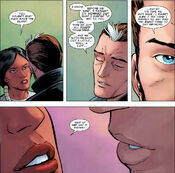 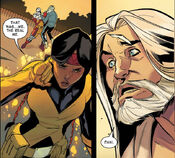 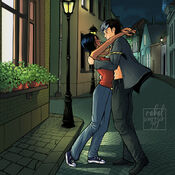