Nathanette is the het ship between Marinette Dupain-Cheng and Nathaniel Kurtzberg from the Miraculous Ladybug fandom.

Marinette has been friends with Nathaniel since the previous school year and thinks that his art skills makes him an excellent artist, all while being unaware that he has a secret crush on her until Chloé saw his comic strip drawing of "Super Nathaniel" saving Marinette and curly reveals his secret feelings to everyone in "The Evillustrator". When Nathaniel was later akumatized into the titled villain, his feelings for Marinette maintained, and while Marinette agrees with Evillustrator that Chloé is egotistical and mean, her secret role as Ladybug tells her that she may have to hurt Evillustrator in order to help Nathaniel to become his normal self again; but not before she asks the akumatized villain to promise her that he'll leave Chloé alone. Evillustrator was indeed hurt and broken hearted when he learns the only reason that Marinette excepted his offer of going on a date with him for his birthday was so she could help Cat Noir trap him, and begins to angrily announce that her betrayal makes her no different from Chloé. Shortly after Ladybug and Cat Noir were able to defeat Evillustrator, Nathaniel's romantic feelings for Marinette faded away and were replaced with a crush he begins to have on Ladybug and had started to draw her. All while having no idea that the two girls are one and the same. Despite Marinette's actions towards the Evillustrator, she and Nathaniel still remain friends; as he has little to no memory of his time as the artist-themed villain.

Before and after the events of "The Evillustrator", Nathaniel has treated Marinette with politeness and respect, like when he asked her about her campaign in "Darkblade". In "Rogercop", however, Marinette being upset about being accused as a thief by Chloé had her un-attentionally accusing Nathaniel as the possible thief when everyone saw the drawing he had done on the stolen bracelet, and had felt hurt by her accusation. She did felt bad about her words to him, and Sabrina, when she realized that she had placed her classmates in the same accurize position that Chloé had earlier done to her. When Marinette gets attacked by her akumatized grandmother in "Befana", Nathaniel helps to protect her from the titled villain, with the support of their friends.

In "Reverser", it is revealed that the two and a few of their fellow creative friends have taken part in a art club. As well as Chloé conforming that after Nathaniel was de-akumatized by Ladybug, the spotted heroin is all he ever draws of at late. Where most of his drawings have Ladybug fighting beside "Mightillustrator," a reformed Evillustrator that becomes a hero. When Marinette over hears Nathaniel saying that he is good at drawing stories but has trouble writing them, she introduces her him to Marc Anciel; since Marc writes stories about Ladybug and Mightillustrator he can help Nathaniel turn his drawings into a comic book. As Marinette hands Nathaniel Marc's book, without telling him who the author is on Marc's behalf, the title of the story, however, had caused Nathaniel to believe that he is in fact reading Ladybug's actual diary and the story having Ladybug thinking about the former Evillustrator and admiring him from a far, gave Nathaniel hope that Ladybug may in fact have the same feelings that he does for her. He talks to Marinette about the book she gave him to see if it is in fact from Ladybug or if she is messing with his feelings, because Marinette didn't truly know what Nathaniel had asked her and was more focused on her well meaning plan of teaming him up with Marc, she tells Nathaniel where he can find the author. As Nathaniel approaches the person he believes to be Ladybug he blushes, but when he learned that it was in fact Marc he assumed that he and Marinette had used his Ladybug crush as a way to play a joke on him, and becomes angry at both of them. Nathaniel's talk with Alix helped him to realize that he may jumped the gun at them, as Marinette isn't the kind of person to play jokes on people. After Ladybug and Cat Noir got "reversed" by Reverser and knew that Nathaniel is one of his main targets, she asks Nathaniel to help her and Cat Noir stop him and had handed him her yo-yo before she left him and Cat Noir to build the guider that allowed them to de-akumatize Reverser back into Marc. With their earlier misunderstanding sorted out, both Nathaniel and Marc dedicate their first Ladybug comic book to Marinette.

The ship could simply be do to fans that simplify Nathaniel's (former) crush on Marinette, before his feelings switched to Ladybug after she and Cat Noir defeated Evillustrator; while being unware that Marinette and Ladybug are the same person. Fans and supporters of the ship commonly have Nathaniel maintaining his crush on Marinette, while she begins to spend some more time with him so she can give him a chance.

Sometime after Lila was Akumatized into the false Fox Miraculous holder, Volpina at the end of season one, and long before Alya became Rena Rouge, as a true holder of the said miraculous in season 2, fans had assumed that the Fox Miraculous would have been entrusted to Nathaniel; presumably because of his red colored hair. In which would have had him assisting Ladybug and Cat Noir as a fellow superhero. Much like in his and Marc's comic book of their reformed villain selves teaming up with the main duo. 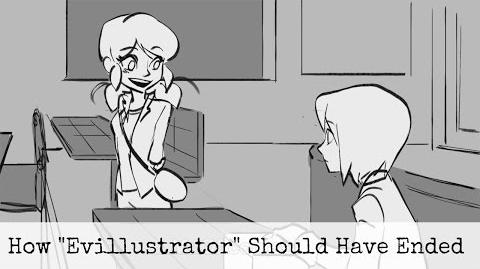 Miraculous Ladybug Fan-Animatic Dub How "Evillustrator" Should Have Ended