Mirio – “Nejire-chan! are you alright?!”
Nejire – “Now that you're here, Togata, I'm fine! Amazing, huh?”
— Thanks to Mirio's arrival to the battlefield, Nejire is strong enough to ignore his injuries and continue to fight with his usual smile.

NejiMiri is the het ship between Nejire Hadou and Mirio Togata from the My Hero Academia fandom.

Nejire and Mirio are good friends, although they are not spoken by their first names, Mirio and Nejire knew each other in their time at the U.A. High School and have shown to be close and care for each other in difficult and dangerous situations. Because Nejire and Mirio have similar energetic and enthusiastic personalities, this often conflicts with Nejire's communicative attitude, much to her chagrin. But even though their similar personalities collide, it also makes it easy for the two of them to talk and interact with each other, unlike Tamaki's calm nature.

Although it is not explicitly stated, Nejire is more interested in Mirio than in other companions of hers such as Tamaki or Yuyu due to the fact that saw the efforts Mirio had to go through to excel at U.A. and just in her first appearance is she constantly seen talking to Mirio and praising ​her skills with Class 1-A. The further the story progresses, it is shown that Nejire cares for Mirio more than for other characters. Mirio is also a force of admiration to Nejire because when he recovered his Quirk, Nejire had a moment similar to a statement of motivation with Mirio since when she was seriously injured she got up to fight only when she saw him back on the battlefield and also told him that he was the reason why he felt supposedly good all of a sudden, showing that Mirio is an inspiration or motivation for Nejire.

Mirio doesn't interact with her as much, but he also respects and encourages her, Mirio is also not bothered by his curious and imperactive ​personality (unlike many characters). Mirio recalls a time when Nejire was talking animatedly to him while they were walking through the School and tells him that his growth is extraordinary and that the two, along with Tamaki, are being known as The Big Three. Mirio listens carefully to her words and Nejire approaches him and tells him that the whole school is recognizing him, while smiling at him.[1]

The first time Mirio and Nejire appear in the story, he can be seen together during Director Nezu's opening ceremony (in the manga only the two were seen at the ceremony while in the anime Tamaki was behind them). In the anime the three of them watch Vlad King explain that two students were fighting each other and after the presentation ends, (in both the Anime and Manga) Nejire animatedly touches Mirio's shoulder to get his attention and tells him that he heard that it was two students from Class 1-A who were fighting and asks if he knows them, while Mirio only laughs silently.[2]

When the Big Three introduce themselves to the students from Class 1-A, Nejire turns the head of the students and is shocked when Mirio challenges Class 1-A students to a fight in the gym and during the fight, Nejire comments that Mirio has gotten stronger.[3] When the fight ends, Nejire smiles cheerfully (with a background of pink bubbles behind her) and says that she wants to explain Mirio's Quirk to the students and tells them the Quirk's name, but Mirio gets ahead of her and explains it to the students. Nejire gets a little angry when she is interrupted and widens her cheeks as she touches Mirio's shirt to get his attention, causing him to turn the head of the students and apologize to her.[4] As Mirio talks about her Quirk with the students, Nejire is seen by her side and watches him intently as she speaks and after the Big Three leave the gym, Nejire tells Mirio that he did a good job of not hurting the students in Class 1-A so much and before Mirio can answer him, Nejire interrupts him and asks if he found him someone interesting for internships. Mirio smiles at him and replies that Izuku seemed smart to him and that Sir Nighteye would like him.[5]

Some time later, The Big Three were about to enter Sir Nighteye's office and Mirio and Nejire smiled at the Class 1-A students before the meeting began. During the meeting, Nejire didn't show any concern when he learned that Tamaki had been attacked, but if he did become noticeably concerned for Mirio when he saw him depressed after the meeting and he was actively trying to cheer him up and convince him not to be too hard on himself during his depression over Eri's situation.[6] During the days leading up to the rescue operation, Mirio had been depressed by what was said at the meeting and both Tamaki and Nejire were worried about Mirio (being the first time that Nejire is not seen with a smile on his face and instead he is shown with a worried face).

Later in the night, Class 1-A and The Big Three woke up preparing to rescue Eri and Nejire in a dream state smiled at Mirio and encouraged him to strive in the mission.[7] After seeing Mirio regain her cheerful personality before starting the rescue mission, Nejire laughed and jumped for joy repetitively in silence and then he approached Mirio a little, laughing happily and jumping again.[8] During Mirio's fight against Overhaul, although he did not mention his name directly, Mirio has memories of him and Tamaki talking with Nejire and remembers when Nejire congratulated him because the whole school is recognizing him.

During the preparations for the Cultural Festival, Yosetsu Awase mentions the Beauty pageant and Mirio mentions to Izuku and Eri that Nejire is in high spirits and that she will participate in this year's pageant.[9] Mirio and Izuku greet her and Nejire is happy to see them and introduces them to her best friend, Yuyu Haya. Nejire mentions that he wants to win the Beauty contest because it is his last year and after seeing Nejire smiling happily, Mirio raised his arm and clenched his fist and confidently tells him that he can do it.[10] When the beauty pageant begins, in the manga there is a panel of Mirio staring attentively at Nejire and in awe of her performance (while in the anime Mirio he gazes in amazed at Nejire along with Izuku and Eri). Nejire internally points out Mirio's name when she realizes he's looking at her during the contest and is glad to see him.[11] After Nejire was declared the winner, Mirio clapped her hands and smiled as a sign of congratulation.

A few months before the Paranormal Liberation War, Nejire is seen helping Mirio take care of Eri by holding her tightly and one day before the War, Nejire was present when Mirio asks Eri to use her Quirk on him. In the Heroes battle against Tomura Shigaraki and the Nomus, when Mirio returned to the battlefield with his Permeation Quirk restored, Mirio was smiling with his characteristic smile but radically changed his expression to an angry one when he approached his companions during the battle, possibly realizing that Nejire was hurt. The first thing Mirio did when joining the battle against the Nomus was to ask Nejire if he was alright. Nejire was glad to see him and replied that it was because the he was there, he was able to get up and fight, despite being very burned.[12] Both Mirio and Nejire protect Best Jeanist and are continually seen fighting side by side until the Villains escape.

While the Ship is sometimes overshadowed by other Ships such as MiriTama or NejiTama, NejiMiri is loved and appreciated by both Japanese and Western Fandom and negative comments about the couple are rarely heard. Due to their similar personalities, it is easier for them to talk to each other and people think they would make a functional and understandable match due to those similarities, besides that Mirio is one of the few people who is not bothered or irritated by Nejire's childish and noisy personality and Nejire finds both Mirio's personality and abilities interesting.

Since Mirio and Nejire prove to be the closest to Eri and play and interact with her frequently in official canon, even hugging her protectively, there have been times when fans show Nejire helping Mirio with Eri in their fanfiction and works of art, even going so far as to imagine them as Eri's parents.

NejiMiri has over 75 fanfics on Archive of our Own.

The Big Three - refers to the ship between Nejire, Mirio and Tamaki Amajiki 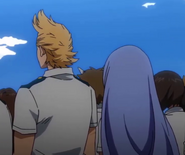 Mirio and Nejire looking at Tamaki

Nejire looks at Mirio trying to make a joke

Nejire asks Mirio if she can explain her Quirk 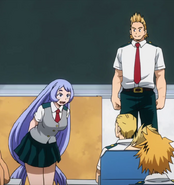 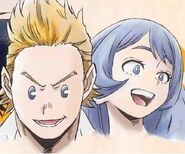 Mirio and Nejire listening to Aizawa

Nejire cheering for Mirio before the mission 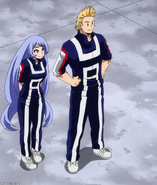 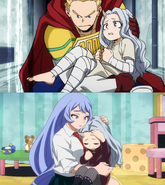 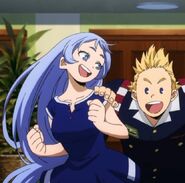 Nejire looking at Mirio during the credits of World Heroes' Mission 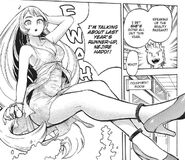 Mirio mentions that Nejire will participate in the beauty pageant 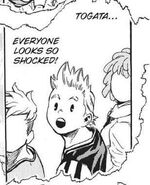 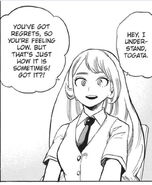 Nejire trying to cheer up Mirio 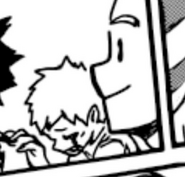 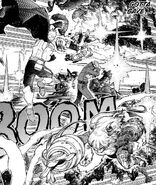 Nejire congratulating Mirio for his recognition

Nejire tells Mirio that he feels good because he is there 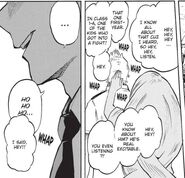 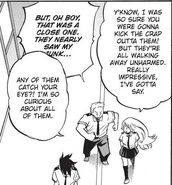 Nejire talking to Mirio while they walk

Mirio and Nejire entering the classroom of Class 1-A

Mirio and Nejire holding Eri in their arms 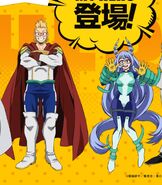 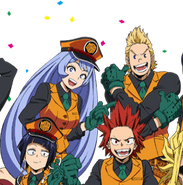 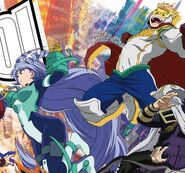 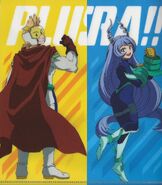 Sir Nighteye glad that Mirio is next to Nejire

Nejire tells Mirio that feeling regretful and depressed is normal

Nejire tells Mirio that they have both become strong 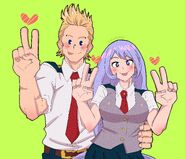 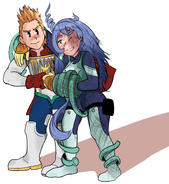 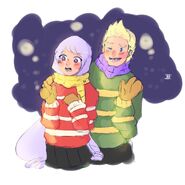 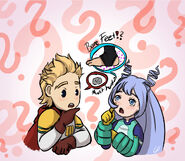 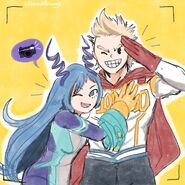 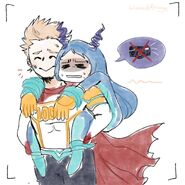 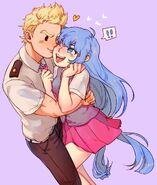 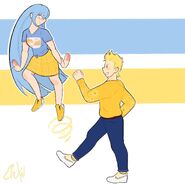 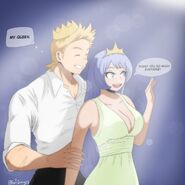