NejiTama is the het ship between Nejire Hadou and Tamaki Amajiki from the My Hero Academia fandom.

During the beauty pageant, Tamaki cheers Nejire on and mentions that she looks like an innocent fairy with enlarged letters. In the anime when Nejire wins, Tamaki is shown smiling when he congratulates her and his reaction is the focus of the shot. Though there is a lack of interaction, they are good friends. They are seen around each other quite a lot. It's also stated in season 4 that both Nejire and Tamaki were singled out as candidates for the Big Three, even before Mirio.

After Tamaki failed introducing himself, Nejire compares Tamaki's attitude with a heart of a kitten, even though he was a human, Tamaki didn't react at the "compliment", because he was way too scared for facing either her or the Class 1-A students. During Eri's incident, Mirio had been feeling down since the notice of that, then later it's seen both Tamaki and Nejire together as both noticed Mirio's status outside the school. They're seen together later at night in a sleepy-awake status getting ready for Eri's rescue.

In the School Briefs Vol. 4, just right before the beauty pageant, Hado, Yuyu, Kenranzanki, Mei, and Kendo were searching for the missing objects of Mei and Kenranzaki, Tamaki shows up for telling the group of girls that he found the culprit, which was a crow. While trying capturing it, Tamaki said that crows were scary up close and couldn't catch them, then Nejire comes up to rescue saying that it wasn't a problem, since she would use her quirk for catching the crows, but then Amajiki alerted Nejire because an enraged crow was coming to her. Meanwhile they were trying shooing the crows, Nejire tells Tamaki that they would shoo the other crows that were left, and asks Tamaki for his confirmation with the plan, which Amajiki agrees with it since that plan was better than "just being pecked at forever". After catching the culprit, in this case the crow, they're not mentioned together, at least Tamaki himself wasn't mentioned in that moment.

The Ultra Analysis databook mentions that Nejire likes to tease Tamaki. In the videogame One Justice 2, Nejire describes Tamaki as being cool in a bind, while Tamaki says her personality is so bright, it's blinding. In her conversations with FatGum and Kirishima, Nejire asks how Tamaki is. During the HeroFes 2020 moment online, Nejire does cute poses and says she wants to be cuter. Tamaki then says she's already cute enough.

In episode 1 of Season 5, the two of them act like villains to help train class 1A. When Tamaki tries to leave, Nejire tells him to stop and that he has to play his role. Tamaki later mentions that while he wants to leave again, he can't because aside from Mirio asking him to help train 1A, and he doesn't want to make Nejire mad.

After the war, the two of them begin working together as Pro Heroes.

This ship gained popularity due their opposite personalities, and/or the Opposites Attract trope. (Nejire being a talkative extrovert, and Tamaki being a shy introvert). Though it is commonly overshadowed by ships like MiriTama. The ship is quite more popular in Japan, however, and has plentiful fanart. Nejire is clearly closer to Tamaki than Mirio as the two of them are seen around each otherlot and they both are in the same class, showing they spend more time together. This is further supported by Tamaki helping her prepare for the pageant. The Ultra Analysis databook says Nejire likes to tease Tamaki, which could be her way of showing affection. In Mirio's flashback when he and Tamaki meet Nejire, she's more interested in getting to know Tamaki. During the festival, Tamaki's look at her in awe and calling her an innocent fairy receives focus. His favorite things are butterflies, which can sometimes be associated with fairies. The anime even has his reaction be the center focus when she wins the pageant. Shippers use Tamaki being at the front to support Nejire despite having social anxiety and hating crowds as him forgetting about due to her.

NejiTama has 97 fanfics on Archive of our Own.

The Big Three refers to the ship between Nejire, Mirio Togata and Tamaki

Nejire looking at Tamaki being concerned for Mirio 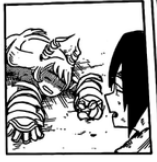 Nejire watching Tamki continue to be shy after the war

Tamaki and Nejire in Mirio's eyes