“At first, I just tried entering because Yuyu told me to, but... at some point, I just started having fun with it!”
— Nejire talking about yuyu: EP 83

NejiYuyu is the femslash ship between Nejire Hadou and Yuyu Haya from the My Hero Academia fandom.

It is unknown if Nejire and Yuyu met before or after entering the U.A. High School, but if it is revealed that Yuyu is Nejire's best friend and in the media in which she appears it has been said that Yuyu considers her beautiful more than any other thing. In addition, both refer to each other by their names instead of by their surname without using honorifics, as is usually normal in Asian countries.

Yuyu is first featured in Episode 83 of Season 4 and Chapter 173 of the manga, and in both media she is shown helping Nejire with the preparations for the beauty pageant that happens every year during the school festival. While Nejire was talking to Mirio and Izuku, Yuyu was looking at dresses for her and explained to one of her classmates that Nejire is more of the "cute type" rather than the "sexy type".

While Nejire explains the reasons why she is in the contest, the manga only shows a panel of Yuyu blushing when she realizes that Nejire is referring to her, but in the anime the scene is lengthened. In the anime Nejire calmly approaches Yuyu, causing Yuyu to blush and look directly at her breasts, and introduces her to Mirio and Izuku, explaining that she originally did the beauty pageant her first year because Yuyu suggested it, but ended up finding it really fun, and continued to participate in them. She adds that since it's now her last year at U.A and her last chance, she really wants to win especially, since she's kept losing to the same girl, Bibimi Kenranzaki.

As the day of the School Festival approaches, Yuyu is seen helping Nejire as much as possible to prepare for the parade. Some time later, Yuyu was also present holding Nejire's dress when she hears Neito telling Itsuka that there is no doubt that she will win. After Itsuka and Bibimi's performances are over, it's finally time for Nejire to perform in the contest and Yuyu can be seen in the audience cheering for her with an intense look on her face, determined for her to win. When Nejire acts by using her Quirk; Wave Motion, to make a rose in the air, Yuyu tells herself that Nejire lost the previous years because she tried to imitate Bibimi's style and says that Nejire has her own strength, while looking at her in awe. At the end, Nejire is declared the winner and Yuyu cries with joy at her victory while blushing.

In Part 4 of School Briefs IV, he tells more about the preparations for the beauty pageant and shows how important Nejire's happiness is to Yuyu. While itsuka walked with her friend Reiko to the room where the students were preparing for the contest, Nejire was next to Yuyu who became more animated when she saw Nejire having fun, until Kenranzaki appears right before them and tells Nejire that she wishes that "may the best woman win", which Nejire agrees saying that she was the best and wouldn't lost against her. Bibimi then complains about Nejire's dress, saying that she had to change. When she asks why, Bibimi apologies, saying that she mistook "that plain old thing for Hado's everyday garb". Nejire seems a little affected by her words, saying that that was mean and the dress was cute. A moment later, when Itsuka was going to stop both girls, Yuyu appears to defend Nejire saying; "Scuse me, Kenranzaki, but could I ask you to back off of Nejire?" with a menacing look in her eyes, which shocks Nejire, Itsuka and Bibimi because Yuyu appeared from nowhere like a "loyal hunting dog ready to defend its master".

Bibimi says that Yuyu didn't had to get really bent out of shape, which left Yuyu with loss of words standing just beside Nejire. After everything calmed down, Itsuka took some time to think about what a surprise it was to see Yuyu act this angry, knowing that she was very sensible the last time she saw her. An angry scream is suddenly heard and it is revealed that Yuyu found a giant nail in Nejire's shoes, causing Yuyu to get angry and blame Bibimi because she assumed the nail was hers. Nejire stops her insisting that it is some mistake because there was no proof, but Yuyu keeps insisting that Bibimi did that to win again, but Nejire told her again to cut it out. Yuyu and Nejire continue their discussion until Bibimi appears again and then offers Nejire to find out the culprit, which she accepts and Yuyu complains about. Nejire says that the more people looking, the better the odds of finding them.

After agreeing to the research, Nejire glances back to Yuyu who was running few paces behind, because she was ready to protest when Nejire volunteered to help but then remained on silent. Itsuka interpreted that both girls were fighting, and when Nejire and the other girls were searching for Mei Hatsume's lost gadget, Itsuka offered to talk with Yuyu. Yuyu says that she was the one who suggested Nejire for being in the pageant originally, and that she was a total cutie to her. Then she says that she was sure that Nejire would bring home the crown, but Bibimi had won the pageant for 2 years in a row, and that if the judges don't see how cute Nejire is, their eyes must be malfunctioning, because nobody in the galaxy can hold a candle to Nejire.

Itsuka then thinks: "It's like she's bragging about her amazing sweetheart?" and that thought made warm her heart, but then Yuyu's face starts to darken and says that she was hurting Nejire for nothing, as for a pageant or not, Nejire was still cute. She says that Nejire wanted to compete and win and Yuyu wanted that so badly for her, that she would do just about anything, but she gets so worked up that it makes Nejire worried about her. This makes Yuyu blame herself, saying that she was the worst. She adds that as they got closer and closer to the big day, she had felt her fuse getting shorter and shorter, making her not even herself. Suddenly, Nejire appears and calls for Yuyu, which surprises both Itsuka and Yuyu. Nejire goes to say something to her, but then is interrupted by Tamaki, who had found the culprit.

After catching the culprit, the situation calms down, but Nejire complains about Kenranzaki saying she has no eye for beauty. Yuyu then intervenes saying that Nejire was more a minimalist and cutesy than gaudy, while she was holding back. Nejire walks over Yuyu, smiling and saying that Yuyu was Yuyu, which confuses her. Nejire explains that she saw that she was being not herself and even if she's not acting like herself that it was still a part of Yuyu. No matter what, that is the whole package, and that package was her good friend. Yuyu asks what if she hated some parts of herself, and Nejire says that if that happens, then she just needed to rev herself up. Nejire then says that she would go on win, because that would make Yuyu happy. Yuyu teasingly says that Nejire was a sore loser and Nejire says that she will rev herself up to win the Beauty Pageant.

Relative to most pairings in the show, NejiYuyu is considered a rare pair, mostly due to the lack of screentime for Yuyu. However, the couple has had a good reception despite Nejire's short time with Yuyu on screen due to the additional data they revealed in the fourth Light Novel⁚ One of the reasons why Nejire wants to win the beauty contest is because of Yuyu, while Yuyu wants Nejire to fulfill her wish to defeat Bibimi and that the rest of the people see her beauty, besides both girls refer to each other by their first name rather than their last name, indicating that they are close.

Some fans like to theorize that the two girls can be lesbians at some point due to different factors that they find about both. On Yuyu's side her profile reveals that she likes cute things and considering that she constantly refers to Nejire as the most beautiful thing in the galaxy, it may mean that Nejire may be Yuyu's favorite person and in the novel he uses words similar to confessions of love to refer to her, even indicated out by Kendo at some point. As for Nejire, shippers like to interpret her love of lilies (yuri on Japanese) as a intentional subtext from the author, or refer to her as seemingly being closer to Yuyu than any of the male characters.

“Nejire is more of a cute type than a sexy type!”
— Yuyu talking about Nejire's type of beauty: EP 83.

Yuyu – “Scuse me, Kenranzaki, but could I ask you to back off of Nejire?”
Nejire – “"Yuyu?"”
— Nejire is surprised when Yuyu gets angry: School Briefs VOL.4.

“I was the one who suggested Nejire compete in the pageant, originally. I mean, have you seen her? Total cutie. I was sure she'd bring home the crown, but then she lost to Kenranzaki two years in a row. Not that she did anything wrong. If those judges can't see how cute she is, their eyes must be malfunctioning, cuz nobody in our whole damn galaxy can hold a candle to Nejire!”
— Yuyu tells Itsuka that no one in the galaxy is cuter than Nejire: School Briefs VOL.4.

“It's like she's bragging about her amazing sweetheart?”
— Itsuka compares Yuyu's words about Nejire to words of love: School Briefs VOL.4.

“So this whole time, I've been feeling like I went and got her hurt for nothing... Pageant or no pageant Nejire's still just as cute, right? But this year, she said she wanted to compete and she wanted to win. I want that for her so bad I'd do just about anything, but when I get so worked up and worry her like that...”
— Yuyu is afraid that Nejire will not be able to fulfill her wish to win the beauty pageant: School Briefs VOL.4.

Yuyu – “Nejire's a little more minimalist. More cutesy than gaudy”
Nejire – “And you're you, Yuyu”
— Nejire is happy when Yuyu is herself again: School Briefs VOL.4.

Yuyu talks about how to use Nejire's beauty

Yuyu blushes next to Nejire 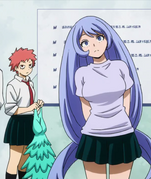 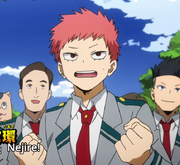 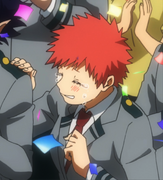 Yuyu blushes and cries with joy at Nejire's victory

Yuyu comments that Nejire have their own strength

Yuyu helping Nejire before the Contest

Yuyu comments that Nejire has her own qualities 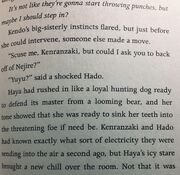 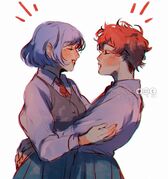 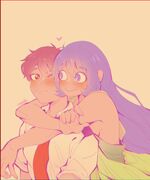 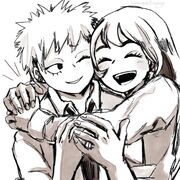 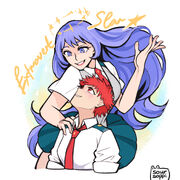 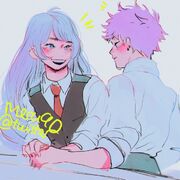 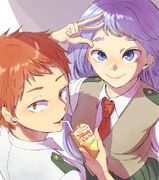 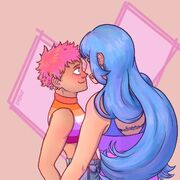