Newtina is the het ship between Newt Scamander and Tina Goldstein from the Harry Potter fandom.

Fantastic Beasts and Where to Find Them

Newt and Tina met in 1926, when Newt was visiting New York. Although they didn't start off on good terms, they became closer during their search for Newt's beasts and eventual encounter with Gellert Grindelwald. Afterwards, Newt said goodbye to Tina, and stroked her hair tenderly. After getting on the boat, Newt rushed back to Tina and asked her if she would like Newt to give her her copy of his book in person. Tina said that she would like that very much.

Fantastic Beasts: The Crimes of Grindelwald

After Newt returned to the United Kingdom and published his book Fantastic Beasts and Where to Find Them, Queen told that an article in Spellbound was published that mistakenly reported that Newt was engaged to Leta Lestrange, when it was actually his brother Theseus Scamander who was engaged to Leta. Believing Newt was with Leta, Tina started dating another man, an Auror named Achilles Tolliver. Hearing about this, Newt and Jacob went to Paris to look for Tina. Newt told Jacob Kowalski that Tina's eyes reminded him of salamander's eyes (Fire-dwelling salamander), and Jacob advised not to tell Tina that.

Newt and Tina met again when the two and Jacob were captured by Yusuf Kama. They managed to escape and took Yusuf with them to Nicolas Flamel's house. They took out a parisite out of Kama's eyes. Newt and Tina left to go to the French Ministry. It was there where Newt revealed his true feelings for Tina, saying that she had eyes just like a salamander's. The two later participated in the battle against Grindelwald, where the two survived and didn't join Grindelwald.

Fantastic Beasts: The Secrets of Dumbledore

In the aftermath of the election for Supreme Mugwump, Jacob and Queenie marry with Newt and Eulalie Hicks and Tina attending. Newt and Tina talked but is interrupted by the arrival of Eulalie Hicks. Dumbledore watches from a distance as he thanks Newt for all he's done before walking away alone.

At some point, Newt and Tina got married. They had at least one child (presumably a son). They had a grandson called Rolf, who married Luna Lovegood, and great-grandsons called Lorcan and Lysander. In the 1990s, they lived together in a house in Dorset with their three pet Kneazles, named Hoppy, Milly and Mauler. 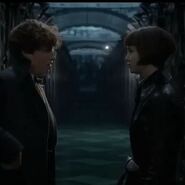