Friends/Comrades/Sisters-in-laws
Both are deceased (post-timeskip)

NezuKana is the femslash ship between Kanao Tsuyuri and Nezuko Kamado from the Demon Slayer fandom.

Kanao and Nezuko first meet in episode 21 on Natagumo Mountain. Their first meeting is rough as Kanao is trying to kill Nezuko, due to Nezuko trying to flee from Shinobu and thus Kanao chases Nezuko through the forest, she rather quickly catches up with Nezuko and attempts to cut her head off. This plan fails due to Nezuko shrinking into child-size and keeps running away, and thus dodging the attacks. As the chase continues Nezuko does not attempt to fight Kanao eventhough she tries to kill her. Kanao is left blaffled by the idea of a demon not attacking humans. When the Kasugai crow calls out to bring Nezuko and Tanjiro to headquarters, Kanao then bends down and asks her "are you Nezuko?".

In the omake, she is also seen bending down a bit asking Nezuko if she's okay with going in the box.

After the Swordsmith Village Arc when Nezuko is able to speak she stays at the Butterfly Mansion, where Kanao also stays. In the omake, Kanao is seen showing Nezuko a butterfly on her hand.

After the fight with Douma, as we see a flashback of Nezuko clinging on to Kanao’s skirt, Kanao says that she values her comrades, Nezuko being one of them.

While Nezuko is returning back into a human she has a flashback of Kanao smiling at her when she was in her box, meaning that Nezuko remember their interactions.

During the final battle in the Sunrise Countdown Arc, while Tanjiro was turned into a demon and had a hold of Nezuko. Kanao arrives with the vale of medicine. She rushes in while using her final form. Kanao injects Tanjiro with Shinobu’s medicine and says "You mustn't make Nezuko cry." after this Kanao gets hit to the ground. Nezuko, who was stil in the hold of Tanjiro, called out to Kanao with tears in her eyes saving Nezuko.

It's shown that Nezuko cares enough about Kanao, as seen when Nezuko referred to her as Kanao-chan, thus implying that there are some closeness between them.

They become sisters-in-law when Kanao and Tanjiro got married.

In chapter 204 we see their reincarnations; Kanata and Touko holding hands, flirting and planning a date.

In Kimetsu gakuen, Nezuko and Kanao (along with Tanjiro) walk home together getting some boba along the way.

NezuKana is fairly popular within the Demon Slayer fandom, with a handful of fans and a scarce amount of fan work. Even though they haven't talk to each other much some fans liked there dynamic between the two and think Nezuko can get Kanao to talk more. This ship is overshadowed by there more popular (canon) ships TanKana for Kanao and ZenNezu for Nezuko. But it can sometimes be shipped alongside ZenTan

This ship it's also supported since both girls got to relate with each other even if Nezuko was still a demon, and how Nezuko didn't even think of harming Kanao when she started running from her when she kicked Tanjiro out cold, unlike how she kicked Tomioka when he harmed Tanjiro, or when she got angry at Sanemi for stabbing her.

This ship is mostly seen as a very close friendship between the two, however people who enjoy Femslash content are likely to ship them in a romantic sense. This ship currently has over 100 works on Ao3.

NezuKanaAo refers to the ship between the two and Aoi Kanzaki 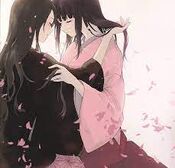