NezuMitsu is the femslash between Mitsuri Kanroji and Nezuko Kamado from the Demon Slayer fandom.

While the two don't have many interactions they still view each other as close friends. Their friendship goes far enough to the point where Mitsuri views her as a younger sister and while Nezuko already viewed her as a family member due the hypnosis that was put on her, Nezuko starts to view her as a sister as well.

The two first met at the Swordsmith Village. During the Hashira meeting while everyone was debating whether or not Nezuko should be killed, Mitsuri seems to be one of the only Hashira besides Giyuu to want Nezuko to stay alive. Although Tokito could possibly count since he said that chances are he'll forget the next day either way. She calls Nezuko 'cute' and 'adorable' on multiple occasions. And Mitsuri seems to deeply respect Tanjiro for helping Nezuko stay alive and remarks that they have an adorable sibling bond. When it turns out that Nezuko would survive she seemed overjoyed since she and Tanjiro could continue their sibling love and that would make Mitsuri happy. After that they both seem to enjoy each other's company whenever they could hang out.

Their actions are quite minimal after that however Mitsuri continues to call Nezuko cute names and gushes whenever Nezuko does the slightest thing that could be qualified as cute. She is often seen playing with her during the Swordsmith's Village Arc. Additionally, Tanjiro braids Nezuko's hair to look like Mitsuri's on a few occasions and Nezuko loves it whenever her hair is styled to look like Mitsuri's. After Mitsuri's death, Nezuko is deeply saddened because in her mind it's like she lost another family member. And she secretly promises to avenge her death.

The ship sailed as a result of the two's cute and wholesome interactions throughout the series despite the fact that they were minimal. However, the ship received mixed feedback due to Mitsuri being a young adult and Nezuko still being in her early teens. A lot of people tend to view this more as a Family ship rather then a Femslash one but it has it's Femslash shippers nonetheless.

It has only a couple of fanficitons on AO3 mostly under the Friendship or Familyship tag and is commonly viewed more as a background ship rather than a main one but it still has a small number of femslash fanfictions dedicated to it.

It is naturally outweighed by the two's more popular ships such as ObaMitsu and ShinoMitsu for Mitsuri. And ZenNezu for Nezuko. Some fans aren't even aware of it's existence due to the fact that they only interact in the manga. And even then it's quite minimal. But still wholesome nonetheless. 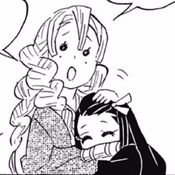 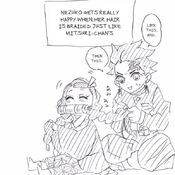 Nezuko getting her hair braided to look like Mitsuri's 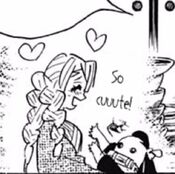 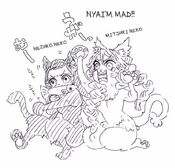