• Brother-Sister Team
• Sibling Team
• You Are Worth Hell

“The bond between Nezuko and I can't be severed, not by anyone!”
— Tanjiro to Rui, Episode 19

NezuTan is the familyship between Tanjiro Kamado and Nezuko Kamado from the Demon Slayer fandom.

Tanjiro and Nezuko are the surviving members of a family of seven. Nezuko was transformed into a demon after their household was attacked by the First Demon, Muzan, when Tanjiro came back the morning the massacre happened, he found only, Nezuko still alive. He then tries to carry her to the nearest village in an attempt to find a doctor and save Nezuko.

On his way there, Nezuko "woke up" as a demon, she tries to attack her brother but after some struggling, starts crying as Tanjiro begs her to hang in there, to not give in to the "demon". Giyuu arrives to save Tanjiro from Nezuko but Tanjiro pushes Nezuko out the way instead and protects her.

Giyuu gets a hold on Nezuko anyway and stabs her shoulder, causing Tanjiro to cry and beg Giyuu on his hands and knees to spare his little sister. Giyuu berates Tanjiro for being so weak and tells him that if he wants to protect his sister, then he'll have to fight for her. Which Tanjiro does - he charges Giyuu with the axe he had, but even though he got knocked out in the process, he nearly landed a blow on the demon slayer after he went down, the diversion gave Nezuko the opportunity to get out of Giyuu's hold. However, despite her starved state, Nezuko didn't eat her brother and instead tried to protect him from Giyuu.

Tanjiro wakes to find Nezuko unconscious and with a bamboo muzzle. He is relieved that Giyuu didn't end up killing Nezuko, and leads her back to where their family was killed to pay their respects, now that he knows Nezuko doesn't need a doctor.

When Tanjiro returns from Final Selection, he finds that Nezuko has awakened and was waiting for him. Tanjiro stumbles from his exhaustion, but Nezuko runs over and embraces him. Tanjiro reciprocates and starts crying as he tells Nezuko how he was so worried about her, and that she was asleep for so long that he was afraid she would go. Following their reunion, Urokodaki reveals that he's created a special box for Tanjiro to carry Nezuko in, so that they can still be together throughout their journey.

When Rui was about to attack Tanjiro with his blood-demon spider webs, Nezuko put in front of him and received all the damage to protect him. Rui after seeing this he asked Tanjiro to give her his little sister, which he angrilly denied since family isn’t something you just give away. At the end, Nezuko and Tanjiro worked together to defeat him, as Tanjiro swang his sword into Rui’s neck and Nezuko used her Blood Demon Art to reforce it.

At the Demon Slaying Corps Headquarters, the first thing Tanjiro asks for once he wakes up is Nezuko and that where she was. Sanemi then appears and is holding the box that Nezuko is in, and stabs her in front of Tanjiro, causing him to angrily and recklessly charge the Wind Pillar and headbutt him.

Tanjiro, Zenitsu and Inosuke got to meet the Hashira Kyojuro Rengoku after getting on the train. Kyojuro saw Tanjiro holding his box on the back and asked him if there is where he transports his sister. Tanjiro agreeded and told him they’re inseparables as they always go to misions together. Kyojuro accepted it and told he was okay with as Oyakata-sama accepted Nezuko.

Thanks to a blood demon tecnique, Tanjiro and the others fell asleep. Tanjiro saw his deceased members of his family in his dreams, and he happily started living with them. Nezuko got out of her box and grabbed Tanjiro’s hand and put it on her head. Seeing it didn’t work, she headbutted Tanjiro, failing again and causing her to bleed. Nezuko got angry and headbutted Tanjiro stronger activating her blood demon art, making Tanjiro smell her blood and realising he was in a dream. Trying to run away from the dream he saw Nezuko, as she asked him what was going on. In tears he begged for their forgiveness for not saving them and for making Nezuko to not being able to see the sun ever again. He was able to wake up and saw Nezuko watching him as she grabbed her head. He smiled and patted her head as her little sister smiled, as Tanjiro told her to wake up the others while he was going to the first wagon to stop the train.

As Tanjiro was fighting against Daki, the string of Nezuko’s box broke, forcing Tanjiro to leave it. Tanjiro strictly told Nezuko to not get out of the box unless her own life is in danger, making Nezuko to worry. Nezuko later disobeyed Tanjiro and got out to defend him since Daki almost killed him. Tanjiro worriedly told her to stay back for her protection, but Daki ended up tearing apart all her body limbs, making Nezuko enraged, to transform back together and revealing her final form. She made many impacts in Daki but got out of control and almost attacked a human, only to Tanjiro to intervene and stop Nezuko. He started singing her a lullaby her mother used to sing them when they were younger. This made Nezuko remember and cried, as she was turning back to her first form and fell asleep in Tanjiro’s legs, as he cried talking to her deceased mother that she finally falled asleep.

She put her back in her box and continued to fight with his comrades. At the end all of them were brutally injured and Nezuko went to check on Tanjiro, curing him an and revealing she has healing powers. Later Nezuko carried Tanjiro in her back and got her back with everyone else, and Nezuko got to heal everybody else.

The reaction to their relationship and closeness is largely positive by the fandom, as both sibling love and care for each other. As the entire story is about Tanjiro turning his sister back into a human and avenging their family, fans have praised how heart-touching their relationship is, especially Tanjiro's determination to save his little sister. Also fans like how Nezuko often hugs and headpats Tanjiro and vice versa, as this little interactions are really cute to the fandom. Fanworks often feature the two with the rest of their deceased family, "reunited" seems to a common theme.

Also many fans find really cute and funny how both sibling have strong heads and often hit others with them, as Tanjiro has headbutted enemies or people that make him enraged, and Nezuko has headbutted Tanjiro twice in the Mugen Train to wake him up, only for the second time for Nezuko to use the Blood Demon Art to finally snap him out of his dream.

Many fans also find cute how Tanjiro is extremely protective of Nezuko, as he defends her when someone talks trash about her or he doesn’t let her join his fight when it comes to a battle he knows he can handle alone, though he doesn't stop her from helping him during the ones that he cannot. Other fans got shock after seeing that even after Tanjiro was turned into a Demon by Muzan and falls under his influence, Nezuko approaches him and tries to hold him back despite the possibility of herself being harmed by him. However, Tanjiro does not attack her even after tasting her blood, but this might be possible due Muzan only asking him to destroy the Demon Slayer Corps and she was never part of it. Still, many fans like to compare this scene with the first one, as Nezuko was attacking his brother, but after hearing his words she stopped it, and instead attacked the Hashira Giyuu Tomioka, since he knocked out his brother.

There are some fans who ship them romantically, but it is generally very frowned upon due to the fact they are blood siblings, and both siblings have other romantical interest, while Nezuko ended up with Zenitsu (ZenNezu) and Tanjiro with Kanao (TanKana).

Nezuko and Tanjiro posts on Tumblr 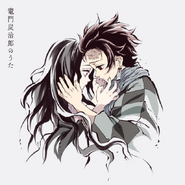 Kamaboko Squad refers to the ship between the two, Inosuke Hashibira and Zenitsu Agatsuma