Ninette is the het ship between Marinette Dupain-Cheng and Nino Lahiffe from the Miraculous Ladybug fandom.

Marinette and Nino are friends and classmates, who both care about Adrien and Alya and enjoy spending time with them. He once had a crush on Marinette and gets nervous about asking her out, but after Ladybug locks him and Alya in a cage for their own protection Nino's feelings for Marinette faded away, as they were replaced by the feelings he and Alya now share for each other. While Marinette knows that Nino is Carapace, whenever she temporally entrusts him with the Turtle Miraculous, as Ladybug, he has no idea that she is the spotted heroin.

In "Anansi", Marinette helps Nino beat Ayla's older sister, Nora, in an arm wrestle so Ayla can be allowed to go with them to watch the World Cup fireworks on the Ferris wheel, by tricking Nora to look away from Nino while she pulls her arm down. Nino want to wrestle with Nora at first, as everyone but Marinette tries to talk him out of it, but she tells him that he can do it. When Marinette had come up with the idea and Nino to show Nora that he can protect Ayla, she didn't realize that her well-meaning actions would lead to Hawk Moth akumating Nora into the title villain. After Ladybug saves Nino from Anansi, as he tries to save Ayla from her, he tries again and Ladybug supports him in his choice while she goes to fetch Nino a Miraculous that he can use and borrow, since Cat Noir stuck to the large spider web that Anansi placed Ayla upon. Once Ladybug got Nino out of the battle and far from its location, she gives him the turtle Miraculous that has the power of Protection, and once the task is competed she'll need him to give it back to her, Nino adepts the Miraculous and the promise to return if after words, before they both go back into the fight. With Nino as Carapace's help Ladybug is able to save their friends and de-akumatize Anansi back into Nora, and because Cat Noir had to leave very soon after Carapace does their signer pound-it with Ladybug, before they too take off so Carapace can de-transform and return the Miraculous as promised in a place that will prevent preying eyes from knowing Carapace's true identity. After words the two go to meet up with Alya and Nora, to let them know that they are alright.

In "Party Crasher", Marinette could tell that Nino and the boys were up to something, since she has become an expert of excuses and knows that Adrien's father is "away" she decides to evacuate, so she could see what Nino and the others have planned for Adrien. When the titled villain attacked Ladybug gets captured and Carapace, along with Viperion and Pegase, were called upon to help Cat Noir fight her captor, but ended up being captured as well; until their new ally King Monkey saves them. Together Ladybug, Carapace and the others were able to defeat Party Crasher. During the clean-up aftermath of the crashed party, Nino tells Marinette that he is sorry for lying to her and the other girls, while he and the guys were having a boys-only party in honour of Adrien; and had told Adrien's bodyguard to keep girls away from it. Understanding that Nino and a few of their male friends care about Adrien and have wanted to show him what it is like to have friends over, Marinette tells Nino that she isn't mad at him, and that there is still time for them to help the girls plant trees.

Some fans believe that Nino still has a crush on Marinette.

Since Timetagger reveals that during the time of their adulthood, Ladybug and Cat Noir have assembled a team of Miraculous holders, that might have Nino as one of its longest members. 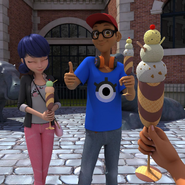