Nora's Arc is the het ship between Jaune Arc and Nora Valkyrie from the RWBY fandom.

Nora and Jaune first met during initiation process in the emerald forest. Her and Ren, him and Pyrrha and everyone from team rwby all eventually found each other and teamed up. During the fight with a giant nevermore Jaune teamed with Pyrrha, Ren and Nora and gave them directions as to what to do. They were then put on a team together with Ren and Pyrrha and the two quickly became friends. In one of the episodes where it was revealed that Cardin was bullying Jaune Nora suggested that she break his legs.

Jaune and Nora participated with Pyrrha and Ren in the foodfight against team rwby in volume 2. In volume 2 chapter 2 Nora and Jaune were seen sitting next to each other in the library. During team Jnpr's fight with team Brnz in volume 3, the four eventually got into an argument with team brnz yelling out they were in the middle of a fight. Jaune then responds "and we're in the middle of a conversation" but eventually an exasperated Jaune then tells Nora to just them with her hammer, which she gladly does.

In volume 4, Nora and Jaune travel together with Ruby and Ren to Mistral. They both fiercly protect and fight against Tyrian Callows when he tries to take Ruby from them. They both also fought together to defeat the Nuckelavee. In the final episode of volume 4 Jaune who is still sulking over Pyrrha's death has Nora and Ren come into his room and Nora rests her head on Jaune's shoulder sadly. In volume 5 when they make it to Mistral Jaune and Nora are then seen preparing dinner together. Jaune then also cheers on Nora during her arm wrestling match with Yang.

In volume 6 Jaune, Nora and Ren become split up from team rwby while trying to mask the emotions of the people on the train and getting them to safety. When cordovin closes the door to the gates in their faces Nora yells out "Oh yeah?, well your face looks like a big dumb boot" to which Jaune responds sarcastically "Way to show her Nora". When team rwby and jnpr eventually regroup and team rwby explains to them what they saw both Jaune and Nora are furious at Ozpin and feel as if they're in a hopeless situation. When Jaune angrily attacks Oscar in a blind fit of rage Nora clearly has a look of shock on her face. In the episode where they all go out looking for Oscar, Jaune comes across a statue of Pyrrha, when Nora and Ren show up they too are shocked. Nora then tells Jaune that her and Ren love him just as much as they loved Pyrrha. In volume 6 chapter 10 Jaune tries to save Nora's life from being hit by the colossus but the end up both taking the hit and having their auras depleted as a result.

In volume 7 Nora jumps on Jaune's shield and uses it as momentum to catapult herself towards the grimm. In volume 7 chapter 3 Nora tries to flirt with Ren to no avail about how she like his new hairstyle and outfit, with Jaune then obviously saying he likes Nora's new outfit too. Nora then leaves annoyed. In the last episode of volume 7 Ren snaps at Nora for failing to get the relic back from Neo, and Jaune cuts him off saying "Ren, that's enough".

Nora's Arc is a rarepair in the RWBY fandom. Both of these characters have many other, more popular ships, like ReNora for Nora and White Knight, Lancaster, Arkos, and Dragonslayer for Jaune. Whether people ship these two or not, most people agree that Jaune and Nora have a loving, close, relationship. 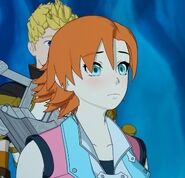 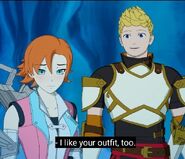 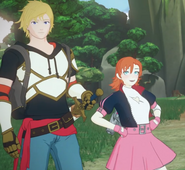