“I can't be bought, but I can be stolen with one glance. I'm worthless to one, but priceless to two. What am I? Love.”
— Edward's riddle for Oswald, which was later repeated by Cobblepot (Gotham, season 3).

Nygmobblepot is the slash ship between Oswald "The Penguin" Cobblepot and Edward "The Riddler" Nygma from the Gotham and DC Comics fandom.

Oswald walked into the GCPD looking for Jim Gordon. While there he noticed that Ed was watching him, although was trying to be subtle about it. He began to walk around the police station, Ed very noticeably following him. He stops at the front desk confronting Ed on what he wants. Instead of answering, Ed gives Oswald a riddle. Oswald becomes confused. Ed asks if Oswald likes Riddles, Oswald says no. Ed answers the riddle himself, “Nothing” being the answer. Not wanting the explanation for the riddle, Oswald asks who he is. Ed introduces himself, and says he knows who Oswald is. Oswald tells him he’s standing too close, and Ed takes a step back. He continues to annoy Oswald, who in turn tells him to go away. Ed smiles, then leaves.

While hiding the body of his girlfriend in the woods, and killing another man because he found out what Ed was doing, Ed finds Oswald fall out of a small trailer in the woods,injured from getting shot. Ed then takes him back to his apartment to help him get better. Ed tells him that he is a wanted man, and he he steps outside he will get caught. Oswald refuses his help. Ed eventually confesses his murders, and asks Oswald for advice when it comes to being a criminal. Ed starts to pay more attention to what Oswald is saying and doing, Oswald slowly gains his trust and stays with him.

When Oswald gets arrested for murdering Theo Galavan, Ed tries to contact him and asks whether there is something he can help with. Oswald tells him to visit his mother's grave and bring her lillies. Ed makes a promise to do so.

While Ed was preparing equipment for commiting crimes, Oswald decided to visit him. He happily smiles at Ed and tells him that violence and anger are not the answers. Although Ed is glad to see his friend he sceptically looks at him and drops a hint that he still has things to do. Then Oswald leaves.

After Oswald kills Theo Galavan, he becomes a candidate, once again, for mayor. While doing so, Oswald realizes he needs more supporters, and bribes the Warden to free Ed. Ed then sets up Butch Gilzean, Oswald's right hand man, by exposing his unloyalty to Oswald. Ed becomes Oswald's second in command, and best friend, with the latter falling in love. Oswald invites Ed over to dinner, to which he never showed up, due to him meeting a woman, Isabella. Ed eventually fears he may kill Isabella, as like his other girlfriend, sending Oswald to help break up with her. Isabella realizes that Oswald has feelings for him, and says she will fight for him. Ed and Isabella's relationship only strengthens, Oswald acts very bitter about the fact, and he then kills Isabella out of jealousy. Ed accuses Butch and hunts him down. Barbara Kean tells Ed about Oswald's true feelings, saying that he killed Isabella. Ed asks Oswald about becoming business accommodates, Oswald accidentally misinterpreted his proposal, confessing to Ed, who realizes, that he in fact has killed his girlfriend. Ed tries to kill Oswald many times, only to fail and for Oswald to come to the truth, he had believed he had loved Ed because he was the only one who was able to see good in him and treated him like his mother did.

In 'Pena Dura' Oswald is alone when Ed suddenly comes in and points a gun at him. He demands to know what Oswald did to him, which leaves him confused. Ed confronts him, accusing Oswald of being the one to mind control him and cause him to blow up Haven.

In 'They Did What?' Ed and Oswald team up with the GCPD to fight bane and the other men, someone from the other side of the wall throes a grenade at the GCPD, and Oswald screams "Eddie!" and it blows a part of Oswald's eye, leaving him injured. Later as the are walking down the stairs ed waits for Oswald at the end and apologizes for not doing anything about the grenade and freezing up.

Later in in the episode, they hug, holding knives to each others back, attempting to stab each other at first, but at the end of the scene, they give up and embrace the hug.

“The one whose name I wouldn’t speak. But because he has earned it, and because I need him, I’m saying it now. I need you...Riddler.”
— Oswald to Edward (season 4)

“'Edward Nygma is the monster respons- responsible for killing the innocents in Haven.' Ed, what have you done?”
— Oswald; 'Pena Dura' (s05e05)

“Perhaps, Edward... We really are meant for each other.”
— Oswald to Edward, after Ed kills Penn and calms Oswald down (season 5)

Wake Up Alone | Amy Winehouse
After Edward 'kills' Oswald, he hallucinates Cobblepot singing that song to him (Gotham, s03e15).[1]

Many shipped this pairing even before the two had met, but fics slowly became more common after the first scene together in season 1 of 'Gotham', but wasn't as popular as its rival ship Gobblepot. Shipping between the two became more popular during season 2 when they shared more screen time, and became the most popular ship in the fandom during season 3.

Fics range from future fics, about their time when Bruce Wayne becomes Batman, as well as missing scenes. Many also like the idea of them running Gotham together as a mob boss couple. Fix it fics also became popular during season 3 of 'Gotham', where the events of the season drastically changed their relationship. 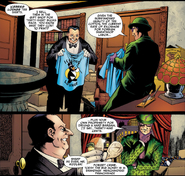 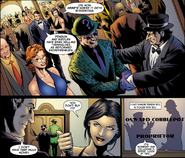