“I want to defeat Muzan, and then die. I pray my impure blood is somehow cleansed. I want to be reborn into a peaceful world without demons. And then next time, I can tell you I love you.”
— Obanai's internal dialogue to Mitsuri, Chapter 188.

ObaMitsu is the het ship between Obanai Iguro and Mitsuri Kanroji from the Demon Slayer fandom.

Obanai fell deeply in love with Mitsuri when he first met her. He's strongly protective of her and dislikes it when other people or demons call her dumb or air-headed. Obanai also becomes jealous when Tanjiro says he spent some time at Mitsuri's estate and is extra hard on him during training.

In Infinity Fortress Arc, they fight Upper Moon Four together, demonstrating impressive teamwork but still failing to take down the demon, who is killed by Muzan instead. The duo then join Tanjiro and Giyuu's battle against Muzan.

When Mitsuri gets injured, Obanai is by her side immediately and orders a nearby demon slayer to take care of her before returning to the battlefield. As he leaves, Mitsuri cries out his name and begs him to not get killed. Obanai's bandages around his mouth unravels and his disfigured mouth is revealed, but he ignores it in favor of avenging what Muzan did to Mitsuri.

After the battle against Muzan, Mitsuri finds herself wrapped in Obanai’s haori while being held by him after she lost both her arms. She states that her body doesn’t hurt anymore and that she feels as if she is going to die soon, with him saying the same. Mitsuri starts to cry saying that she doesn’t want him to die yet and that she’s sorry she wasn’t useful in the fight. Obanai tells her to not say that and they start reminiscing about the times they shared together over the years. Obanai states that he loved the way she got excited over the smallest things and that her laughter was like bells ringing. He also mentions that because of her, he was able to feel like a normal young man and that he was sure the others felt the same way. He then says that her endless cheerfulness and kindness has saved many people and that she should be proud, with him not letting anyone say otherwise. Mitsuri then starts sobbing and telling him that she loves him and that the meals she ate with him were the best she ever had because he always looked at her with his sweet eyes. She asks that if they were ever reborn as humans, if he would make her his wife. He hugs her harder with his final words being, “Yes of course... if you will agree to have me. And this time I will make you happy... and protect you so that you don’t die.”

In Chapter 205, we see Obanai and Mitsuri reincarnated and married, as they promised before they died, and they are running a restaurant together. In the volume extras it is revealed that they have five kids.

“If you and I had met under more peaceful and carefree circumstances, I wonder how well things would have gone.”
— Obanai, Chapter 188

“The kindness inside you was infinite, so you've healed many people's hearts. Hold your head high. I won't let anyone complain about you.”
— Obanai to Mitsuri, Chapter 200

“Next time I will not let you die. I will protect you for sure.”
— Obanai to Mitsuri, Chapter 200

Mitsuri – “If we ever get reborn, if we're born again as human beings, will you make me your wife?”
Obanai – “Of course. If you say you're fine with someone like me, then I will definitely make you happy.”
— Mitsuri and Obanai, Chapter 200

In the fandom, they’re shown getting food or eating often because of Mitsuri’s love of food. There is also a notably heavy dose of angst and fluff in ObaMitsu fan works, mainly because of Obanai's dark past and his facial deformity. Works often have Mitsuri comforting Obanai and being his pillar of support when his past bothers him. 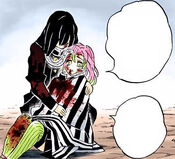 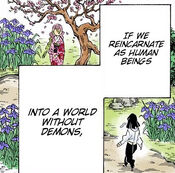