Allies; One-sided rivalry on Ochako's side

OchaMei is the femslash ship between Ochako Uraraka and Mei Hatsume from the My Hero Academia fandom.

Ochako and Mei have a tense relationship in canon. The two first meet during the sports festival in the obstacle course. Ochako is initially annoyed at Mei for being able to bring in extra gear, which then evolves into a competitive spirit as Mei races ahead of the rest of the crowd. Later on, Mei teams up with Ochako, Izuku, and Tokoyami for the middle segment of the sports festival. Ochako describes her as "that weirdo from the obstacle course."

Ochako is evidently envious of the fact that Mei primarily teamed up with them to use Izuku's popularity to her advantage. Mei's hover soles and Ochako's levitation quirk work in tandem to give their team an advantage on the field. When Izuku praises Mei's gadgets, Ochako mutters under her breath about how her quirk is the one actually making them float. The two are then happy when their team eventually succeeds. During Mei's fight with Iida Ochaco looks very unimpressed with Mei's antics during said fight.

When Izuku and Ochako go to see Mei's workshop to ask her for help upgrading their costumes, an explosion makes Mei fall all over Izuku. This makes Ochako very flustered.[1] Mei is very excited to modify Ochako's costume, but Ochako seems afraid that Mei's inventions will explode. Ochaco is also horrified when Mei almost pretzels Deku in the new suit she had made him. The two then decide to leave when she tries to get Iida to wear it.

This ship was popularized by Tumblr user ochamei, now at tumblr@epictome. Who also frequently refers to this ship as Uratsume. Ochako's jealousy towards Mei's dynamic with Izuku can be interpreted either as Ochako having feelings for Izuku or for Mei. The relationship is often characterized by Enemies to Lovers tropes, and has a niche popularity for being a femslash ship with an atypical dynamic. The ship appears to be popular partially because soft pink themes of the girls, which lead to aesthetically pleasing fanworks. 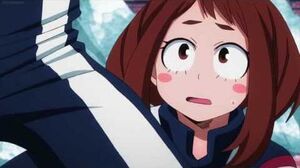 Mei - i can see the way you look at me 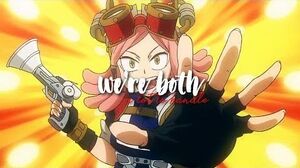 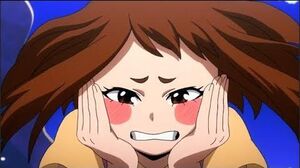 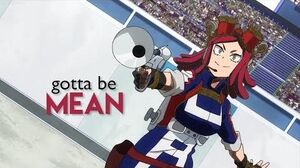