OiKage is the slash ship between Tōru Oikawa and Tobio Kageyama from the Haikyu!! fandom.

Oikawa is a 3rd year and Kageyama is a 1st year, both former teammates on the same middle school team: Kitagawa Daiichi Junior High. Both being the same position: setter, the two have been constant rivals from the start. As Oikawa was Kageyama's Senpai, he was the one who taught him a lot of techniques, like the jump serve, which Kageyama still uses to this day, making Kageyama Oikawa's 'protégé'

They met again in Episode 7 of the first season, now that Kageyama's on Karasuno High School's team. During the 3rd set, Kageyama has a feeling that Aobajohsai isn't using their official setter, and later, Oikawa shows up, after recovering from an injury. Kageyama straight up tells Karasuno that Oikawa's just as bad as him, attitude and skill-wise. Despite this, Aobajohsai High lose and in the same episode, Oikawa sets himself a goal to defeat Karasuno next time, especially Kageyama.

During the match between Karasuno and Aobajohsai, in the Inter-high tournament, Kageyama seems more nervous than any other games he's already played, and this brings him back to his old habits of King, that make him end up on the bench. When he come back to the court he's more trustful towards his teammates and that's one of the changes Oikawa notices in Kageyama. Until the end of the game, the two try to predict each other’s movements, but Seijoh takes the victory. However, they have a rematch during the Spring tournament, Season 2, Episode 20-24, and win. Before they line up, Oikawa goes to Kageyama and tells him not to get cocky, now it's 1-1. The two remain rivals, both seeing each other as someone they can't overcome, but this pushes both players to become better.

Iwaizumi – “Your student's not bad.”
Oikawa – “He's not my student!”
— Oikawa and Hajime Iwaizumi about Kageyama in "The Battle of Concepts"

Although this isn't the most popular ship for both characters, they are shipped by fans. Some stories/fanart show their relationship in middle school, and even though they're in different schools, they still have that connection. Others portray them as kings, with their respective colours from their teams. 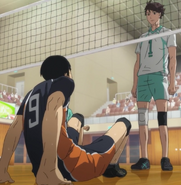 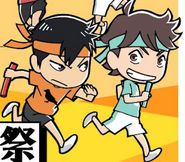