OjiKami is the slash ship between Denki Kaminari and Mashirao Mashirao from the My Hero Academia fandom.

On the Rescue Training Race on Season 2, Eijirou and the others telling each other who will win the race, both Momo and Kyoka believes that Izuku got disadvantages, Eijirou bet on Hanta, Katsuki said that Izuku is going to lose, Ochako believe that Tenya is gonna win, and Denki bets on Mashirao. On Season 3, Forest Training Camp, it shows that meanwhile Minoru is busy on looking on the wall while thinking of the girls naked, Denki splashes the water to Mashirao and then laughs together. In the manga, there's a time where they're talking about serious things while Denki is just smiling while continuosly pats Mashirao's tail, and even, even when he's being serious, he still plays with Mashirao's tail.

Denki and Mashirao's similarities are the fact that their hairs are both blond (Gold-blond and Ash-blond), their cooperativeness score and technique battle score; 5/5 & 4/5 (According from Ultra Archive) and power score; 4/6 (According from Ultra Analysis). Their differences are that meanwhile Denki's body is rather slim, Mashirao's body are muscular. And meanwhile Denki's scores on Ultra Archive are rather low, Mashirao's are pretty good, and on Ultra Analysis, meanwhile Mashirao's score are all the same (4/5), Denki's variates. With his intellect being 1/5 and the others. Mashirao have a rather noble attitude meanwhile Denki is... somewhat flirtatious towards the girls of his class (and even the ones from other classes), sometimes accompanying Minoru Mineta on his schemes and trying to pass himself off as a smooth talker. Mashirao can be described as sheepish and bashful, not very often enjoying the spotlight and being easily embarrassed, while it seems that Denki has an interest in appearing cool and trendy in order to impress people, but has a shallow understanding of how to do so properly. Because of that, he gets easily influenced by what's popular or stylish at the moment, even if it's due to villain action.

Due to Mashirao's lack of screen time, and the viewers isn't really paying attention, OjiKami is considered as one of the 'rare-pairs' in My Hero Academia. This ship's rival ships are KamiJirou and OjiToru. And meanwhile some people aren't aware of the existence of this ships, some people are aware, but they prefer OjiKami as Platonic Friendship. And while some people are like those, some people who didn't ship this ship, prefer the cargo ship; KamiOjiTail, a ship between Denki and Mashirao's tail. The fandoms often ship them in a poly-ship, ShinOjiKami and often be found in a Kamibowl fics. This ship become very popular after Season 4 got aired because they got a zoom in of Denki patting Mashirao's tail but still got defeated by the popularity of KamiJirou and OjiToru. 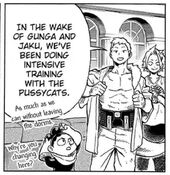 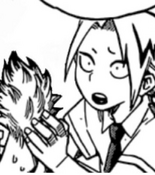 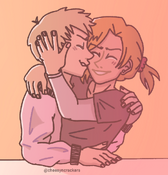 By @charliethe2nd
Community content is available under CC-BY-SA unless otherwise noted.
Advertisement