OjiShoji is the slash ship between Mashirao Ojiro and Mezo Shoji from the My Hero Academia fandom.

Mezo and Mashirao are not shown to interact all too commonly, partially due to their stronger relations, and greater number of screen-time/importance in relation with/to Fumikage and Toru respectively. Additionally, the two are both background characters in the story, both with rather minor roles, and no truly heavy/meaningful development to their characters, due to the plot’s evidently main center around Izuku. However, both characters have had their notable scenes in the series, many of which are shared, due to their sharing of (background) status in the story.

Mashirao and Mezo are set against one another for their Battle Trials. Mashirao is partnered with Toru for the ‘villain’ team, Team I, while Mezo is assigned to Shoto for Team B, the hero team. However, the two do not get a chance to pursue combat with one another, as Shoto had Mezo step out of the battle grounds, as to allow him to set off a large stream of ice to capture Mashirao and Toru without harming Mezo. The two are not shown to interact afterwards, even after regrouping with their classmates post-fight, as the scene takes a strong center towards Shoto rather than the two of them.

Both Mezo and Mashirao have obvious physical mutations, given their quirks (Mezo has an elongated face, and almost bat-like appendages in place of humanoid arms; Mashirao has a kangaroo/monkey-like, blonde-tipped tail atop his tailbone), neither of which are considered to be conventionally attractive, or desirable by most, even by quirk standards. Additionally, sprouting from these mutations, both characters have been shown to express a similar insecurity at times, especially due to the lack of subjective ‘flashiness’ they have in comparison to those like Shoto or Katsuki. However, small scenes have shown either working through this insecurity and learning to take better pride in themselves, in a similar fashion to a more major character, Eijiro’s character arc.

Mashirao and Mezo are teamed for their Joint Battle alongside Shoto and Tenya, and against Juzo, Sen, Pony, and Tetsutetsu. However, like their Battle Trial, which they also fought together, albeit on opposing teams, two are not showcased all too heavily due to Shoto, whose battle again Tetsutetsu stole the show. This does not completely steal their screen-time, however, and both boys are shown with new combat skills, unseen before. The fight ends in a 3-3 draw, due to the battle’s time limit running out. The two also seem to be close off screen as well.

Due to the more popular ships of TokoShoji and OjiToru for Mezo and Mashirao respectively. OjiShoji is not very popular, even in comparison to that of (the popularity of) other rare-pairs, especially when both character’s lack of screen-time is brought to light. However, many fans of MHA/BNHA’s background characters, who feel that they deserve more love and attention in the series enjoy the pairing. As well as other background ships in the show too. It has a small amount of popularity on tumblr. 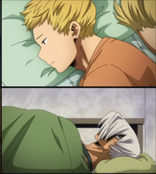