• Amicable Exes - for a time, till they get back together.
• Babies Ever After
• Bad Date - It didn't start out that way, but their first date ends up going pretty bad.
• Battle Couple - Played with.
• The Big Damn Kiss
• Brooding Boy, Gentle Girl
• Everyone Can See It
• Happily Married - For a bit...the Monitor messed that up.
• It's Not You, It's My Enemies
• Married to the Job
• Office Romance
• Official Couple
• Relationship-Salvaging Disaster
• Returning The Wedding Ring
• Working with the Ex
• Zip Me Up

Olicity is the het ship between Oliver and Felicity from the Arrow fandom.

To begin with, Oliver and Felicity's relationship consisted of minimal conversations and Felicity's hacking skills were used to assist Oliver on various missions as "The Hood", although Felicity didn't find out his secret identity until later. Oliver found her amusing on several occasions; most notably their first meeting. They first met in I.T. Department of Queen Consolidated. Upon introducing himself, Felicity accidentally mentioned his father's death, backtracking apologetically and ending up babbling at him. This amused Oliver. To her relief, he ignored her ramblings and gave her a bullet-ridden laptop, claiming that he'd spilled a latte on it, though she clearly did not believe Oliver's cover-story.

Felicity's tech assistance aided many of Oliver and Diggle's cases and Oliver seems less troubled by putting his faith in her than many other people he comes across. When Moira unwittingly shoots her son, Oliver asks Felicity for help, risking exposure of his secret identity. Assisting Diggle, Felicity helps save Oliver's life and a new era begins of the team becoming a trio. Although Felicity has some moral quibbles with Oliver's methods, she chooses to stay with the team and help them fight for justice in Star City. In 6x10 they finally get married and raise William happily as a family.

Oliver heads to Queen Consolidated's tech department and finds a woman named Felicity Smoak. After some awkward back and forth, he tells her that he was having trouble with his computer, and hands it over. He says he spilled a latte on it, but she says it's probably the bullet holes. He asks her to salvage anything she can, and she gives a nod to confirm that she'll try.

After some time, she's able to get the information pulled up from it, and shows him several blue prints. When he doesn't know what some of the stuff on it is, she tells him that she didn't want to get involved in whatever family drama was going on, confusing Oliver. She explains that Walter is trying to buy the company that the blue prints show the building of, and the laptop is from one of it's employees.

William Clayton is the son of Oliver Queen and Samantha Clayton. When Samantha is killed during the season five finale William moves in with Oliver. In season 6 episode 3 Oliver asks Felicity to tutor William in Maths before a big test. Felicity tutors William, as a result, William gets an A in his test. This helps William and Oliver bond and the two become closer. After Oliver is sent to prison after the season 6 finale, William and Felicity go into Argus protective custody. In season 7 episode 3 Felicity says during a conversation with Samandra Watson "I had to send my son away". William chooses to live with his grandparents in Central City during season 7 episode 13, as a result, William never finds out about his little sister in the original timeline until 2040. In the new time William grows up with Felicity and Mia, it can be assumed from the Green Arrow and the Canaries episode that William is running Smoak Tech after Felicity goes to the paradise dimension to be with Oliver. In the year 2040, William becomes team arrow's Overwatch.

In season 7 episode 13 Felicity discovers she is pregnant. They have a daughter named Mia Smoak, Mia has her mother's last name in the original timeline to keep her safe. Mia grows up isolation with just her mother after her father's death. Mia's existence remains a secret until 2040 when William discovers he has a younger sister. In the new timeline created after crisis on infinite earths, Mia is known as Mia Queen. Mia grows up with her brother, mentioning in the Green Arrow and the Canaries pilot that when she was 5 years old she drew all over her brother's walls. In 2040 Mia regains her memories of her previous life leading her to take over her father's mantle and becomes the Green Arrow.

“I love her so much”
— Oliver Queen about Felicity

Darkness On The Edge Of Town 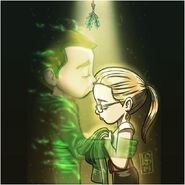 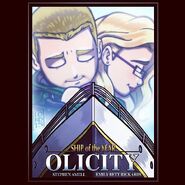 Oliver and Felicity (first meet).03 Part 1 The First Meeting, "My coffee shop is in a bad neighborhood"

Oliver and Felicity 1x12 .I said not noticed, right?"

Oliver and Felicity GET MARRIED