Olivarry is the slash ship between Barry and Oliver from the Arrowverse fandom.

Barry and Oliver meet in November 2013 when Barry visits Starling City to follow up on an unusual occurrence. Barry instantly connects with Felicity, prompting Oliver's jealousy and repeated attempts at undermining Barry.[2] Add to it Oliver's hesitancy to trust and he lashes out when Barry helps save his life. Oliver discovers that Barry isn't actually in Starling City on assignment, but has a softer disposition towards Barry having lied about his reason for being there once Barry tells them the story of his mother. In spite of Oliver's jealousy of Barry and Felicity's blossoming romance, he and Barry part on good terms with Barry gifting Oliver with his very first vigilante mask.[3]

After waking from the coma and falling out with his family, overwhelmed by receiving his powers, Barry calls Oliver[4] and runs to Starling City to see him. Oliver imparts his trust in Barry's ability to be a more noble hero than Oliver thinks he himself could ever be, which helps Barry believe in himself and start on his path as a superhero.[5] They see each other again when Oliver, Diggle and Felicity come to Central City to elicit Team Flash's help with Digger Harkness aka Captain Boomerang. Oliver is a bit grumpy and unimpressed with Barry's improvisation heroics and offers to train him, which leads to Oliver shooting Barry with two arrows in the back!

Barry's exposed to Rainbow Raider's powers unbeknownst to everyone and becomes increasingly filled with rage, lashing out at Oliver during training. Team Flash soon figure out that Barry was exposed and Oliver has to fight Barry in the streets of Central City to subdue him long enough for the Team to administer the remedy. Oliver manages to do so and Barry returns to his normal self. Before Team Arrow leave for Star City, Oliver and Barry have a heart-to-heart about their superhero lives at Jitters, where Barry apologises for his actions while under the influence.[1]

Following this, Barry and his team — Caitlin and Cisco — accompany Oliver, Diggle and Felicity to Star City to help them stop Captain Boomerang. Barry and Oliver work together and Barry is aghast at Oliver's methods; torturing criminals for information and his ruthlessness. Oliver is frustrated with Barry, deeming Team Flash's methods a way of distancing themselves from the stark realities of crime and supernatural threats. Barry insists that Oliver doesn't have to be swallowed by darkness to be the hero he thinks Barry can be, and Oliver notes that maybe Barry could be right, while Barry doesn't miss Oliver's point about the serious responsibility of being a hero. This marks the beginning of their partnership, rather than the slightly mentorshipesque dynamic Oliver had hitherto established, which also happens to mark a year from when they first met.[6]

Barry calls Oliver for help in Spring 2015 when faced with taking down Reverse-Flash, after learning "Wells'" true identity as Eobard Thawne. With help from both Oliver and Ronnie Raymond/Professor Stein as Firestorm, they manage to capture Thawne. Barry is grateful and Oliver asks if he can return the favour in the near future, which Barry agrees to.[7] Oliver calls in the favour while plotting to battle R'as al Ghul as his team is being culled in the basement of the League of Assassins headquarters in Nanda Parbat. Barry arrives in time to save them all and has to hurry back to Central City to deal with Eobard Thawne.[8]

In the Autumn, Barry runs to Star City and saves Oliver, Thea and Diggle from Damien Darhk, after which Oliver seems slightly irritated at being 'upstaged'. Barry explains that they've encountered a magical opponent in Central City and Barry needs Oliver's expertise in the area to defeat him, which Oliver agrees to provide. Barry brings Cisco and Kendra to Star City and Team Arrow's new lair.[9]

Barry – “I just noticed, no sleeves. Don't you get cold?”
Oliver – “I spent the better part of five years on an island in the North China Sea. I don't get cold, Barry”
— Legends of Yesterday[10]

Oliver – “Since when is that a thing?”
Barry – “Huh, about eight months. Maybe if you save Star City you might get one too”
— The Flash Drink[10]

〉Oliver is an interesting guy, um, unbelievably damaged. I hope he won't mind me saying that. I don't mean well, all I meant by that was just that he's lived through a lot of darkness. And all he really cares about is trying to make sure nobody else has to go through what he's gone through. No, no, no. I didn't know he was the Green Arrow until he turned himself in. I mean, and, you know. Whoa, obviously, big surprise. I mean, you think you know a guy.〈
—Barry; Emerald Archer

Oliver – “Do you trust me?”
Barry – “With every cell in my body”
— Crisis on Infinite Earths Part 4 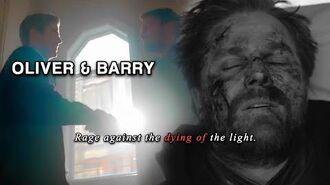 Oliver & Barry “Rage against the dying of the light.” +Crisis 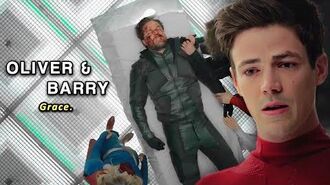 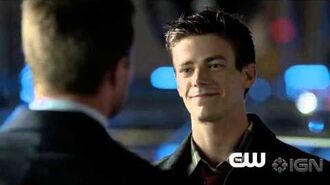 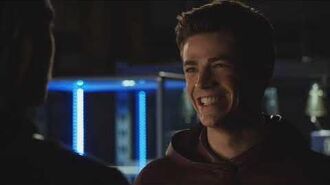 Olivarry are being an old married couple for almost 4 mintues 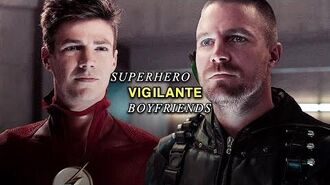 Laugh for 3 minutes and 6 seconds straight 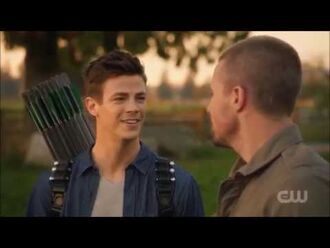 Barry & Oliver acting like a married couple in Elseworlds