Former Companions/Classmates; both are dead

Ougoku is the slash ship between Gonta Gokuhara and Kokichi Oma from the Danganronpa fandom.

In the begining Kokichi considers Gonta a typical dumb muscle and planned to use him as one of his minions. He uses no honorifics towards Gonta when talking to him in the Japanese version although not entirely to single out Gonta disrespectfully as he uses over familiar unwarrented honorfics with the other characters.

In Chapter 2, Kokichi tricks Gonta to work for him by pretending to be a fellow bug lover. In order to get everyone's Kubs Pad, Kokichi used Gonta to bring the students into his Research Lab. He lied that the others hated bugs and they should all have relaxing time with the insects and appreciate them. However, K1-B0 soon exposes Kokichi's lie, resulting to Gonta subjecting Kokichi to stay, telling him that they shall spend the whole night petting bugs. The other students escape the scene quickly, hearing the sound of "buzzing and Kokichi's screams" from the lab. After the incident Gonta decides to stay close to him to keep an eye on him.

During free time events of Chapter 2, if you attempt to hang out with either Kokichi or Gonta they will both state little things about being busy with each other but a little time with Shuichi would be okay. Kokichi is notably upset the second time you choose to have free time with Gonta.

In the second Class Trial, Gonta solves how the murder was executed. Kokichi compliments him and says "You're finally getting use to the trials huh Gonta?"

In Chapter 4, Kokichi seemingly manipulated Gonta into killing Miu for him, because Miu had made it so that Kokichi couldn't harm her. However, it is also indicated that they both agreed that mercy killing would be the best action, and that Gonta's decision was ultimately his own. During the class trial, Gonta felt horrible and cried, having no memories of what happened due to an avatar error. Kokichi got increasingly frustrated when Gonta was unable to argue back, and seemed genuine when he stated that it hurts his heart to persecute Gonta so much.

After hearing everything that happened, Gonta still chose to forgive Kokichi and begs the others not to blame him anymore, which touches Kokichi a lot. Kokichi genuinely starts feeling bad, Kokichi said he should be punished too, but Gonta disagreed and just told him to promise him that everyone will forgive each other and be friends. Kokichi is speechless for a second, but in seriousness gives Gonta his word. As the execution grows closer, Kokichi seems to genuinely break down and cry and shouts Gonta's name, saying he doesn't want this and telling Gonta not to go.

After Gonta is executed and kokichi is told to explain himself hes hesitates then dramatically over-corrects his show of genuine emotion by beginning to act exaggeratedly "evil" and claiming that he didn't care about Gonta and that he was just fake crying.

In the bonus mode Ultimate Talent Development Plan, Kokichi often tricks Gonta with his lies, but Gonta considers him a friend after the three years they spent together. However, Kokichi tells Gonta that they won't see each other anymore after graduating due to them being a gentleman and an evil supreme leader. Kokichi tells Gonta that he won't be tricked by someone like him anymore. He claims he is so sad he barely eats and he cries himself to sleep at night, which makes Gonta worried, though Kokichi soon claims it's just a lie. Interestingly, when Gonta is genuinely saddened because he won't see Kokichi anymore, Kokichi reacts with slight anger and believes Gonta is trying to trick him back, showing that he believes other people can't genuinely care about him, not even someone as kind as Gonta. Nevertheless, Kokichi bids Gonta his farewell, claiming he isn't a gentleman like Gonta. Gonta feels even more sad as a result, and says he wishes it was a lie.

“You're a true gentleman!? More like a true nincompoop!”
— Kokichi screaming at Gonta during the fourth Class Trial.

The ship sailed as a result of the two often interacting together and Gonta being one of very few students who are willing to be nice towards Kokichi. However, a lot of fans do have a dislike for the ship because of the events of Insect Greet and Meet incident in Chapter 2, and even more so because of Chapter 4. It is a controversial ship among the fandom for Kokichi's general toxic behavior as a character and the over-infantlization of Gonta, as most would rather ship him with someone as nice as him. Though not as popular as other ships, this ship has gained more fans later in the fandom and their often complicated and sensitive relationship has been explored more than face value.

Whether Kokichi truly cared about Gonta and only pretended to be fake crying over his death to match his upcoming lie of being the mastermind or whether he indeed didn't care about him is a wildly debated topic. His confessions to Kaito as he was dying in the hydraulic press in Chapter 5 about hating the killing game proved the former for a lot of fans. Regardless, this shouldn't negate that he had a good relationship with someone he betrayed.

Due to Miu Iruma being shipped with both of them, they are sometimes shipped in a polyship with her. Certain polyship variations may also include K1-B0. 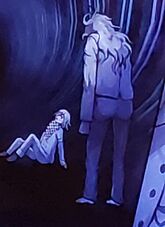 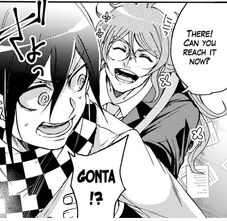 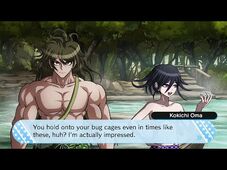