View source
watch 01:55
Cobra Kai Season 4 - The Loop
Do you like this video?
Play Sound
WOAH! THAT'S ONE SMALL SHIP!
• THIS ARTICLE IS A STUB. YOU CAN HELP BY EXPANDING IT •
Stub pages are deleted after 4 months and if not filled out enough, Ouma x Grape Panta will be deleted
3/21/22

Ouma × Grape Panta is the cargo ship between Kokichi Oma and a Grape Panta from the Danganronpa fandom.

Kokichi has never drunk or mentioned grape panta in canon. However, he is holding it in his CG sprite used in the opening of New Danganronpa V3: Killing Harmony, which became a meme.

During his freetime events with Shuichi in Dangan Salmon Team, he states that he is unable to taste food or water. It has not been confirmed whether this is a lie or the truth, though. However, it was never stated that it was a lie. If Kokichi is really unable to taste food or drinks, then the things he likes to drink/eat will heavily rely on texture, smell and appearance of what he consumes. As Grape Panta is a type of purple color, it could be that he likes it as it is his presumably favourite color.

The ship and a meme emerged as a result of Kokichi's CG sprite used in the game's opening where he's holding a bottle of grape panta. Being another cargo ship that emerged from a meme makes it similar to Kamakura and boats, Korekiyo and a seesaw, Komaeda and bagels, or Hinata and orange juice. It may also be called Surgery on a Grape, a reference the popular meme as of December 1st.

In terms of fandom content, art will typically have Kokichi drinking grape panta. While it is usually drawn art, some have edited in-game sprites and art for either fandom videos or memes. Fan-made fiction has also been made. Stories of the cargo ship are typically crackfics.

Cosplayers will also have themselves dressed up as Kokichi with grape panta's real life counterpart, Fanta, as a prop. During photoshoots, fans may copy Kokichi's CG sprite or have the character hoard multiple bottles of the drink. For accuracy, some may even switch the labels to read as “Panta” instead. 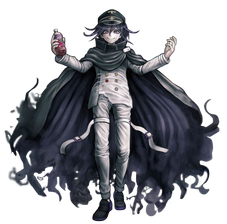