Friends/Classmates/Kokichi's one-sided crush; both are dead

Oumami is the slash ship between Rantaro Amami and Kokichi Oma from the Danganronpa fandom.

Like rest of the group, Rantaro can be a little annoyed with Kokichi and his behavior. Though both of them aren't shown to have to many interactions due to Rantaro's early demise, when witnessing Rantaro's dead body, Kokichi called him "My Dearest Rantaro" or "My beloved Amami-chan" in the original Japanese and started crying. However his reaction changed very quickly and so it's hard to tell which of his reactions was fake and which wasn't.

When entering Kokichi's room, it is seen that he has a statue of Rantaro in his dorm room that was made by Angie Yonaga. Kokichi decided to keep it over Ryoma, Kirumi, and even Kaede's (whom he thought was very interesting), implying he liked and found Rantaro more interesting than them.

During one of the anthology comics, Rantaro seems to treat Kokichi like a little brother. When the others tried to catch Kokichi, they used Rantaro in order to use his 'Amami trap' by standing in place to catch him with his arms and when Kokichi asks him to let him go whilst calling him "big bro", Rantaro softens and lets him go just for that moment. He treats Kokichi as a little brother in the other stories as well, being kind and patient towards him as if he were a small kid. Although he finds Kokichi a bit annoying and is probably someone he would never get used to.

Both are included in 3 Promotional arts of just the 2 of them.

One of the reasons that made some fans ship Rantaro and Kokichi is the latter having Angie's wax figure of Rantaro in his room. Another reason came from an official art (the page's info-box picture) showing the two together in a rather suggestive pose. Others also believe due to Rantaro's laidback personality he's the only one in the group who is able to handle his behavior.

Another key factor in the two being shipped together was that both gave the Rival character vibes to a lot of fans, with Kokichi being obsessed with lies, one of the game's main themes, and indeed going on to become the Rival; and Rantaro's design and certain poses giving some fans Nagito Komaeda vibes (who himself was one of previous rivals). As a result of theories about both being the troublesome duo upon the game's release, the ship quickly sailed.

The ship is the third most written one for Kokichi on AO3, and the second for Rantaro. In a similar manner, it usually is the third most popular shipping option in the fandom in general for both characters included, usually only losing in popularity to Saiouma or Oumota from Kokichi's ships, and Amamatsu or Amasai from Rantaro's ships. 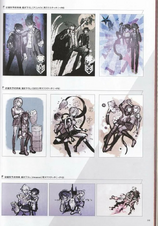