Never Interacted; both are dead

• Birds of a Feather
• Opposites Attract

Oumanami is the het ship between Kokichi Oma and Chiaki Nanami from the Danganronpa fandom.

Chiaki and Kokichi have never interacted, due to being from different games, though they have some interactions in Danganronpa S: Ultimate Summer Camp. In one, they talk to Monokuma about a ghostly figure spotted near the old hotel. Chiaki reasons that Monokuma is unlikely to be involved in the figure's appearance, but Kokichi continues to antagonize him. Chiaki chides the two troublemakers, telling them that they should go to bed, to which they both agree. In another, Kokichi offers to sponsor Chiaki's streaming channel in order to sow chaos, but Chiaki declines, saying that she believes the gaming community needs more positivity and unity. At the campfire, Kokichi offers Chiaki advice on telling good scary stories. In another campfire event, Chiaki makes an attempt to express her emotions more clearly while listening to one of his scary stories

Chiaki and Kokichi almost have nothing in common. While Chiaki is a sweet and nice person, Kokichi is mostly a liar and manipulator, though his real character isn't really known. However, they both have a love for video games, with Chiaki being the Ultimate Gamer and having something like an obsession over video games, and one of the few things that are revealed about Kokichi being that he played video games for his whole life and loves them. Chiaki and Kokichi also are sometimes childish and are very excited when seeing new things. Chiaki and Kokichi are also both considered to be smart.

Both Chiaki and Kokichi have sprites that are very similar to each other, causing some people to compare them.

This ship is considered a rare-pair among the Danganronpa fandom due to their lack of interaction in the canon story or the bonus material. Nonetheless, some people still like to imagine what would have happened if both characters would have met. There is quite a bit of fanart for the ship despite it being such a minor ship. However, both characters have more popular ships, Hinanami, Saiouma and Oumatsu, with their respective protagonists, Hajime Hinata, Shuichi Saihara and Kaede Akamatsu. On AO3, the ship currently only has 6+ works. 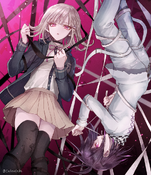 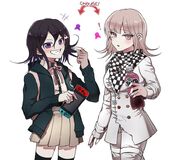