Rivals, Kokichi is dead
Friends, One-sided crush on Kokichi’s side (Free Time Events/Love Across the Universe)

Oumasai is the slash ship between Kokichi Ouma and Shuichi Saihara from the Danganronpa fandom.

Kokichi appears to be amused by and in some way fond of Shuichi, having stated that the other boy seems "decently not boring", which is a very rare and notable compliment coming from him. He regularly calls him his "beloved Saihara-chan" in the Japanese version, and occasionally calls him "mister detective" or "mister Ultimate Detective". He also once called Shuichi "Shumai", as a parody to Kaito's "Maki Roll" nickname for Maki. Kokichi enjoys his company, finding him one of the most interesting person in the group and praises him often. He has also more than once mentioned that he is "constantly thinking about" Shuichi, and claims that he is his favorite whom he loves the most. On his whiteboard, it's shown that Kokichi has a more positive, though slightly unclear, impression of Shuichi, considering him "trustworthy?". Considering his hatred of boredom, it seems Kokichi is intrigued by Shuichi's development. During the trials, he often does not reveal Shuichi's lies even though he notices them. He occasionally made fun of Shuichi's nervous personality, calling his hat "emo hat" and calling him and Tsumugi a "plain pair".

During Chapter 4, when everyone is inside Neo World Program, Kokichi claims he would cry if something happened to Shuichi with a worried expression. When they're alone, he tries to offer his support for Shuichi, saying he wants to use him but also be useful to Shuichi as well. He attempts to separate Shuichi and Kaito, telling Shuichi that he should be his friend instead. Kokichi says he can help Shuichi save everyone, but Shuichi doesn't trust him and leaves without saying a word. Kokichi then mutters to himself about being dumped and rejected by Shuichi, but he says he won't give up that easily. Darkly, he states that if he grows to like someone, he makes them notice him even if it means choking them. In the original Japanese, the phrasing he used, translated as to “like someone”, is nearly always used in a romantic context and can be more accurately translated as calling Shuichi “the person I fell in love with.” The same phrasing is used by Maki Harukawa to describe her feelings for Kaito Momota, which are canonically romantic in nature.

In the fourth Class Trial, Kokichi is surprised to see Shuichi had lied to him. He claims he is frustrated and then decides to bother with his reasoning. When Shuichi calls him "lame" and says he is meant to be the kind of person who doesn't have anyone for him, Kokichi's boastful attitude changes and he seems genuinely upset. He then says the whole thing is getting boring and he doesn't care anymore.

While he enjoys to mess with him, Kokichi appears to feel some care for Shuichi and seems to be unwilling to actually harm him. Throughout his Free Time Events, Kokichi tries to "kill" Shuichi and involves him in many of his selfishness and pranks, though he also seems to make sure Shuichi won't be harmed and seems to just mess with him with words. He also invites him to a tea party and suggests Shuichi could join his organization, so he doesn't have to die. In the last event, Kokichi hurts himself by playing the Knife Game and Shuichi takes care of him in worry. Kokichi is pleased by this and tells Shuichi he won, confusing the detective who answers that he wasn't even playing. Kokichi tells him that games can be won without playing them, foreshadowing the end of the killing game. He then claims he never had an intention to actually kill him. Since he has made Shuichi think about him constantly, he claims he has already "killed" him by "stealing his heart".

In Kokichi's Love Hotel scene, his fantasy involves him being a legendary thief who's been captured by his archenemy, the detective Shuichi Saihara, with the scene including lots of sexual tension. It's revealed that Kokichi let himself to be caught on purpose and actually wishes to get tied up and "interrogated" roughly, but Shuichi does not want to hurt him and is confused by the situation. This disappoints Kokichi a bit and he states he wouldn't mind whatever Shuichi would do to him. Shuichi continues to act very hesitant and Kokichi says it does not matter how Shuichi feels, though he soon states he was lying about that. Kokichi asks if Shuichi is mad because he feels like Kokichi is playing with his heart and he says his head is always filled with thoughts of Shuichi. He tries to trick Shuichi by claiming that they are surrounded by Kokichi's subordinates, but Shuichi can tell he is lying. Since Shuichi does not make a move, Kokichi says he wants to play with him more and pushes him on the bed. However, he suddenly runs off, which confuses Shuichi even more and he shouts after Kokichi. Right before leaving the room, Kokichi says he wishes to have more fun games with the detective next time they meet. This is the only fantasy sequence in which Shuichi has his true role as the detective, which might hint that Kokichi is indeed attracted to him.

During the bonus mode, Shuichi realizes that he cannot change Kokichi's lying which is a significant part of him and instead should try to understand him and his lies. In his Harmonious Heart scene, Kokichi says “maybe I was born into this world just to meet you”, a reference to the infamous line spoken by Kaworu Nagisa from Evangelion, a character with a same-sex crush on the protagonist. He also at one points suggests they may have been lovers in a past life.

The ship sailed as a typical Foe Yay ship between the protagonist and his rival. Their interactions throughout Chapter 4, where Kokichi is determined to team up with Shuichi against the latter's best friend, Kaito, have also helped to fuel the ship even further. So did Kokichi being the investigation partner for Shuichi in this chapter. The fact that both characters are implied to be gay (Kokichi) or bisexual (Shuichi) also helped make it a fan favourite. It has overshadowed many other Shuichi ships. In some parts of the fandom, it has even surpassed the popularity of Shuichi's heavily teased ship with Kaede Akamatsu.

On A03, Oumasai has the most written fanfictions about the ship. 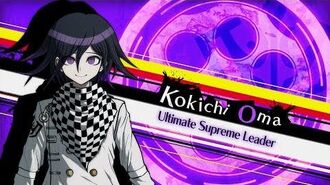 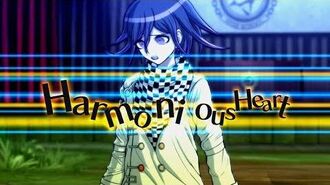 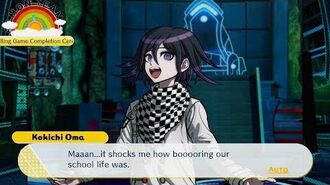 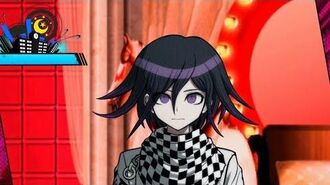 Retrieved from "https://shipping.fandom.com/wiki/Oumasai?oldid=214027"
Community content is available under CC-BY-SA unless otherwise noted.