Oumatsu is the het ship between Kaede Akamatsu and Kokichi Ouma from the Danganronpa fandom.

Their first Free Time Event starts by Kokichi saying he doesn't want to die and that Kaede can stay by his side for a while. The rest of the Free Time Event is spent by Kaede trying to prevent Kokichi from trying to do anything 'stupid'. At the end, Kokichi asks why Kaede approached him in the first place, to which Kaede replies that she just wanted to do so, and was fine if Kokichi didn't want to spend his free time with her. He then says, he'd never turn down an invitation from her, but then adds that it was a lie. After lying about their first encounter, he then apologises.

In their second Freetime Event, Kokichi accuses Kaede of wanting to kill him, after which, if the player chooses to spend time with Kokichi, Kaede will have to chase after him, which amuses him. Afterwards, Kokichi asks Kaede for a favour, which is Kaede working for him as an agent in his secret organisation, as he believes Kaede will go on to 'represent Japan as a pianist' and thus she could go abroad without any suspicion, and meet as many powerful figures as she likes. He then tells her "Join my organisation, and together we'll do as we please to all the stupid plebs to the world. Let's sit on top of the world and look down on everyone else... And if we want to watch the world burn? We'll light the whole thing up!" In response, Kaede questions the existence of his secret organisation, to which he retells Kaede that he is a liar. At the end of the event, Kokichi says "But y'know I'm only saying this because I care about you, right Kaede?' You can keep thinking like that, but don't come back crying to me when things don't go your way." Kaede then refuses to he an agent of his secret organisation, which it ends with an unaffected Kokichi.

After Kaede is found guilty for the murder of Rantaro Amami, Kokichi says that Kaede definitely wasn't boring.

The ship sailed with Kaede being the first protagonist of Danganronpa V3 and Kokichi coming off as a "rival character", being a compulsive liar thus representing one side of the "Truth vs. Lies" theme. The ship was fueled even more because of how Kokichi said that he cared about Kaede, and mentioned her ruling the world by his side.

Although initially popular for being another example of Danganronpa's ships between a protagonist and their rival, the ship's popularity faded with Shuichi Saihara taking over as the main protagonist of the game, thus giving Oumasai the same dynamics, which were developed more than the former's due to more screen time, resulting in the bigger popularity of the latter. Aside from the aforementioned Oumasai, Oumatsu is also a less popular rivaling ship of Kaede's other main ships: Saimatsu and Amamatsu. 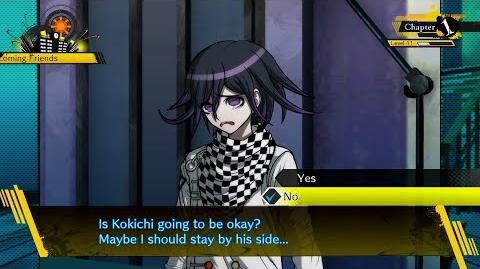 Retrieved from "https://shipping.fandom.com/wiki/Oumatsu?oldid=219883"
Community content is available under CC-BY-SA unless otherwise noted.