Oumeno is the het ship between Kokichi Oma and Himiko Yumeno from the Danganronpa fandom.

Before the second trial in Chapter 2 Tenko assumed that Kokichi might've had a crush on Himiko as she believed the rumor that if a boy teases/bullies a girl it means they might have feelings for them, Kokichi responds to this surprised and questions Tenko how did she know and they should both talk about it later but it's unknown if he was joking and if they actually talked.

In chapter three, Himiko is grieving over the deaths of her friends, Angie Yonaga and Tenko Chabashira. However, she refuses to be open with her emotions and instead bottles them all in. This is when Kokichi can tell she is lying to herself, and calls her out on it. He tells her its bad to lie about your emotions and she should be true to herself. Because of this, Himiko allows herself to cry over her deceased friends and in later chapters of the game, thanks to Kokichi and Tenko's advice, Himiko is a stronger person and is more expressive with her emotions.

In chapter five's trial, Kokichi has passed away, but before he died he left Kaito Momota notes, telling him how to act around the rest of the characters. Kaito following the notes will tell at some point that he likes Himiko, causing her to blush. However, Kaito also admits that he has ad-libbed parts of the script, but even though it is highly likely that this was part of the script, it is unknown if this was truly part of the original or if he just added it in. Furthermore, Kokichi is known to tell people he likes/loves them as a joke, and given he is dead at this point, it is impossible to know if he was being serious.

Both in the demo and in chapter five Himiko offers to strip Kokichi “butt naked,” the first time to make sure he wasn’t suspicious and the second time just to see him “cover his crotch”. The fact she randomly brings this up on her own suggests she may think about him often in a romantic manner. During chapter five when Kokichi took Kaito to the hangar and the remaining characters are thinking of a plan to get Kaito back, Maki Harukawa says she will kill Kokichi. Both Shuichi Saihara and Himiko tell her not to do this, Himiko going as far as saying they will be upset if they kill him. This suggests Himiko doesn’t want Kokichi to be hurt.

In Himiko and Kokichi's respective relationship charts, Kokichi comments that Himiko is an "extremely ugly girl", while Himiko comments that Kokichi should go to hell.

Despite not being stated directly during the game, it is highly implied that Himiko could be bottling up her true emotions for Kokichi, despite their complex relationship shown in-game. For example, Himiko becomes flustered when Kaito, disguised as Kokichi, says that he likes Himiko after she claims to hate him. This emotional reaction may be one of the key contributors for the popularity of the ship, although Himiko could have just been caught off guard to have had that reaction. The ship is still highly debated as canon or non-canon throughout the Danganronpa fandom.

The ship sailed mostly as a result of a line during the fifth Class Trial when Kaito, pretending to be Kokichi in an Exisal, tells Himiko that he likes her using the script Kokichi gave him after she tells him she doesn't even like him. Himiko easily buys this and later tells him not to bully the person he likes, referring to herself. It is unclear whether Kokichi was lying when he wrote this or not. Some also ship it because of the aesthetic between the two, with the two being short and wearing capes. Although Oumeno may lack in fanfictions there is a lot of fan art, edits and fan videos depicting the two.

The fandom has had mixed reactions to the ship, mainly due to some believing that Kokichi's actions towards Himiko are unhealthy, or even abusive, mostly because Kokichi playing with Himiko's feelings and as well calling her ugly, etc. However, some people also see the problem on Himiko's side, since she really begins to hate Kokichi during chapter 5 and states that she doesn't trusts him. In her relationship chart, she even goes as far as saying to him that he should go to hell, which is rare for Himiko since she usually doesn't uses curse words. Despite this, it's still a popular yet controversial ship for them both. 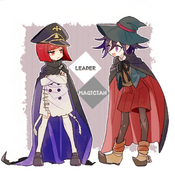