Former Enemies/Companions; both are dead

Oumota is the slash ship between Kokichi Oma and Kaito Momota from the Danganronpa fandom.

Kokichi and Kaito have a violent relationship, marked by constant antagonism and disagreements, since Kokichi acts like a stereotypical villainous character while Kaito is the stereotypical hero type. Neither understands the other's way of thinkingーKokichi believes Kaito is gullible and dumb for having such blind faith in others with no logic, while Kaito hates Kokichi's lies and more cynical way of thinking. However, Kokichi also understands that they simply have different views due to coming from different backgrounds and has stated that he doesn't wish for Kaito to change because his current attitude makes things interesting, showing that he does appreciate Kaito in a way. Kaito doesn't seem to have this sort of appreciation for Kokichi, only finding his views extremely frustrating and always refusing to believe Kokichi's words despite his claims of believing in everyone, as he believes that Kokichi is never going to change his ways.

Despite his best attempts to stay calm, Kaito sometimes ended up lashing out at Kokichi when the latter infuriated him, even punching him once. Kaito often made threats toward Kokichi, and in turn, Kokichi would taunt or anger him more but for the sake of trying to overpower him and scare him. Throughout the game, Kokichi mocks Kaito for his foolishness, going as far as to call him an idiot several times in the Chapter 2 trial for blindly believing in Maki Harukawa. Kaito does get pissed off at the insults, shouting at him and the others to stop calling him an idiot. Often, the two's fighting can turn into childish arguments. However, Kokichi occasionally appears genuinely scared of Kaito's violence and sometimes runs away and hides from him for quite a while.

However, despite their extremely rocky relationship, it's been shown that Kaito can be more understanding of Kokichi and tries to think about the reasoning behind Kokichi's actions when he is calmed down. He has talked to Shuichi Saihara about it more than once, such as when he recognized the way he lashed out at the beginning of Chapter 4 was most likely due to the fact he was frustrated with all the murder and tense situations they've been put through, and Kaito also appeared to understand Kokichi's motive in Chapter 2 though he was unsure about it. Notably, Kaito realizes how Kokichi's behavior changes during Chapter 4, appearing much more malicious than before, and he wonders what happened to him. Furthermore, Kaito appears protective of Kokichi whenever Maki attempts to strangle him, and clearly doesn't want him dead despite their issues.

During the Chapter 3 trial, Kokichi goes on about how it's impossible to trust anyone to their fullest, so he doesn't see the point of trusting anyone at all. He goes as far as to say Tenko lied to Himiko about her intentions during the ritual, accusing the victim of committing suicide underneath the cage to get them all killed. For this, Kaito calls Kokichi "such a naive dude", telling him that everyone has a secret to keep, and he shouldn't get so paranoid over someone's true thoughts. Kokichi comments that no one has ever called him naive before, and is taken aback by it. In the Japanese version, Kaito calls Kokichi "pure" instead of "naive", which garners the same shocked result from the supreme leader.

During Chapter 4, Kokichi attempts to separate Kaito and Shuichi by telling Shuichi that he should be his friend and partner instead. As a result, the two keep fighting for Shuichi's attention, and Kokichi even teasingly mocks Kaito by asking twice if he likes him or something because he keeps pestering him when he is trying to talk with Shuichi. Kokichi claims that Kaito's naive behavior is troublesome for Shuichi's work as a detective and tells him to leave Shuichi alone. During the fourth trial, he is highly amused when Shuichi talks back to Kaito even though he is supposed to be his sidekick and he thinks it's really funny when Kaito loses his cool. He smugly mocks Kaito whenever Shuichi agrees with his reasoning over Kaito's and proclaims how well he and Shuichi work together. The two's attitudes towards each other turn increasingly more aggressive when it becomes apparent that Gonta might be the culprit. Kaito refuses to believe it and believes Kokichi is just trying to trick and blame Gonta, while in turn Kokichi becomes very frustrated when Kaito's stubbornness derails the trial and even causes a great risk for everyone else. Kaito yells at Kokichi to stop when he is shouting at Gonta, and with complete seriousness says that he doesn't want to survive if it means stooping down to Kokichi's level. Kokichi seems genuinely very insulted by this, stating it was a low blow with a faked smile, and then furiously yells at Kaito to go die in a hole and stop getting in the way of people who want to survive. Kokichi then appears to calm down his anger a bit and eventually Kaito is forced to realize that Gonta truly is the culprit. However, it's heavily implied that Kaito still voted for Kokichi out of spite. When Kokichi turns silent after the execution, Kaito demands him to explain himself to everyone if he truly did care about Gonta like he appeared to right before the execution. Kaito is shocked when Kokichi instead begins to act even more evil than before. When Kokichi calls Miu and Gonta's deaths meaningless, Kaito loses his temper and attacks Kokichi, but gets instead punched by the smaller boy due to his weakened state caused by the illness. Kokichi mockingly claims that the punch was just an accident and then indirectly reveals that he knows Kaito is ill and has lied to everyone about it.

After "revealing" himself as the mastermind, Kokichi captures Kaito because his spirit would get everyone fired up and his hotheadedness is troublesome in general. He believes that Kaito's attitude with a group of other people could cause a new killing game. Kaito does attempt to persuade Kokichi for answers by threatening him with a crossbow retrieved by Himiko and shooting him in the arm with it. They begin to start fighting, but it's interrupted by Maki breaking into the hangar to torture and kill Kokichi herself. Kaito, however, protects Kokichi from the finishing arrow. Even when both had been shot with the poison arrow Maki equipped, Kaito swore he wouldn't allow himself to die, and stop him, and Kokichi is impressed by his determination. He calls him "not boring", which is a huge and genuine compliment Kokichi has given only to Shuichi and Kaede besides Kaito, indicating that Kaito earned his respect.

Kaito then murdered Kokichi, according to their plan, seemingly to protect Maki and because of blackmail. However, even though Kaito was roped into helping with Kokichi's plan, he later reveals that he was actually convinced when it's purpose was to ruin the killing game, and admitted that he found the idea pretty awesome, and willingly went through with the plan to end the killing game with Kokichi. Kaito also listened to Kokichi's last words, but later admits that he wasn't sure what was true and what was Kokichi's true character. Kaito admits he hated Kokichi and that he pissed him off, but also admits that only a crazy guy like him could have a crazy plan needed to defeat Monokuma, and the two appeared to form a sort of mutual respect during their last moments.[1]

“Kaito! This trial won't go anywhere if you don't suspect anyone!”
— Kokichi reminding Kaito that he needs to suspect the others during a Class Trial in the demo version.

“Kaito, it's good to be confident, but not when you're wrong about everything all the time.”
— Kokichi about Kaito during the second Class Trial.

“Nee-heehee... You love to believe, don't you, Kaito? But that belief can turn against you, especially in this killing game, y'know?”
— Kokichi about Kaito's policy on believing everyone, during the fourth Class Trial.

“Listen up, Kokichi! To hell with this "game of suspicion" crap! I will never be okay with it! I'm just gonna believe in everyone! Instead of suspecting my friends, I'm gonna find the truth by believing in them!”
— Kaito sticking to his policy of believing everyone despite Kokichi's claims during the fourth Class Trial.

“Then just die in a hole for all I care! We wanna live, so stop getting in our way!”
— Kokichi after Kaito keeps defending Gonta during the fourth Class Trial.

“He was crazy, but that let him come up with some crazy plans...And we needed a crazy plan in order to stand a chance against Monokuma.”
— Kaito appreciating Kokichi's crazy plan.

“Oh, I hate his guts. Honestly, I'm still pissed off at him. He made us go through so much crap. To the end- No, even beyond that... He was a lying sack of shit.”
— Kaito about Kokichi after explaining their plan; still not having warmed up to him despite working together with him.

“Idiot, everyone's only got one life and there's no way I'd waste mine on your story!”
— Kaito after Kokichi suggests him to bet two lives to hear his origin story, in Ultimate Talent Development Plan.

The two are shipped mostly as a result of being a typical Foe Yay ship. The reasons for that are their polar opposite views on believing in the others and the contrasting roles of a hero and a villain. Some fans however prefer them as enemies.

In both of their Hotel Kumasutra events, some fans can see some striking similarities to their dynamic leading to more evidence for possible chemistry between them. Kaito's event revolves around him and a rival who pushes and trash talks him as they fight but has also built an emotional connection together through their battles. This can be seen as what Kaito and Kokichi's relationship could have become more like in a more normal environment without the constant need for facade they both put up in the game. Both of them clash but by Chapter 5 have built an understanding and respect for each other, it can also be seen in other instances such as the Ultimate Talent Development Plan that they can have much more light-hearted banter and arguments.

Kokichi's love event revolves around someone willing to chase and fight against his "evil" actions as well as being someone he considers interesting or "not boring." Kaito is someone who fits this description as he chases after and argues with Kokichi quite often and despite everything still has concern for and searches for depth in Kokichi and his mask. The Hotel Kumasutra events are meant to show an idealized fantasy of what each character looks for in romance and some event's cases more sexual topics. The display of Kaito and Kokichi's dynamic in these events gives more evidence that they could function quite well as healthy romantic partners. 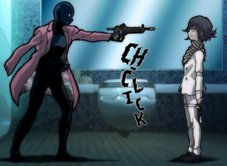