• Brooding Boy, Gentle Girl
• Ships That Pass in the Night

Owamiki is the het ship between Mondo Owada and Mikan Tsumiki from the Danganronpa fandom.

In one event, Mikan had been chasing after Mondo (because his hand was bleeding everywhere, which he didn't notice), only issue is that she keeps tripping and falling. She then begins to apologize repeatedly. Mondo yells at her to calm down, leading Mikan to start crying and pleading with him not to hit her. Mondo, of course, says he'd never do anything so pathetic and apologizes for shouting and promises he's not mad at her. When Mikan calms down and asks him to come to the infirmary so she can treat his injury, Mondo says getting his hands all scraped up from fights is no big deal to him, but he agrees anyway so Mikan won't cry anymore.

In the other event, Mikan checks up on Mondo to see if he injured himself again. Mondo is at first annoyed that Mikan views him as the type to injure himself often, but upon seeing her afraid of him, he assures her that he's not mad at her for thinking so and promises that he'll control his rage.

Mikan – “Ah!”
Mondo – “Hey, whoa, the table's all messed up! You sure you're okay!?”
Mikan – “Eeek, I'm so sorry! But don't worry about me! Mondo, you...”
Mondo – “L-Like I said, what's the matter!? Chill out already!”
Mikan – “Eeek! I-I'm sorry! I'll apologize, so please don't hit me!”
Mondo – “Th-There's no way I'd ever do such a loser thing as raise my hand against a girl! So calm down...and hurry up and close your legs already.”
Mikan – “Y-You're not mad?”
Mondo – “I'm not mad... Sorry I yelled. It's a bad habit of mine... I've freaked out Chihiro before, even when I tried to be careful.”
— Mikan being worried about Mondo and the latter being nice to her in their event in Ultimate Talent Development Plan.

Mikan – “Th-That's not okay. Even if the injury is small, it can still get infected. A-And about fights...I can't stop you, but at least let me treat your injuries.”
Mondo – “Okay, I got it... I'll do what you say.”
Mikan – “R-Really?”
Mondo – “Yeah...I promise. So don't start crying again.”
— Mondo promises to listen to Mikan's advice.

Mikan – “Oh...I apologized again!”
Mondo – “You're pushing it...but I'm not gonna yell at you. I've decided to really try to keep that rage in check.”
Mikan – “I'll try not to cry or apologize too much in front of you, so...please forgive me...”
Mondo – “Right. Good luck.”
— Mondo promises to control his rage while Mikan promises to cry and apologize less around him.

Owamiki is one of several ships that sailed as a result of the interactions between characters in Danganronpa V3's bonus mode, Ultimate Talent Development Plan. It gained its popularity because of the two's "Nice Girl, Bad Boy" status, as well as due to their personalities being considered matching, with Mondo's talent causing him to get injured often and Mikan treating his injuries, and with Mondo showing the nice side of his personality (i.e. his code to never hit a girl) around her.

Nonetheless, because they only interact with each other in a bonus mode, only a small part of the fanbase is aware of the ship. Additionally, both characters have their much more popular ships from the canon. In spite of this, the ship has a fair number of fan fictions dedicated to it. 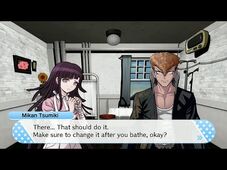