Owatsu is the het ship between Mondo Owada and Kaede Akamatsu from the Danganronpa fandom.

Kaede and Mondo never interact in the main games. They are from separate entries in the canon trilogy; Mondo being from Danganronpa: Trigger Happy Havoc, and Kaede being from New Danganronpa V3: Killing Harmony. Additionally, they are both canonically deceased, and Kaede is dead before Tsumugi's impersonation of Mondo during the sixth trial of her game. Therefore, they have never even seen each other. So there is no main-game basis for the ship, unfortunately.

However, they do share a brief conversation in Danganronpa S: Ultimate Summer Camp. During Kaede's "Potential of Talent" event, she is presented with the task of unlocking new potential for her talent. She is able to choose between three options, the third of which is to write a biker gang theme. Choosing this cues an interaction with Mondo, where she approaches him with the idea. He appears intrigued, though not entirely sold. They talk about the history of biker gang songs, with Kaede commenting that she would object to making such loud noise at night. This seems to put him down a little, but he recovers swiftly. He eventually agrees to let Kaede write him a theme, should he ever start his own company. The event finishes with Kaede attempting to write a song based on Mondo.

The pair, despite never canonically interacting, have potential given the tropes their dynamic represent. While Mondo is a gruff, loud, and aggressive type, Kaede is more kind, outgoing, and friendly. As a bonus, there is the silly fact that Mondo is the Ultimate Biker Gang Leader, and the canonical dislike listed on Kaede's Report Card is "bicycles". These are examples of the "Brooding Boy, Gentle Girl" and "Opposites Attract" tropes. Despite their differences, though, they are both genuinely caring and good people. They have a tendency to go with their hearts over their heads, and they both have strong convictions they abide by. This provides an opportunity for connection and friendship, which was what sailed the ship in the first place.

Mondo – “Huh, never knew they used Mexican folk songs, and I've been hearin' those honks my whole life.”
Kaede – “Interesting choice, huh? I heard it played outside my house once and I was so surprised. It makes me wonder why that song in particular got so popular with biker gangs. But...I can't get behind making so much noise late at night. You know, no offense.”
Mondo – “We ain't doin' it to win approval. But...themes are nice to have. If I ever run my own business, I'll have ya write my company tune.”
— Danganronpa S: Ultimate Summer Camp

Owatsu is a very rare pair, only existing in small corners of the fandom. As it stands, its popularity was mostly started as an offset from the Danganronpa fanfiction Blackened Skies, where both characters feature and frequently interact. There are of course other instances of the ship separate from Blackened Skies, although they are few and far between. A handful of fanworks and art pieces have been created based on the two. This was only enhanced by the existence of the event between them in Danganronpa S: Ultimate Summer Camp. Owatsu currently has 2+ works on AO3.

Beware of spoilers for Blackened Skies in this paragraph! Within Blackened Skies, Kaede and Mondo are good friends. They awaken together at the beginning of the fic, along with Chiaki Nanami. From there, they form a strange but endearing bond. They are often found exploring together, and even working out together with their mutual friend Kaito Momota. This in particular has resulted in Kaede's inner dialogue commenting on Mondo's physique, indicating that she considers him attractive within the Blackened Skies canon. A big moment in their friendship is when Mondo, in a fit of anger (not directed at her, though she attempts to intervene), very nearly kills Kaede; in response, she almost retaliates by trying to kill him before she can stop herself. They both feel immense remorse for this, but they eventually reconcile and share a sweet (yet awkward) embrace. Altogether, in this fanfiction they uphold the dynamics that would be expected given their personalities, and it shows how a relationship between them could function.

An additional rare pair ship that incorporates Kaede and Mondo is the crackship between Kaede, Mondo, and Mikan. This ship is also an offset of Blackened Skies, commonly called the "Bunk Bed Trio" by fans in the fanfiction's Discord server. The three characters are often seen together in Blackened Skies, and Mondo is already a part of an existing rare pair with Mikan, Owamiki, which is shockingly popular amongst the rare pair community. The "Bunk Bed Trio" ship is majorly played for laughs, as the entire "bunk bed" premise is the result of an inside joke within the Discord server it originated from. But it still bears mentioning.

Kaede's "Potential of Talent" event with Mondo on Danganronpa Wiki 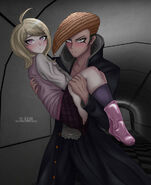 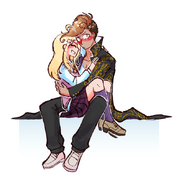