For a long time Eda had only her owl palisman, Owlbert and the Owl House's wooden owl guardian, Hooty for company until she found a little demon and named him King. Eda and King became trouble makers and outcasts on the Boiling Isles, while Owlbert and Hooty do want they can to keep them safe. The Owl Lady caring about her Owl House companions has her forming a family-like bond with them, since she had cut ties with her biological family and friends due to her curse. After King's crown was stolen by the Warden and none of the four alone can get it back from him, help arrives when Eda sent Owlbert on one of his trips to the human realm. This led to Eda meeting Luz Noceda when she appeared near her while she was selling the human stuff that Owlbert brought back. Later on, Eda shows Luz her staff, and she meet Owlbert. She then introduced her to the Owl House and meets Hooty and King. Luz didn't got along with Hooty, but when she saw King she jumped to hug him.

Eda stated to Luz that Owlbert is more than just his staff, and by the time Luz has one she must treat her staff as a friend. From Eda and King's side, Hooty is the most annoying one from the Owl House since he always wants to talk with someone and he likes to mess around with people so they could pay him attention. Still, Eda and King care for him, but King doesn't show it that much like Eda does. Luz does get annoying when Hooty talks a lot about boring stories, but she likes him and treats him kindly, like once when he got hurt, she put him a plaster and welcome him to the weirdo club. When Luz and King get informed of Eda's curse, the two, as well as Owlbert, begin to do want ever they can to help Eda from turning into her owl beast form. As for Hooty, he makes sure that Eda doesn't get captured by members of the Emperor's Coven.

When Eda and Owlbert got caught by Lilith in the Emperor's castle, Luz came back to the Owl House really sad. When King asked Luz where was Eda, she knelt on the floor almost crying. Hooty and King got near her sadly and tried to cheer her up. Both King and Hooty told Luz they were coming with her to save them, but Luz told them they can't go since is something she needs to do on her own, but thanked them for trying to help. After Lilith decided to help Eda escape, she made a spell so Eda and she could share the curse she put on Eda when she was young. With Eda and Owlbert returned home, Hooty and King become happy again, thanking Luz for bringing them back. Also they had to accept Lilith as a new member of the Owl House, since now Eda and Lilith are sharing the same curse and Lilith can't go back to the Emperor's Coven.

While Luz makes it her mission to teach the Clawthorne sisters her way of magic, since the curse has weakened their magic and Luz continues to study glyphs to help all three of them learn new spells. Even though Lilith first started out as an enemy to those who reside in the Owl House, Luz and Eda come to expect her and help Lilith adjust to their way of life. King also gave Lilith a chance, while Hooty becomes very fund of Lilith even though she couldn't stand him during her first days at the House Owl, but she eventually begins to except him as a friend. Lilith was also present when Luz and Hooty accompany King to the island Eda found him on, and help him to except his true origin story and how he has a father out there. Lilith has enjoyed her time at the Owl House and becoming part of its makeshift family, as she finally reconnects with Eda, who helps Lilith with the curse, learning new things about glyphs with Luz, uncovers an known part of the Isle's history through King and spending time with Hooty as her new best friend. After Gwendolyn Clawthorne payed one of her visits to Eda and accidently puts her daughters in danger, Lilith decides to leave the Owl House so can catch up on lost time with her mother. Hooty was sad that Lilith decided to leave them, while the others were surprised by this, but still support Lilith in her choice to leave. Lilith reassures them that she has enough curse repelling elixir on hand and promises to stay in touch with Hooty. In fact, it was one of her messages to Hooty that gives him the idea to help Eda, Luz and King with their problems in "Knock, Knock, Knockin' on Hooty's Door".

With Eda's original portal to the human realm gone, Luz looks for ways to get back home with Eda and the other's support, as her new found family do what they can to help Luz create a new portal that will take her home. Luz comes close to completing her task as Eda, King and Hooty watch Luz's back as she tests her prototype portal, encase something went wrong in "Yesterday's Lies". Before the portal began to close in on itself and the three had no choice but to pull Luz out for her own safety, Luz accidently upsets her mother when she told her that she chose to stay in the demon realm and the little remaining time they had left forces Luz to promise her mother that she'll stay in the human realm once she finds away back for good. Luz doesn't tell Eda, King and Hooty this as she lies about her mother wanting to meet them, as the three begin to make plans for when they company Luz on a day trip to her home realm, or the fact that the promise she just made may result in Luz never being able to see her demon realm family again. This is why Luz begins to have fix feelings of wanting to go back home where her mother is now waiting for Luz's permanent return to her and wanting to continue spending time with her new family who get her.

The Owl House Family is one of the most well-liked semi-canon family ships within the fandom. While none of them are blood-related, they treat themselves as one family. One phrase that describes their family bond is Luz's phrase: "us weirdos have to stick together". This phrase actually describe this family, since Eda and King became the two most wanted trouble makers from the Boiling Isles, Hooty is a talking-living house, Owlbert is a living staff (as all the ones from The Owl House series), along with Luz having problems for socializing with other people and had trouble making human friends because she had strange likes. While on the demon realm her likes can be considered as normal interests.

Some like to view Lilith Clawthorne as a new addition or surrogate member to the Owl House Family, as she couldn't go back to the Emperor's Coven, currently has half of Eda's curse in her and she did move into the Owl House before deciding to go live with her mother. A small group of fans were sad that Lilith didn't stay part of the Owl House Family for long and are hoping that she'll come back to re-join them in the future. There have also been another group of fans who are hoping that a redeemed Hunter (A.K.A. the Golden Guard) will be given a chance to become part of Luz's makeshift family, like Lilith did after she helped Luz and King save Eda, from them seeing Luz as one of the people who'll hopefully convince Hunter to leave Belos's side and get the chance to learn what true family bonds are like. With Luz as his new-found sister, while Eda serves as his possible mother-like figure. Also, Willow, Gus and Amity are often included in this makeshift family since they visit the house quite often, they are aware of what's happens in it and accept it. 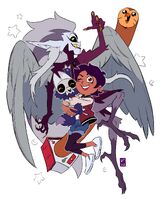 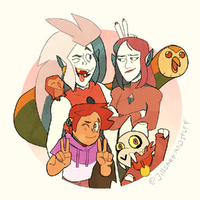