Ozglyn is the het ship between Ozpin and Glynda Goodwitch from the RWBY fandom.

Glynda and Ozpin are fellow staff members at Beacon Academy. It is never stated how the two met or why Glynda is in Ozpin's group, only that they knew each other in some way before the events of rwby.

Glynda then also rolls her eyes at Ozpin right before he offers Ruby an invitation to go to Beacon, obviously knowing him well enough to know where the conversation was heading. She is shown to be a loyal subordinate and respects his decision to admit Ruby into Beacon. Despite their differences she is unflinchingly loyal to Ozpin and will follow him without question. They are then both later seen standing near each other and watching the initiation process together. Later she gets annoyed at the foodfight the others had saying they're supposed to be the defenders of remnant. Ozpin then reminds her that they're still children and to let them be.

In volume 3 the two are seen together confronting Winter and Qrow after their fight and cleaning up their mess. When Ironwood questions Ozpin's leadership before the Vytal Festival begins, Glynda sides with Ozpin, stating that Ozpin's experience makes him more qualified than James thinks. She also backs Ozpin in his criticism of Ironwood's heavy-handed methods of what constitutes as "safety". They are both also members of Ozpin's group whose goal is protecting the world from dangers that are kept secret from the public. We also have no idea what Glynda's reaction was after Ozpin's "death" but she is now the defacto Headmistress of Beacon academy and is trying to fix it in his stead.

Ozglyn used to be a popular ship back in the first 3 volumes of RWBY since they were almost always seen together. The ship waned almost completely when Ozpin "died" at the end of volume 3 and then when his secret past with Salem was revealed in volume 6 the ship pretty much sank after that. The two have been compared to Professor McGonagall and Professor Dumbledore from the Harry Potter series. Since they both have similar roles to those two, they have similar personalities to them and Ozpin is a wizard like Dumbledore and Glynda is a witch like McGonagall. They were also considered to be like the mom and dad of Beacon Academy since they acted like surrogate parents to many of the characters in the series. Some fans of the ship have even refered to Glynda as Ozpin's "wife". Fans also jokingly said after Glynda reappered briefly in volume 8, that Ozpin's "real wife" came back. 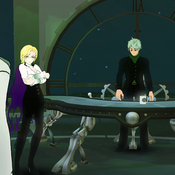