“I'm lovin' the girl power, Peach! Win this one for the ladies!”
— Princess Daisy[1]

Peaisy is the femslash ship between Princess Peach and Princess Daisy from the Super Mario fandom.

Princess Peach and Princess Daisy are two of the many royal figures known by Mario and gang. It is unknown specifically when the duo met, however both have been saved by Mario in the past. They have also at one point shared similar hairstyles. With that said, ever since Mario Tennis, the pair has been depicted as best friends and 'sisters-in-arms.'

Peach and Daisy are commonly paired up together in spin off series, with Mario Golf: Toadstool Tour being the first in which they are each other's default partner. Mario Kart: Double Dash allows them to use the Heart item, while Mario Party 7 instead gives them a flower orb. Official art depicting the two princesses shows them being friends. For example, the Line sticker series, Mario Bro's Relaxing Life, has Peach and Daisy take a selfie together. They are also seen together in several of the Mario Party renders.

Although the two women are on good terms usually, there have been cases where they are instead depicted as rivals. The Mario Striker sub series have the duo face off each other in Challenge Mode. Kodansha Deluxe Mario and Super Mario Kun also has the princesses go against each other for Mario's affection. Princess Daisy will also fight Peach in Daisy's Classic Mode in Smash Bros. However, despite all this, Fortune Street shows the duo root for each other even as competitors.

A fairly common misconception of the duo is that they are cousins. The source of the claim comes from the Prima guides for Mario Kart: Double Dash!! and Mario Kart Wii. However, Prima has a history of sharing incorrect info―such as listing Toad and Toadette as siblings and stating Luigi was in Super Mario Land―and is not associated with Nintendo. Nintendo has also never confirmed the claim to be true in any of the official websites, games, or books. They have only listed Daisy as Peach's best friend. It is also worth noting that no dialogue between the two has them refer to each other with familial terms. Their partner names from the Mario Party sub series are also the same, with them being called the following: "Lordly Ladies" in Mario Party 5, "Damsels in Success" during Mario Party 8, and finally "Power Princesses" in Mario Party DS.

In Super Smash Bros Ultimate, Princess Daisy is Peach's echo character. Besides differing animations and aesthetics, the two characters play relatively the same. In Daisy's end card, the two princesses are shown posing together. Screenshots and trailers from the official Smash website also show the pair fighting together. Before, Peach used to have an orange alt resembling Daisy, with Melee resembling her classic look and the rest being her modern. It has now been replaced with a gold alt. Daisy, on the other hand, has a pink alt featuring a dress similar to Peach's. For the Mio and Mayu spirit fight, the duo fight together, likely due to Daisy sharing a similar moveset to Peach.

“Let's swap shops, Peach. You know as a symbol of friendship between the Mushroom Kingdom and Sarasaland!”
— Princess Daisy, Fortune Street

“Daisy! I’m shocked that you would run off to win and leave behind your sister-in-arms. Shocked!”
— Princess Peach, Fortune Street

Peach and Daisy are shipped together due to their statuses as princesses. Their close friendship is yet another reason as well. The ship itself goes into the trope of friends to lovers, as well as subverting the save the princess trope in certain fics.

In terms of fanart, they will typically be drawn kissing or being surrounded by flowers due to Daisy's theming with said flowers. The two princesses may also be shown having tea parties or playing sports together. Although, Daisy is typically portrayed as being the more athletic of the pair. Due to the duo sharing the race tracks Peach Beach and Sweet, Sweet Canyon, they may be depicted visiting these locales for vacation purposes.

Fanfiction of the duo may involve either princess confessing their feelings. However, typically its Peach who admits to having a romantic crush. They may also be depicted ballroom dancing or marrying each other as well. The latter has increased even more thanks to Super Mario Odyssey. 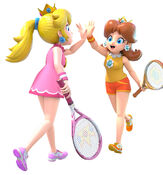 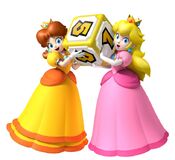 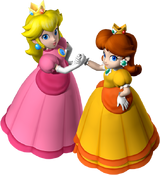 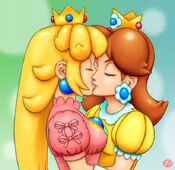 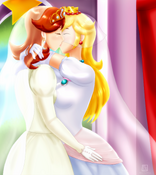 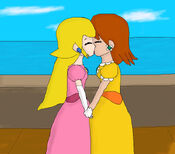 Peachaisalina ― the ship between Princess Peach, Daisy, and Rosalina