PeggySous is the het ship between Peggy Carter and Daniel Sousa from the Agent Carter fandom.

Peggy and Daniel work together in the Strategic Scientific Reserve after the war, bonding over being two of the more decent people at the place. Daniel is smitten with Peggy's strength and grace and develops feelings for her, while she, still mourning the loss of Steve Rogers, is not quite ready to admit that she may be developing feelings for him too.

NOW IS NOT THE END

After the briefing on Howard Stark's disappearance, Kravinsky makes a comment on the amount of men Peggy knew during the war, which Daniel hears. He demands Kravinsky apologize to her, but he doesn't. Peggy is about to talk about what Daniel did, which he interprets as about to be a thank you, but she tells him that he shouldn't have done so. She's grateful for the help, but she can handle herself on her own. He understands, but he doesn't like it.

At work the next day, Peggy sees a picture of Howard in a boat on Daniel's desk and gets an idea. She tells him he should go home at night, but Daniel wants to solve the case as soon as possible. Peggy tells him that Howard would only get in the boat if he really liked the girl, since he can't swim, throwing him off the lead, to help Howard. She notices a small meeting going on, and Daniel tells her that Jack got a lead on someone trying to sell on of Stark's inventions, but doesn't know where. She steals his cup, which just confuses him.

The next day Daniel finds Peggy going over some case files from Captain America's. He apologizes but she says it's fine. She tells him she didn't look through the file often. He distracts her with a small story about him, which makes her laugh. He's about to leave, just as Peggy tells him he's one of the lucky ones.

Peggy is about to leave as she looks over at Daniels desk and sees a newspaper. She tells him which horse to bet on. He asks if she's sure, but she's not, that's why it's called gambling. She then asks him to cover for her while she steps out and he agrees. Just before she leaves a set of pictures comes to his desk. He tells her that they could reveal the blonde (Peggy) who stole Stark's stolen tech. She asks to help him look as he starts to take out the photos. Luckily, he gets called down before he can see anything, but locks them in a drawer. She's able to get them just as Daniel is returning.

Later he looks over the pictures, which puts her on edge for a moment. He tells her that they couldn't get a shot of the blonde's face. Peggy assures them that they'll find her.

Sousa proposed to his girlfriend, Violet, and she accepted. Peggy reacted slightly badly to this and seemed annoyed.

LIFE OF THE PARTY

Sousa reveals to Peggy that his fiancé, Violet, broke off the engagement because she thinks he's in love with her. Peggy tried to comfort him.

As Peggy was about to go back to New York, Edwin Jarvis stopped her and tried to convince her to stay. Carter stated that she had many reasons to return home, but Jarvis believed she only needed one good reason to stay.

With their previous case on Isodyne Energy finally finished, Sousa wrote his report as Peggy Carter watched, sitting on the other side of the desk. Sousa then began to criticize Carter for how she acted during the case. Carter realized that Sousa was no longer her superior officer and passionately kissed him. Sousa laughed and passionately kissed Carter in return.

In 1955, it is revealed that Peggy and Daniel broke up some time after they got together but before 1955, and Sousa would go on to be known as Carter's "old partner" by others. 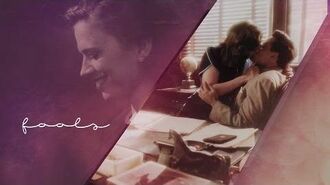 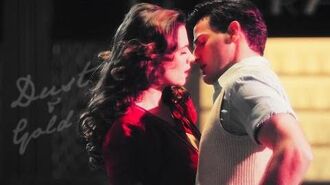 Daniel & Peggy Why are we so incomplete