• Hair Contrast Duo — Ibuki's hair is mostly black, while Peko's is silver.
• Holding Hands — according to Ibuki, she and Peko held hands at one point. Though the latter denies this.
• Not a Date — after Ibuki had brought up the two of them walking together on the beach, Peko (unsuccessfully) attempts to divert any suspicion that there is something going on between them.
• Odd Friendship — in spite of being polar opposites, both girls appear to be on friendly terms with each other.
• Opposites Attract — Ibuki is loud, cheerful, and goofy, while Peko is calm, quiet, and serious.
• Ship Tease — Teruteru fantasizes about both girls having sex. He also refers to their relationship as a "moist lily." (In Japanese, "lily" means "yuri.")

Pekobuki is the femslash ship between Ibuki Mioda and Peko Pekoyama from the Danganronpa fandom.

Ibuki appears to be attracted to Peko, and seems to admire her strong and stoic personality, finding it to be cool. Peko, on the other hand, isn't fond of Ibuki's overly energetic and silly behavior, but willingly tolerates it.

In Chapter 1, when Peko offers to be on guard duty, Ibuki expresses concern over her being all by herself. However, Peko assures her that she doesn't mind. Ibuki then laughs, and says that if she were to write a song about this, she would title it "Lonely Girl in the Storage Room." After Peko leaves the room, Ibuki grins and mutters to herself that she feels Peko has "this super cool, melancholy vibe."

In a Special Event during the first chapter, the two are walking together on the beach when they meet Hajime Hinata, Kazuichi Soda, and Teruteru Hanamura. Ibuki winks and claims she was holding hands with Peko, though Peko stoically denies this and tells Teruteru not to fantasize about weird things when he imagines the two girls having sex. When Peko talks about splitting open a coconut and describes how she wouldn't make a mistake with a sword, Ibuki gets really excited, screaming that she's so cool and that she might fall in love with her quiet words. After splitting the coconut in half, Ibuki compliments Peko on her success and tries to give her a high five while referring to her as "Peko-Peko." Peko mostly ignores her behavior.

In Chapter 2, Peko arrives in a swimsuit at the diner to meet up with the other girls to go swimming. Kazuichi is there and says to Hajime that a woman with wet, slicked back hair is pretty nice. Ibuki adds on by saying her body is pretty fine too.

In episode 6 of Despair Arc, Ibuki notices Peko and Fuyuhiko Kuzuryu talking amongst themselves, and abruptly intervenes on their conversation. Ibuki can be seen blushing when she leans in close to Peko, who also blushes slightly.

Towards the ending of Hope Arc, when Ibuki shoves a piece of spicy meat into Ryota Mitarai's mouth, Peko can be seen smiling at her.

In Ultimate Talent Development Plan, after the winter closing ceremony, Ibuki asks Peko to walk home together. Ibuki tells Peko that even though Christmas was just yesterday, she's all ready for next year's. Peko says that the party they had was fun, but thinks that Ibuki is getting ahead of herself. She does, however, agree that it was enjoyable, which makes Ibuki happy. The two promise that they'll both come to next year's gathering.

“I was holding hands with Peko and going for a walk when I saw you guys!”
— Ibuki claiming that she and Peko were holding hands.

“Kyeaaaah! So coooool! I might just fall in love with those quiet words of yours!”
— Ibuki gushing over Peko's words.

“But it'll be lonely there by yourself.”
— Ibuki concerned over Peko being on her own.

“Mmm, seeing Peko's back as she walks away makes me feel like she's got this super cool, melancholy vibe...”
— Ibuki admiring Peko's vibe.

“Oh, you agree with Ibuki!? That makes me oh so happy!”
— Ibuki overjoyed that Peko agrees that the party was fun.

“Yes. No matter what I'm doing this time next year... I'll definitely come to our gathering.”
— Peko promising Ibuki that she'll attend next year's party.

Ibuki is loud, cheerful and goofy, while Peko is calm, quiet and serious. Some fans consider this a perfect example of the "opposites attract" trope. The ship mainly caught attention with the Special Event in Chapter 1, due to Ibuki claiming she held hands with Peko, and the latter telling Teruteru not to get perverted thoughts about the two. Another contributor to the ship was Ibuki's consistent admiration of Peko's traits. Mainly her stoicism, speech style, perceived independence, and even physical attraction to her body. The ship is sometimes compared to Twobuki, because Ibuki seems to admire both Peko and the Ultimate Imposter for similar reasons.

The ship is somewhat popular in the fandom with a respectable amount of fan art and fiction. However, it is still considered a rarepair as it naturally loses to some of the characters' more popular ships like Band Aid and Kuzupeko. Some even consider it a crack ship due to the two having minimal interaction. On AO3, it is currently the second most-written ship for Peko, and the third most-written for Ibuki.

Aesthetically, the similarities of their character designs are able to contrast and match to make edits and clothing swaps. Both girls wear a similar sailor-style uniform with a striped collar, ribbon, and pleated skirt. Peko has silver hair, while Ibuki's is mostly black. Peko's outfit is all black with red accessories, while Ibuki's is primarily white with pink and blue accessories. Both characters' respective eye color also matches their ribbon. Some find these differences and similarities even in their clothing to be attractive. 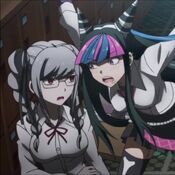 ...garners a rare smile from the swordswoman. 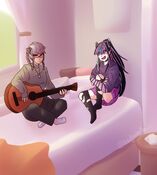 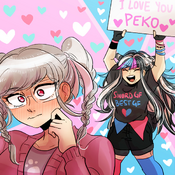 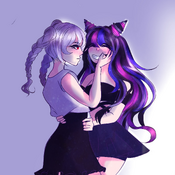 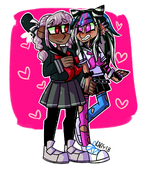 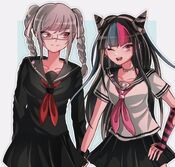 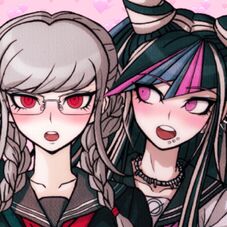