• Birds of a Feather — both characters have a soft spot for animals.
• Lookalike Lovers — both Gundham and Peko's character designs can be described as intimidating, and their color palette primarily consists of black and gray.

Pekodam is the het ship between Gundham Tanaka and Peko Pekoyama from the Danganronpa fandom.

Both characters have never been seen having any significant interactions with each other in canon. As such, not much is known about their relationship, other than being acquainted by virtue of being former classmates.

During Peko's first Free Time Event, she tells Hajime Hinata about how she is no longer able to pet animals, as they run away from her in fear of her menacing presence. Believing that Gundham would be able to help her, Hajime suggests that she go see him and ask him if she can pet his hamsters. Peko grins and says she should look for Gundham right now, seemingly a little too eager.

In Chapter 3, following her death, Gundham says that he accepts Peko's desire to remain loyal to her owner, while also calling her a "foolish soul." Due to her limitations as a mere tool.

In Episode 10 of Despair Arc, Peko is the first to greet back Gundham after he returns from fighting a mob of protestors with Nekomaru Nidai.

During one event in Ultimate Talent Development Plan, Peko is seen spending time with Gundham and Gonta Gokuhara. She thanks the two of them for helping her not have animals run away from her. Gundham laughs and bestows upon Peko the title of "Swordmaster of Asura's Spirit." Though Peko awkwardly declines the title. It is implied that the three of them are all friends, as Gonta makes the statement "Before coming here, Gonta never think he get to pet animals with human friends." Peko says that as long as Gonta is around, she will be able to deal with Gundham.

During the events of Danganronpa S: Ultimate Summer Camp, the two arrange a secret meeting at the farm where they bond over watching the Dark Devas play with the farm animals. Gundham describes the moment as "meaningful," and Peko enjoys taking pictures of the animals. This event also reveals that Peko follows him on social media.

The ship sailed as a result of Peko's love for animals, and seeing as how Gundham is the Ultimate Breeder, fans believe the two would get along well together, and that Gundham would be able to help Peko have animals warm up to her. Some fans also like how even though both characters have a somewhat intimidating appearance, their shared love of animals is viewed as wholesome.

However, because they have almost never interacted with each other, it's a relatively rare pairing for both. It loses in popularity to their main ships, Kuzupeko and Sondam respectively. While the ship is greatly overshadowed, there are still some who acknowledge it, and some who like it platonically. 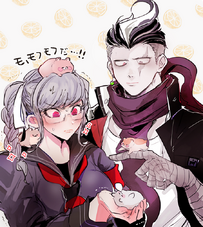 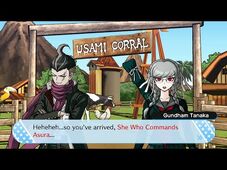