Pekonia is the femslash ship between Peko Pekoyama and Sonia Nevermind from the Danganronpa fandom.

Sonia and Peko do not interact much, but they seem to be friends. In a secret scene during Chapter 1, Sonia and Peko attend a girls-only gathering event where they bake together. During Chapter 2, Sonia once again holds a girls-only gathering event at the beach, which Peko attends. Before Peko's execution in Chapter 2, after she calls herself a tool for Fuyuhiko Kuzuryu, Sonia denies this profusely, saying that the time they spent together was proof that Peko was her own person.

In Sonia's Ultimate Talent Development Plan, at the Sports Festival, she is set as the captain of the basketball team. Between the options of what plans will she go with, if the player chooses "offense, offense, offense!", she may choose Peko to be a part of her basketball team, along with Akane Owari. Sonia then yells to both girls, "Sally forth!" Akane doubts herself at first, but quickly becomes frenzied. Peko asks Sonia why she did that, after pointing out to Akane that they were playing basketball, not martial arts. Sonia gets embarrassed and apologizes, claiming that she had always wanted to tell both her and Akane to sally forth. Afterwards, Sonia had set an "unbeatable" offense with the two.

Peko and Sonia have some similarities as well. They heavily try to protect the people that are important to them, most notably Gundham Tanaka for Sonia and Fuyuhiko for Peko. They are so close to these two that they are sometimes considered Gundham and Fuyuhiko's respective love interests. They also both have a love for cute animals, particularly Gundham's hamsters. However, the two also have a good amount of differences, notably their opposing personalities: Sonia is very kind and approachable, while Peko is at first rather cold and distant.

Peko and Sonia's personalities contrast each other in ways many think are positive. Sonia is sweet and open, while Peko is quiet and mysterious. Since Peko also has issues understanding her own worth, many fans of the ship believe Sonia would help her in this regard and treat her kindly. In most fanworks, this is amplified with Sonia shown to be excited and fascinated by Peko, while Peko has difficulty understanding Sonia's personality and interest in her.

Pekonia is not a very popular ship in the fandom. It has rival ships such as Sondam and Kuzupeko which are much more popular, but this ship is enjoyed by some fans who view those relationships as platonic. 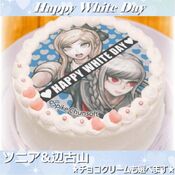