Pekosaba is the femslash ship between Mukuro Ikusaba and Peko Pekoyama from the Danganronpa fandom.

The two girls only share one major canon interaction in the series. In episode 8 of Despair Arc, Peko was asked by Nagito Komaeda to keep an eye on Mukuro, while the rest of Class 77-B searched for their missing classmate, Mikan Tsumiki. Peko obliged to his request, and trailed down the soldier to the water fountain near the school. Once Mukuro realized that she was being pursued by the swordswoman, the two quickly engaged in duel. Mukuro asked Peko why she was following her, and Peko answered that someone asked her to see what she was up to. Mukuro commented that whoever it was must have been someone close to her. Irritated, Peko demanded to know what was going on, and Mukuro replied that she didn't know, before angrily stating that she doesn't like being stalked, and proceeded to attack Peko with a combat knife. Peko retaliated with her bamboo sword, which Mukuro fiercely chopped to pieces, revealing a metal blade at its core. The two then realized that their opponent was no stranger to killing. Mukuro would eventually defeat Peko off-screen, leaving her injured and unconscious, but still alive.

The two share a few interactions in Ultimate Talent Development Plan, although Mukuro spends the entirety of the game disguised as her twin sister, Junko Enoshima. In one event, Mukuro spots Peko in the dining hall with Rantaro Amami, and asks what the two of them are talking about. Peko stutteringly tells her that it isn't anything for her to worry about, but Mukuro teasingly calls her out on her suspicious response, and asks if she should mention this to Fuyuhiko Kuzuryu. Peko asks what he has to do with this, and Mukuro asks if the two of them aren't close, to which Peko replies that he is only a classmate, and then asks if she knows something that they don't. Mukuro is surprised to learn that the two of them don't even speak to each other, before Rantaro states that they weren't discussing anything bad, but mentions that Peko appears to be blushing. To prevent rumors from spreading, Peko tells Mukuro that Rantaro has been showing her pictures of animals from his travels. Mukuro is surprised to learn about Peko's love of animals, finding it adorable, and joins the two in looking at animal pictures.

During the fall school festival, Peko is feeling apprehensive about participating in an all-girl fashion show, as she does not want her face to be captured by the press. When Mukuro informs her that she's up next, Peko apologizes for being unprepared, and Mukuro asks her if she's feeling camera shy. Peko admits to being troubled by it, but realizes that trying to push the press away would only attract more attention. Mukuro reveals that she also doesn't like that kind of thing either, and that she's okay with modeling for magazines, but doesn't like being photographed all the time. Mukuro then tells Peko that she plans on sneaking out through the back with the help of Sayaka Maizono, and asks if she would like to go with her. Relieved, Peko accepts her offer and thanks her. Mukuro tells her that it isn't a problem, as her and Sayaka were the ones who invited her in the first place.

“Ohhhh, so you like animals, Peko? That's, like, so adorbs!”
— Mukuro finding Peko's love of animals to be adorable.

“Oh, are you a little camera shy? You aren't used to this kinda thing, huh?”
— Mukuro asking Peko if she is camera shy.

“R-Really!? That would be quite a relief, thank you!”
— Peko thanking Mukuro for helping her get out of performing.

The ship mainly sailed due to both girls being fierce warriors, who are incredibly skilled in their field, despite their young age. Although Mukuro is mainly an expert with firearms, she is also shown to be skilled with a blade, much like the swordswoman.

Pekosaba is quite a rare pairing within its fandom. The pairing isn't well known among fans that have only played the Danganronpa games. Those who are aware of the ship sometimes have mixed feelings about it, due to the two girls being enemies in Despair Arc. There does exist some fan content dedicated to the ship, but not a lot. There is currently eighteen works of the ship on Archive of our Own. 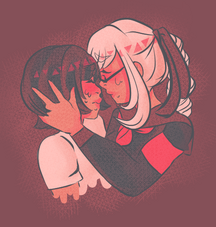