PennyWeiss is the femslash ship between Weiss Schnee and Penny Polendina from the RWBY fandom.

The two first met in volume 1 of RWBY. Weiss while running after Sun accidentally ran right into Penny and knocked her over. She initially expressed skepticism when Penny said she was going to be in the combat tournament, saying that she didn't exactly look like the type. Later, both her and Yang ran off after Penny started to weird them out them. In volume 2 when Penny ran into Ruby and Weiss again she said she had admiration for Weiss' hair.

Later in volume 3 Weiss was shocked about Penny's sudden death and feeling sad about her afterwards. The two were reunited in volume 7. After Penny abandoned Ironwood and fled with Ruby's Group, Weiss along with Ruby comforted her on her choice to come with them with her resting her head on Penny's shoulder. After Penny crash landed in front of the schnee manor in volume 8, Weiss helped carry an unconscious Penny into her room and helped to get her a doctor. Then later in chapter 10, when the virus started to take control of her Weiss helped to subdue her by using a gravity dust glyph on her to keep her in place.

In chapter 13 and 14 the two of them along with Jaune take on Cinder together. The two try there best to protect each other with Weiss saving Penny from a fatal blow by having her fall on her queen lancer glyph. Penny then also tries to save Weiss when Cinder tries to blast her off of her gravity glyph keeping her in place in midair. While on the queen lances Penny asks Weiss to run away so she can protect them and fight Cinder and presumably sacrifice herself as well, since she is what Cinder is after. Lastly, after Penny is killed by Jaune in "The Final Word", Weiss asks him what he just did and becomes saddened by her apparent death once again.

PennyWeiss is a rarepair within the RWBY fandom. Mainly because the two didn't really start talking to each other until volume 8. Some fans liked the wholesome relationship the two had with some even comparing it to White Rose. Fans were saddened by Penny's untimely death yet again. It has a small fanbase on Tumblr. 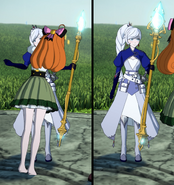