But, when you lose someone you love, everyone tells you to pick up and move on. "don't dwell on the past." "it is what she would want." And that makes me smile. Like I would ever want to forget [Gwen].
—Peter Parker, Spider Man blue #1

PeterGwen is the het ship between Peter Parker and Gwen Stacy from the Marvel fandom.

When Peter meets Gwen, he was already dating Mary Jane Watson, but he breaks up with her, and starts dating Gwen almost immediately. However, their relationship comes to a hault after Gwen's father dies, and she blames it on Spiderman. Gwen eventually is able to accept that it wasn't Spiderman's fault, and gets back together with Peter. Unfortunately, the Green Goblin manages to kill off Gwen, leaving Peter heartbroken. He eventually goes back to dating MJ.

In Earth-65, its Peter and Gwen are best friends. Because Gwen has had her powers since she was young, Peter wanted to be like her and begins to look for away for him to gain his own powers.

This section is in need of major improvement. Please help improve this article by editing it. Gwen also appears in the new reboot of the movie The Amazing Spider-man, where she appears as the primary love interest. The two date throughout the movie, and she is aware of Peter's secret.

Even though Peter promised Officer Stacy that he'll stay away from Gwen for her own proteron, the feelings they have for each other made it hard for Peter to do so. Along with his Spider-Man duties getting in the way of the times he wants to share with Gwen.

Similar to Earth-65, the Peter Parker and Gwendolyn "Gwen" Stacy of Earth-TRN702 were best friends, but after Peter turned into into the Lizard and Gwen was given little choice but to fight him, she ends up killing him. This caused Gwen to develop a fear of losing the people she cares about and stopped doing friends so she can focus on saving people. To make up for the life she failed to save.

When the Peter Parker of TRN700 tried to turn off the Collider, he accidently causes it to transport Earth-TRN702 Gwen to his dimension and a week before the insistent for some odd reason. This allowed Gwen to study the dimension she was brought to and how she came to be there, before she learns that its Peter Parker was killed. She later meets the older Peter B. Parker of Earth-TRN701, as they team up with Miles Morales who wants to help them in their mission to get back home. After they meet the other Spider heroes who are in the same passion that they are in, they form the Spider-Gang.

They were best friends. However, in some cases, she tried to get Peter to be her date for the dance. But she failed so Peter didn't want to go but went with Mary Jane Watson anyway. She thought that Peter just didn't want to go with her. She had a hard time when Peter and Harry tried out for football, mainly because the jocks would snatch up the two to go hang out with them. Peter assured her that he wouldn't stop talking to her, but, he soon had to leave her due to Sandman attacking citizens. As Spider-Man, Peter would blow her off due to villains on a constant basis, she would usually find it weird for him to just leave, but, she would ignore it and pretend he had something important to do. He would tell her he had to go to the Daily Bugle or go help his aunt, due to her medical issues. Gwen would reluctantly agree with him.

Peter saved her life when Eddie Brock, now bonded with the symbiote and going under the name Venom, hanged her from a web and watched as she screamed in horror. Gwen was first caught by Peter, however, Venom caused him to drop her and she was saved by the students next to the ballon at the time. While Peter did not catch her after she fell the second time, it is save to say that if he wasn't there, she may not have mad it out alive. On Thanksgiving, she kissed Peter and ran away, leaving some thoughts on their friendship. Later Peter tried to talk to Gwen but was distracted by Liz Allen, who wanted Peter for a boyfriend, and worked.

However, Peter started dating Liz, and Gwen started dating Harry. Then they told their feelings for each other but they'd have to break up with their current partners. Peter broke up with Liz, but Gwen not with Harry. By the end, Gwen decides to keep dating Harry, so he doesn't go back on the green. Leaving this relationship never to come.

In Earth-TRN457 alternate reality, its Peter and Gwen were friends and after he died Gwen learned that he was Spider-Man while she did an investigation on the new Spider-Man, Miles Morales. With both Spider-men gone and criminals taking advantage of it, Gwen decides to become the new web swinging hero in their place. To help her in her Spider-Woman tasks, Gwen lists the help of Peter's aunt May. When the Peter Parker of Earth-12041 returned to Earth-TRN457 with its Miles, he meets its Gwen. After Gwen tell Earth-12041 Peter that she was friends with her Peter Parker and how he was one of the reason she became Spider-Woman, she agrees to help them find the Siege Perilous shard that is located in her father's police station.

Peter and Gwen are good friends. After it was revealed that her uncle was the Jackal, Peter was the one to comfort her and tell her the story of his uncle when she was curious about the formula on his backpack. As Spider-Man, Gwen's attitude toward him was similar to Anya's towards Peter, if less harsh. Over the course of time and after fighting alongside him Gwen would respect Spider-Man as a hero. After Peter regained his body from Doc-Ock, Gwen and Anya were not speaking to Peter because of how Ock treated them while in Peter's body. In Goblin War: Part Four, both Gwen and Anya make amends with Peter after he apologizes for his (Ock's) behavior over the school year.

In Spider-Man Unmasked, Gwen and Anya discover that Peter is Spider-Man. Initially, they are hurt by the fact that Peter shared his secret identity with Miles and Max, but not them despite being his best friends as well. During the fight in the Underground Monster League the girls made up with Peter as both sides only wanted to protect each other in the end.

The game begins after the events of the first film. With Mr. Stay's death still on Gwen's mind and with the odd things that are happening at Oscorp after hours, she becomes worried that they were continuing Doctor Conner's cross-species experiments in secret. Even though Peter gained cross-specie blood when he became Spider-Man, Gwen knows that he is nothing like the one who killed her father, and asks him to accompany her on her investigation. Gwen didn't tell Peter her reasons until after she sneaks him into the company and despite what happened the last time he sneaked into Oscorp, he agrees to help Gwen to see if her suspicions are right or not. Peter was a little jealous that Gwen gets to work on the robots that the Oscorp are now building, while Gwen chuckles at Peter's comment. The two then find a cross-specie rhino and Peter's cross-specie causes it to charge at them. When Doctor Alistaire Smythe find Gwen and her snuck in guest, Peter covers for Gwen by saying that he was the one who asked Gwen to sneak him in so he can see the new anion robots. This kept them from getting into serious trouble has Peter's lie gets Smythe to let the matter slid, before he tells the two that the animal turned cross-species the building are being exposed of as they speak. Even though Gwen trusts Smythe, she was worried of what he'll do to Peter if he were to learn about Peter's cross-specie blood; and that is why both Peter and Gwen decided to keep that fact from the good doctor. As the two lend a hand to transport one of the cross-species, however, Peter's presence causes them to go chaotic and Gwen ends up being bitten by the "rat man" after she got Peter out of the room . Knowing that Peter Parker can't help them, while Spider-Man can.

After Spider-Man got Gwen to the safety of the quarantine aria, where she'll be able to help him save the other affected scientists, Gwen tells Spider-Man that she too is affect and cannot not leave the building because of it. Since Connors was exposed to an earlier strain that has mutated in the new cross-species, the antidote that cursed the Lizard won't be able to help Gwen and the others because they too meet the same fate that fell upon him. Peter promises Gwen that he'll find a curse, before she gives him an OsPhone so they'll be able to stay in commutation with one another. Despite Gwen's feeling towards Connors, Peter knows that he is their best chance to create a cure and brakes him out of the asylum. This upsets Gwen when the news informs the whole city of what Spier-Man did, Peter tries to reason with her when she contacted him through computer. Gwen asks Peter to hurry in his mission for a cure, as she was beginning to feel like a prisoner in the sealed quarantine room.

The ship has support from being a canon ship and it being one of the main Spider-Man ships. PeterGwen is also one of the common rival ships of PeterMJ and SpiderCat. The Amazing Spider-Man films and The Spectacular Spider-Man animated series has inspired fans to support the ship, while many still prefer to have Peter with MJ or Felica, similar to how Gwen's spider-heroine counterpart has them shipping her with Miles Morales in Gwiles. Some prefer to have Peter with non-hero Gwen while others like the idea of having him ending up with Spider-Gwen, as the two are both web-swinging heroes who help each other out and can trust one another with their secrets. 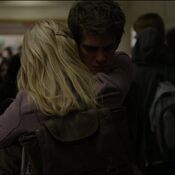 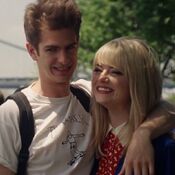 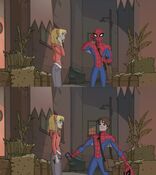 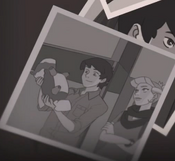 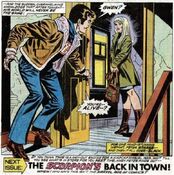 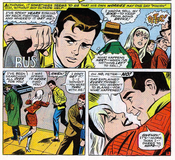 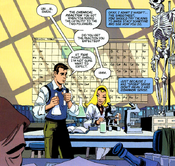 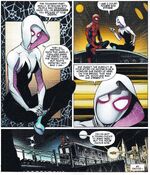 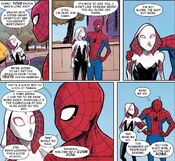 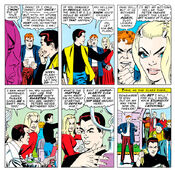 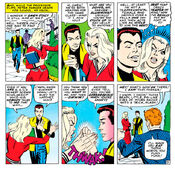 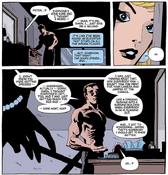 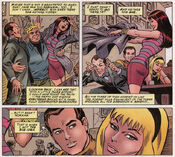 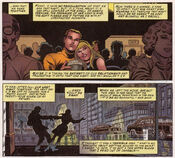 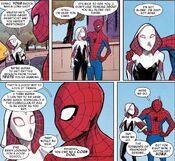 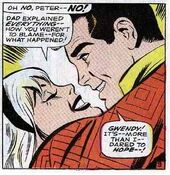 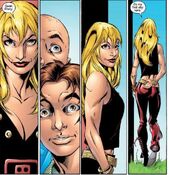 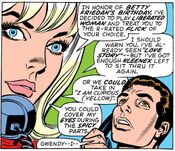 The Amazing Spider Man 2 Gwen and Peter- After Break Up

Spectacular Spider Man! Peter X Gwen (You Belong With Me)

The Amazing Spider-Man Peter Give Flowers To Gwen Scene

The Amazing Spider-man Uncle ban Peter and Gwen scene, You are on his computer