Sleeping Beauty
Once Upon A Time

Married (Disney and Descendants)
Together with child (OUaT)

Philora is the het ship between Aurora and Philip from the Sleeping Beauty and Once Upon A Time fandoms.

At the celebration of Princess Aurora's birth, young Prince Philip gets betrothed to her; and because he was a child while Aurora was a baby when they first met he wasn't so sure about her. As their young ages, as well as Aurora being raised under the name of "Briar Rose", being one of the main reasons they didn't know or recognize each other when they met years later as adults.

Philip goes for a horse back ride in the woods, he hears the eco of a woman singing and goes in search for her. His "pursuit" gets delayed when his horse accidentally gets his rider soaking water and has to layout his hat, cap and boats to dry; but when they got stolen by animals and searching of the thieves allowed him to eventually finds her. After switching places with the animals that stole from him, so they could serve as her "dream prince", Philip sings along with her until Briar Rose notices the switch. Because he is a stranger who approached her from behind un expertly, Briar Rose was nervous and unsure about him until they began to sing and dance together all while falling in love with each other. As he asks Briar Rose her name, however, she notices that it was time for her to head back home, but tells Philip where he can find her before they parted ways. After receiving her birthday gifts, Briar Rose tells her three cares of the man she is in love with, and because they weren't aware that the said man is Prince Philip, the three fairies tell Aurora that since her birth she has been betrothed to a prince, in which would prevent her and the man she is in love with can't be together.

When Philip returned to the castle, he tells his father of the girl he met and fell in love with in the woods, King Hubert had first thought that his son had found Aurora and was pleased with the fact, but he then became upset once Philip told him that it wasn't the princess but a peasant girl. Since Philip wasn't aware that Briar Rose and Aurora are one of the same. Because Philip wasn't aware that "the peasant girl" had left the cottage when he went to see her, he gets captured by Maleficent. Since she knew that it was where Aurora has been hiding for all those years and that the Prince is planning to see her there, the wicked fairy made sure that Philip would never awake Aurora with a true love's kiss, before she puts the princess into a death-like sleep.

Once the fairies learned that the man in the woods and Prince Philip are one of the same, and that he has been captured by Maleficent to prevent him awakening Aurora, they go to his rescue. Shortly after Maleficent touts Philip in how he'll never escape her dungeon or save Aurora from her cures, until he is an old man, unaware that help is very close by. With help from the fairies and their magic Philip is able to defeat Maleficent and teach Aurora, to give her his kiss of true love and once the princess woke up she smiled at him. With the threat of Maleficent and magic gone from the kingdoms and Aurora finally allowed to be with her birth family again, along with King Hubert seeing his son with the princess, both Philip and Aurora dance away to happy ever after.

Philip, Jr. is the son of the Once Upon A Time versions of Aurora and Prince Philip. As his name surjects, he is named after his father, and after Aurora became a first time mother she joins Mary Margaret (Snow White) in Ashley's Mommy & Me classes, so she could learn how to take care of him.

Audrey is the daughter of the Disney Descendants versions of Aurora and Philip. When Auradon Prep got four VK (Villain Kid) exchange students she didn't trust them, since one of them is the daughter of the evil fairy who used her magic to harm her family and wasn't happy when Mal "stole" her (former) boyfriend and was taking her place as the school's popular girl, until the four were finally excepted among the people of Auradon when they took on and defeated Maleficent. As well as both Audrey and Mal deciding to put their family's past actions towards each other aside, so they could become proper friends.

The ship has support due to its canon status in a Disney movie. After Ralph Breaks the Internet shows Aurora wearing modern-style clothes as her Netizen counterpart, a few fans were inspired to give Philip his own set of comfy modern clothes, while Aurora wears her RBIT clothes beside him. These outfits have been helpful for people who enjoy creating modern AU's. 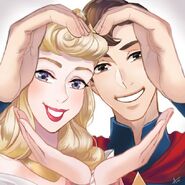 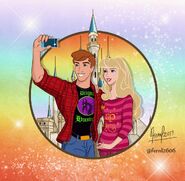