Photo Album is the femslash ship between Mahiru Koizumi and Ibuki Mioda from the Danganronpa fandom.

Before Super Danganronpa 2: Goodbye Despair, it is implied (during the second chapter's Twilight Syndrome Murder Case motive) that the two were friends during their years studying at Hope's Peak Academy. Their friendship has been presented on multiple occasions.

During the events of the game, Mahiru sometimes seems offput by Ibuki's eccentric behavior, as well as her taste in music and shameless way of handling Mikan Tsumiki's clumsiness. In general, Mahiru does not seem to agree with Ibuki's overall attitude. However, despite their obvious differences, they still consider one another friends, appearing to be quite close. In the Japanese version of the game, Ibuki refers to Mahiru by her first name, something she notably does for her friends. In return, Mahiru calls her 'Ibuki-chan.'

During the second chapter of the game, being prompted by the Twilight Syndrome Murder Case game, Mahiru invites all her friends featured in the game to speak with her. This included Ibuki. However, she does not attend this meeting. Ibuki later feels guilty about Mahiru's death in the Neo World Program because she did not accept the invitation from her friend.

Before the Tragedy, Mahiru was one of Ibuki's best friends. At Hope's Peak, as seen in the Danganronpa 3 anime, Mahiru is still shown to strongly dislike Ibuki's music, covering her ears during her performance at the school. However, during Hope Arc, Mahiru comes to Ibuki's rescue when she is targeted by one of the brainwashed snipers attacking Jabberwock Island, blinding them with a camera flash as they target the performing Ibuki. In return, Ibuki gives the photographer a heartfelt high five. The anime ends with the two of them, alongside Mikan, celebrating and spending time together on a ship.

The ship sailed due to Mahiru and Ibuki's friendship, which appears consistently throughout the games and anime. It was only fueled by Mahiru's rescue of Ibuki during Hope Arc, and the latter's positive and friendly response. The ship is often overshadowed by Mahiru's more popular ship with Hiyoko. Ibuki and Mahiru are both widely speculated to be LGBTQ+ in some way, thanks to their more common interactions with girls rather than boys. Ibuki is commonly heacanoned as bisexual, while Mahiru has received a decent amount of lesbian headcanons. Many seem to think that the idea of a loud, energetic rockstar such as Ibuki and a sensible and calm photographer such as Mahiru getting together is cute. 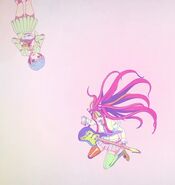 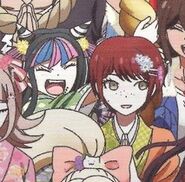 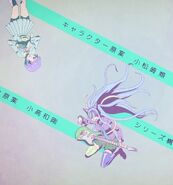 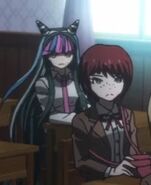 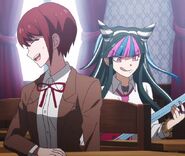 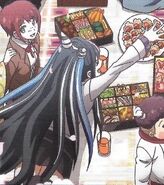