Shipping Wiki
Register
Don't have an account?
Sign In
Advertisement
in: Ships, Ships/Non-binary, Attack on Titan/Ships,
and 5 more

“I'll charm her yet. You watch.”
— Hange talking about Pieck

PikuHan is the non-binary ship between Pieck Finger and Hange Zoë from the Attack on Titan fandom.

Initially, Pieck Finger and Hange Zoë were enemies. During the Battle of Shiganshina, Pieck tries to kill Hange in order to retrieve Reiner, as Hange was trying to kill him. Four years later, they're still on opposite sides as the war rages on, but now Hange knows who Pieck and her allies are. The conflict is put to a halt, as they decide to join forces to win the battle against their common enemy, Eren Jaeger, and save the humanity from extinction.

First the two meet in the forest, when Hange, with heavily wounded Levi in tow, is looking for any aid that will come their way, and they stumble across Pieck and Magath. Hange calls for them and startles them. Pieck, still sitting at the nape of her Cart Titan, is about to attack them, but Hange begs them to stop and shows them they bear no arms. Hange tells Pieck and Magath that they have a common goal, to stop the Rumbling. As Hange starts discussing the details, Pieck notices that Hange is well too informed and addresses them as "titan doctor Hange". Hange forms an alliance with their former enemies, and Pieck, alongside with Magath, starts working with the 14th commander. They work out a plan to rescue Jean, Onyakopon, and Yelena, which Pieck carries out, abducting their allies and escorting them to Hange. When the Cart Titan spews them out, Hange asks Pieck if she ever brushes her titan's teeth, and Pieck notes that it's a rude question to ask a woman.

When Pieck is gravely injured by Falco, Hange helps her get on the boat by letting her lean on them as they walk together. As they start preparing the flying boat, Hange gives Pieck a chance to stay behind, but she seems determined as she says that Hange was right and they have to carry on with the plan for the sake of humanity. When Hange hears this, their eye, the one not coverer with an eyepatch, visibly widens; Hange look excited and they suddenly ask Pieck to let them ride her back the next time she will turn into a titan, so that Hange can feel the heat radiating off her body. Hange goes on to continue their line of thought, but Pieck interrupts them and disconcertedly puts them down. Levi, who witnessed the entire exchange, teases Hange about another unrequited love for Hange's record (since they've already had an unrequieted crush on the 12th Commander of the Survey Corps, Keith Shadis). And Hange responds by saying "I'll charm her yet. You watch", clearly showing their attraction to Pieck and their wish to get closer to her, by "charming" her. When Hange realizes they cannot all leave as someone will have to stay on the boat, they put on a cheerful mask and say goodbye to the rest of the group. Pieck departs, as Hange has to stay behind to hold their now common enemy off.[2]

It's Pieck's sixth most popular ship, and Hange's fourth most popular. This ship currently rivals PokkoPiku and LeviHan, which are the most popular ships for the two. The ship was born when fans noticed Hange taking particular interest in Pieck's character. Considering the two started out on the opposite sides of war and tried to kill each other, but then later settled their differences and found out they have much more in common, the fans of PikuHan enjoy exploring the Enemies to Lovers trope. Given Hange's vigorous and energetic nature and Pieck's calm and determined outloock, the two fit many tropes that the fandom loves so much.

Their incandescent dynamic inspires authors and artists to write fanfics about Hange flirting with oblivious Pieck (who might think they're still in a confrontation) and not getting in on it immediately, while others create humorous arts about Hange admiring Pieck from afar (like this). Some fanfiction works are centered around Pieck and Hange hiding in the forest after they've realized they're on the same side, and getting closer with each moment as they explore their feelings. Another popular theme is requited unrequited love, when both Pieck, who seems visibly indifferent, and Hange, obviously smitten, pine for each other, but Hange believes they don't have a chance due to Pieck's icy demeanor towards them. In some works, both art and fanfiction, Hange is an artist or a photographer, while Pieck appears as their muse and model (for example). Modern Day AU fan works (like this one) are especially popular. 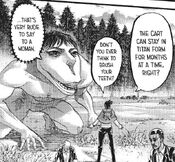 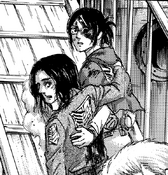 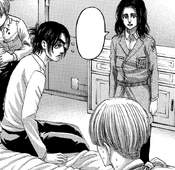 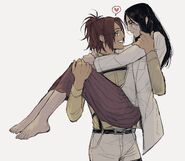 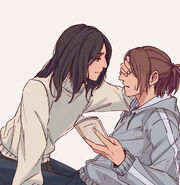 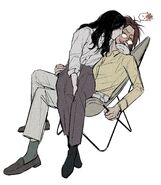