“Really? Even though we're always fighting together?”
— Pieck to Porco Galliard

PokkoPiku is the het ship between Porco Galliard and Pieck Finger from the Attack on Titan fandom.

The two are both titan shifters in the Warrior Unit subdivision in the Marleyan military, in which Porco was the Jaw Titan before his sacrificial death, and Pieck is the current Cart Titan. The two are shown to be close friends and got much closer during the Marley Mid-East War. Pieck also calls Porco the nickname "Pock" (ポッコ Pokko in Japanese) as a way of affection although, by the looks of it, Porco does not really like the nickname. It seems Pieck didn't make the nickname it self though, because Reiner called him "Pock" first when they were young. The two seem like they are close friends.

The two are shown working together assaulting their enemies in their bunkers in titan form as they're unauthorized to engage in combat. Eventually, Marley comes in victory. After the war, Pieck goes and visits both Porco and Reiner, who are currently recovering, and later leaves the room. Before Reiner leaves, Pieck tells Porco to not pick on Reiner and then collapses in a bed nearby Porco, to which he replies saying it feels like he hasn't seen Pieck for a long time. Pieck responds by saying they've been always been fighting right next to each other in battle.

Both Pieck and Porco are summoned to attend a meeting with Zeke at the Warrior's headquarters. Before the meeting starts, Porco stumbles upon a crawling Pieck, to which he reacts frightened and asks Pieck what she is doing. She tells Porco that it's much more natural for her to crawl on all fours due to the Cart Titan's build, as she stays in her titan form for a long duration of time. Porco asks Pieck if she can walk upright like a normal human.

Together with the rest of the warriors, the two attend the Liberio festival to hear Willy Tybur's speech. When they sit down in the seats prepared for the ambassadors of Marley, both Pieck and Porco get called away by a Marleyan soldier. The suspicious-looking soldier leads Porco and Pieck to an empty room, which happens to be a trap. The two fall into a pit that has a straw bed and fracture several of their bones. The two are then rescued by the Panzer Unit. As they escape the pit they notice the Survey Corps have had arrived to Marley, thus beginning the Raid on Liberio.

A few chapters later, Falco is shown removing Pieck's body from the Cart Titan as she's injured from the fight with the Survey Corps, Porco fears Pieck is dead thinks about the memories with her. He wants to avenge her by attacking Eren, although she is revealed not to be dead. Still, Pieck is greatly injured by the thunder spears used by the Survey Corps members and needs time to heal.

Pieck and Porco are both sent to Paradis to go after Eren, infiltrating the ranks of the Military Police and the Garrison. As Pieck finds Eren, she is handcuffed to Gabi and tells Eren she'll point out the enemies on the roof. Before heading to the roof, Pieck waves her hands at the soldiers and at Porco, disguised among the crowd as a Garrison soldier, notifying to him that she is handcuffed. As she heads to the roof, Pieck instead points at Eren and calls him her enemy, after which Porco bursts through the floor in his titan form in a failed attempt to eat Eren. After they get away, Pieck calls Porco to cut their chain, and he cuts off her hand for her to transform. Porco afterward dies as he sacrifices himself to Falco Grice.

During the battle on Eren's titan, Pieck and Jean are nearly killed but Porco and his brother Marcel save them. Pieck is shown to tear up and calls out for Porco and Marcel.

The ship sailed among fans when Porco found Pieck crawling on the floor on all fours during a comedic moment between the two that served to show the warriors as human. It's also considered to be one of the most popular scenes in the anime, especially with Pieck's famous words to Porco: "Ohayo Pokko" in the Japanese dub of the anime.

Pieck and Porco are close friends and there is a common fan theory that one might have feelings for the other (most believe this to be Porco, due to some fans interpreting Porco's reaction when Pieck hugged another male character in her team as jealousy), although it's never really shown due to the lack of appearances between the two and due to the fact Porco is deceased. The majority of shippers can be found on Tumblr.

Porco has shown his kindness toward Pieck. Because of that fact, many consider them a cute couple. PokkoPiku is a portmanteau of Porco's nickname in Japanese romaji, Pokko and Pieck's name in romaji, Piku.

Porco and pieck eating together 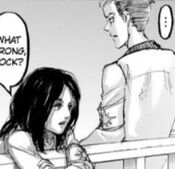 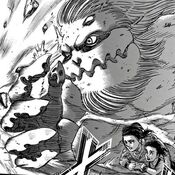 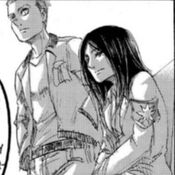 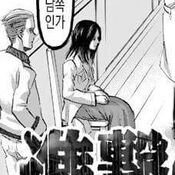 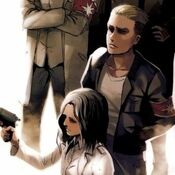 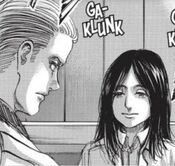 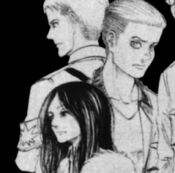 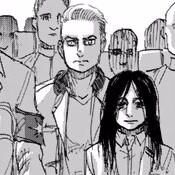 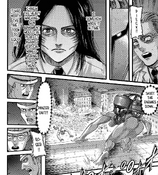