Princess Daisy is a character from the Super Mario and Super Smash Bros. fandoms.

Princess Daisy (デイジー姫 Deijī-hime) is the princess of the Sarasaland empire. She rules over the four kingdoms of Birabuto, Muda, Easton, and Chai. During the events of Super Mario Land, Mario rescues her from Tantanga. Ever since, she has acted as a friend towards the Mario Brothers and Princess Peach.

Daisy x Toad — the ship between Daisy and Toad

Peachaisalina — the ship between Daisy, Princess Peach and Princess Rosalina

Wenisy — the ship between Daisy and Wendy O. Koopa

Ever since her reintroduction, Daisy is portrayed as being close friends with Luigi. In multiple instances, the duo are implied to share romantic feelings with each other. Examples include their team names in the Mario Party series and official descriptions. Daisy has also referred to Luigi as 'sweetie' and someone who she can trust.

Before Mario Tennis, Princess Daisy acted as another love interest for Mario. Super Mario Land had Mario save the princess and her empire. From this, media such as Super Mario Kun and Super Mario Compact Disco have Daisy show romantic feelings towards Mario, with the plumber returning them. However, their relationship was never established and, after her reintroduction, the duo became friends instead.

The most common ships for the character are with Luigi or Mario. This is due to their implied romance with the Sarasaland Princess at some point. Out of the two, Luaisy is found to be more common. Femslash pairings such as Peaisy and Daisylina are typically due to her friendship with them or similar aesthetics. Some have even formed an OT3 with the trio in the form of Peachaisalina.

For crossover, Richter Belmont is typically paired with Daisy. This is due to them both being echo fighters and Richter helping Simon save Luigi in a trailer for Ultimate. Palutena and Daisy may also be paired together as well. The ship boomed after a pre-release tournament in which Daisy perfectly avoided Palutena's final smash. Some have also only portrayed the duo as friends for jokes.

On AO3, the Princess Daisy tag currently has over 300 fics. For the Super Mario fandom, this ranks her at 5th place. FanFiction.net has 800 for Super Mario and 70 for Smash. In total, this gives her nearly 900 stories. 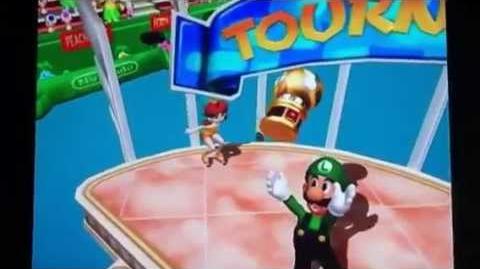 Retrieved from "https://shipping.fandom.com/wiki/Princess_Daisy?oldid=198285"
Community content is available under CC-BY-SA unless otherwise noted.