QiTao is the friendship between Hu Tao and Qiqi from the Genshin Impact fandom.

In Hu Tao's Story in Story 4, it mentions that Hu Tao decided, as her self-proclaimed true friend, she should grant Qiqi eternal peace. So Hu Tao starts going on just to kidnap Qiqi several times following much deliberation in every instance, including calculating the most auspicious time for the ceremony. After which she would place Qiqi in a tomb on the outskirts of the city.

Every time when Baizhu manages to catch up with them, Qiqi would have been packed in a bag, with just her head sticking out. In utter confusion as Hu Tao was digging a hole for the pyre. Afterwards, Hu Tao would always sent an apology letter.

It was said that in Hu Tao's eyes, Qiqi passed away a long time ago, but has been trapped in this world and cannot free herself of her eternal suffering. She only wanted to bury Qiqi not only out of consideration for her friend but also to restore the natural order.

It was said, ever since, Hu Tao's attitude towards Qiqi has changed drastically. To the point that she would pamper her. And unfortunately, the damage has been done and Hu Tao has become Qiqi's bugbear.

In Qiqi's Story in Story 1, it was said that whenever she meets Qiqi, she would say: "It would be easier if you just let me bury you.".

In Hu Tao's Voiceline about Qiqi, Hu Tao asks the Traveler if they have seen Qiqi. She then tell the Traveler that she need to go seal her away. Meaning that, Hu Tao is willing to dig up a grave for Qiqi.

On the Feiyun Slope Bulletin Board, Hu Tao wrote a response to Baizhu's message in which she reply that he should hand Qiqi over to be buried by the Wangsheng Funeral Parlor, meaning that Hu Tao offers to bury her.

“Have you seen Qiqi? Tell me where she is, quickly. I need to go seal her away, hee-hee!”
— Hu Tao's Voiceline about Qiqi

“I despise Hu Tao. I need cold, but she is too hot-blooded. I cannot smile easily, but she cannot smile convincingly. She wants to bury me, so I wish she was dead.”
— Qiqi's Old Voiceline about Hu Tao

QiTao is a popular friendship within the fandom even though Qiqi dislikes Hu Tao, QiTao has gained a lot of popularity as a meme due to Hu Tao wanting to bury Qiqi and while Qiqi disliking Hu Tao. The two were also featured in a popular fan song that was about Hu Tao, being that, the two appeared at the ending of the fan song. There are currently 19 fanfictions depicting the two as gen. 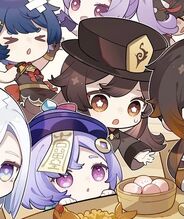